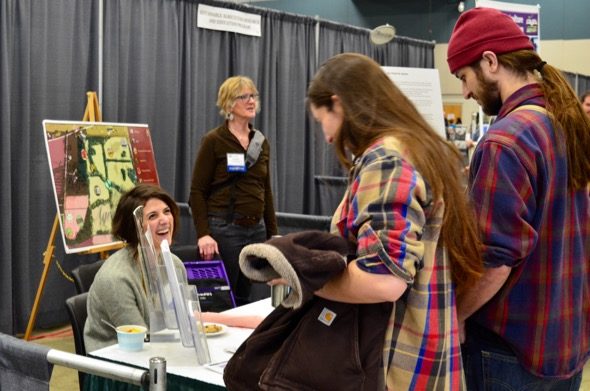 Community Solutions was one of several Yellow Springs organizations who, along with other locals, attended the Ohio Ecological Food and Farming Association annual conference in February. From left is Julia Honchel and Amy Harper of Community Solutions, which was there to promote its Agraria regenerative agriculture farm, and two young farmers. (Photo by Megan Bachman)

This post is part of a new blog series in which I go to an interesting event in or around Yellow Springs and write about it.

When last year’s statewide organic food and farming conference shared convention space with a workshop for pesticide applicators, it was the perfect symbol of our divided country just a few weeks into the Trump presidency. The groups occupied different floors of the Dayton Convention Center, and also different realities.

While not as explicit, the polarization of American society was a theme of this year’s Ohio Ecological Food and Farming Association conference too. But if there is common ground to be found with those of such extreme ideological differences, what better the actual ground beneath our feet. 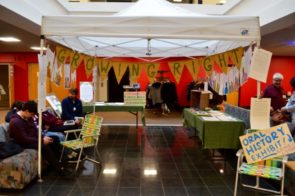 An oral history exhibit at the 2018 OEFFA conference

In fact, the principles of organic farming — a focus on diversity and listening to nature — translate well into social change, according to one speaker, Sean McGovern of the USDA’s Sustainable Agriculture Research and Education Program.

McGovern shared with the group of organic farmers and food producers, farming educators, local food organizers and activists and other assembled at the annual event in February how to “bridge the divide in America.” He said he dreamed of a world where “vegan bakers broke bread with livestock producers,” and “rural commodity farmers sat down with urban homesteaders.”

“How do we tend to the land and heal our communities in the time of dysfunction and divisiveness? How do we respond to talking heads that exploit false dichotomies for their own gain, that encourage us to hate one another and fear for our future?” McGovern asked. His answer? Diversity.

“Diversity is an essential component of any sustainable system,” McGovern said. “So whether they exist in our minds, in our fields or in our neighborhoods, we will we need to diversify our ‘monocrops’ or we will perish,” he said, naming African Americans, migrants and other marginalized communities as “solely underrepresented at our table,” making the organic farming community “collectively poorer and less resilient as a result.”

“Our shared commitment meant to diversity, to listening to nature and to one another is more valuable and precious now than ever before,” McGovern concluded. 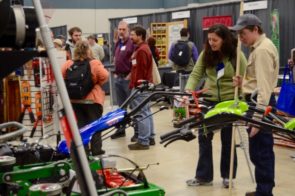 An OEFFA attendee learns about a walk-behind tractor

As McGovern received a standing ovation on the conference’s final day, I looked out to the crowd and saw a demographic that did indeed lack people of color, which is not unusual for many of the environmental events I attend and no less concerning. At the same time the event was quite diverse on the spectrum of age, with older grey and white-haired farmers in equal proportion to the green youth — the “Millennials.” They were similarly dressed too, in flannel shirts with vests, beanies and boots. There was much inter-generational transfer going on, which gave the event a feeling of hope, despite the lack of racial diversity that was particularly stark as it was being held in downtown Dayton.

Yellow Springs was well represented, as it always is, and Antioch College and Community Solutions each had a table in the exhibit hall, promoting the college farm and its associated food program and the Agraria regenerative farm, respectively. 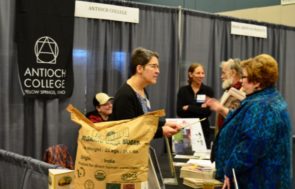 Although last year I thoroughly enjoyed a session on how to make fruit cordials and herbal liqueurs, this year I was most excited to hear the national activist Stacy Malkan talk about, in her words, how “food companies are manipulating policy behind the scenes to have license to poison.” 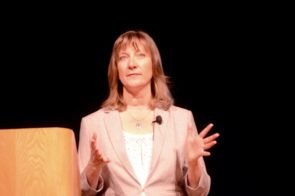 Malkan’s words may sound harsh, but she had ample evidence to back up that claim. Her organization, U.S. Right to Know, has documented through Freedom of Information Requests and other public information how seed and chemical companies Monsanto and DowDuPont and others attack the organic food industry. They do so by manipulating public opinion, policymakers and science by funding academics, conferences and studies through obscure front groups.

“They realize the public doesn’t trust them to put out their message, so they get the professors to do it for them,” Malkan said.

Malkan said the companies also create “the fake news about the future of food” by perpetuating a narrative that GMOs are necessary to feed the world, despite research that organic can be as productive. At a recent event co-hosted by the national magazine, The Atlantic, genetic engineering, growing meat in labs and growing GE algae to create favors were promoted, while the Atlantic didn’t widely disclose the fact that the event was sponsored by the agriculture division of DowDuPont, the merger of two U.S. chemical titans and a major pesticide and GM seed producer, Malkan said. 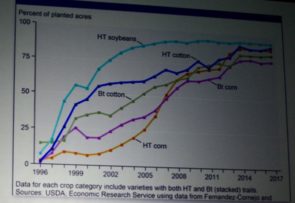 A graph showing the dramatic growth of genetically-modified crops since 1996, from Malkan’s talk

“Their narrative is that to feed nine billion people in 2050 will require genetically engineered foods to grow faster and to adapt to climate change,” Malkan said. “But is anyone at the table [at the conference] going to raise the question of those company’s toxic legacy?”

In another case, Malkan pointed to a book written byJulie Gunlock, the Director of the the Culture of Alarmism Project at the Independent Women’s Forum, called “From Cupcakes to Chemicals,” which ridicules women for feeding their children organic food. Malkan puts the group’s name in quotation marks though, because the forum partners with Monsanto, and receives the bulk of its funding from the Koch Brothers, whose Koch Industries is a large producer of petrochemical fertilizers. 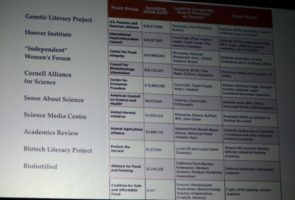 Front groups and their funders, from Malkan’s talk

“They are telling women that freedom is the freedom to let corporations do whatever they want,” Malkan said of the group.

“It has reached a level of absurdity that is both scary and telling,” Malkan said of all of the front groups she exposed. “Because they are on the ropes, they don’t know how to deal with a market that doesn’t want to buy their food. And that’s where we are winning and winning in a big way.”

As evidence for her optimism, Malkan said the top 25 food and beverage companies lost $18 in market share between 2009 and 2015, while the massive food lobbying group, Grocery Manufacturers of America, split up over the disagreement about whether to label GM ingredients. She also shared a slide that showed that organic food sales more than doubled between 2006 and 2015, driven largely by women who purchase 85 percent of consumer products in America. Another sign for hope is in the demographics, Malkan said.

“Millennial moms are the biggest groups of organic buyers in America,” Malkan said of the data, “And only 25 percent have had children.” 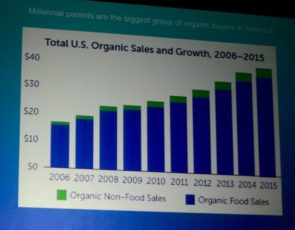 The bright side: organic sales are growing strong (graph from Malkan’s talk)

As for the bad news? The consolidation of corporate power in agriculture (the top four — DowDuPont, Syngenta, Monsanto and Bayer — had a combined $150 billion in revenues in one recent year, Malkan said), and, unfortunately, “corporations are better focused than political parties.”

As brows furrowed and sighs accumulated in Malkan’s later workshop facing the terrifying trifecta corporate power, polarized communities and broken policy making, OEFFA policy program coordinator Amalie Lipstreu ended the conference with a plea to “not get pulled down by the negativity” or “get turned off by the system” but to engage with those on the other side of the political spectrum.

“Things are only going to get worse if we stay in our camps,” Lipstreu said. “There has to be a willingness on both sides … to find the common ground that we have. Those who are profiting off of this and hurting people, animals and the environment would love to see us fight with each other.”

Maybe next year the pesticide applicators and organic farmers will sit down for coffee.