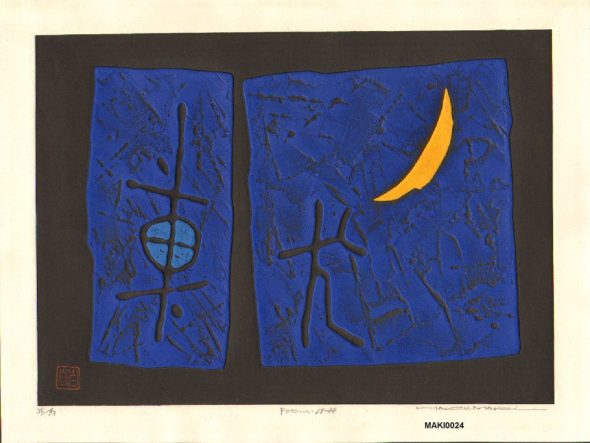 The moon this morning is a golden horn. To the south and west, the planets are shining — Jupiter, Venus. Yesterday at the same morning hour the moon was a creamy horn, caught, like an animal in a thicket, in a mesh of trees. This morning the animal is grazing further east, in a clear field of sky, and that horn — it has changed its aspect; it is gleaming with a new light that is also an old light, observed by poets and others for thousands of years:

The windy forest is checkered
By the light of a setting,
Waning moon. I tune the lute,
Its strings are moist with dew.

So wrote the Chinese poet Tu Fu more than a thousand years ago. In poem after beautiful poem, the moon appears — now “isolate and full,” now a crescent past new. At the time of Tu Fu’s writing, I suspect the moon was already a “trope,” a subject for poetry. Yet to say that does not diminish (rather, it testifies to) the moon’s power, its numinous nature.

What do we (poets and others) talk about when we talk about the moon? I think mainly this: that the world is the same and not the same. We look, always, at the same moon. Yet how different it appears, and how different it will go on appearing for every night of our planet’s life. This is the nature of our lives and the one Life that enfolds us. The same, not the same. The same river, but never the same water.

The moon reminds us of this. No, not reminds. The moon is this; it enacts, it is in its nature to enact, a now-bold, now-delicate drama of permanence/impermanence. Complete with costume changes! When we look up at the sky, even briefly, even blindly, as we sometimes do, the moon’s truth looks back. And though we may not see this truth, this truth sees us. Because we are small and the world is big, we do not have to see things for things to be true! And to flow their truth into us, like the “bright gold” of moonlight on a river:

Isolate and full, the moon
Floats over the house by the river.
Into the night the cold water rushes away below the gate.
The bright gold spilled on the river is never still.

(Translations from “One Hundred Poems from the Chinese,” by Kenneth Rexroth)