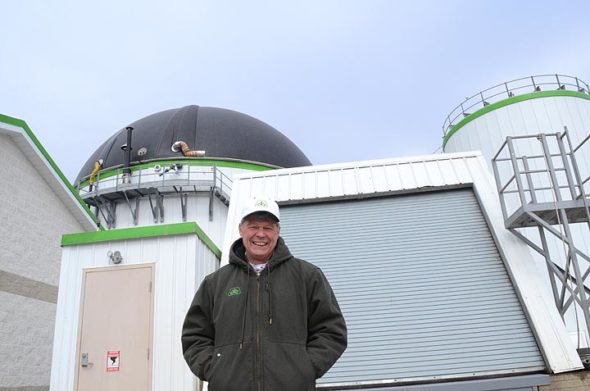 Local farmer Tom Pitstick leases part of his family farm on Herr Road to Dovetail Energy to operate a biodigester. The biodigester turns manure from Pitstick’s hog operation, along with area food waste and sewage sludge, into renewable energy and fertilizer that is spread on local elds. The photo shows Pitstick at the biodigester facility during an open house last weekend. (Photo by Megan Bachman)

SEE UPDATE TO THIS STORY AT THE END

“Human waste on farms? It’s happening. Join the discussion,” read signs erected along residential properties down the road from a Bath Township biodigester.

Now, a proposed expansion at the biodigester is drawing increased public criticism of the facility, as well as the related issue of the application of its liquid fertilizer product to nearby farms.

“The biggest issue is the location of this facility — it’s too close to houses,” said Kassie Lester, who lives about a half mile away on Herr Road. Lester said she smells odors from the biodigester and its onsite lagoon, as well as the nearby fields where the fertilizer is applied, about 20 out of 30 days each month.

“You can’t open your windows, you can’t breathe outside,” Lester said of the worst days.

Neighbors have also cited the potential for the fertilizers to run off into area streams and contaminate the groundwater with pharmaceuticals, heavy metals, antibiotics and other chemicals from municipal sewers. Renergy, the parent company of Dovetail Energy that operates the biodigester, claims the fertilizer meets EPA requirements and that the process is a sustainable way to deal with waste.

According to Renergy’s Strategy and Marketing Director Cari Oberfield, the biodigester keeps waste out of landfills, where it would off-gas CO2 and methane, instead using it to produce renewable energy and a fertilizer rich in organic matter that improves the soil of area farms.

“There isn’t a better, more sustainable solution,” Oberfield said. “The only other alternative is landfills.”

Renergy has applied for a permit to install from the Ohio Environmental Protection Agency’s Division of Surface Water to expand and upgrade its biodigester facility. The Ohio EPA will hold a public hearing for the application at 6 p.m., Thursday, March 22, at the Greene County Career Center, 2960 W. Enon Road, Xenia. The public is also invited to submit written comments by Friday, March 23, to EPA.dswcomments@epa.ohio.gov.

The EPA will not be considering ancillary issues such as the land application of the fertilizer, truck traffic or zoning considerations in deciding to grant the permit, according to EPA spokesperson Dina Pierce this week.

“Whether the community likes it or doesn’t like it is unfortunately not allowed to determine what we consider,” Pierce said, adding that public comments do help the agency determine whether to add stipulations and that odor concerns are an important factor.

“”The permits we write are designed to be protective of public health and the environment, which is why the public comment phase is important,” Pierce said.

Renergy hopes to add a second 1.74 million-gallon digester tank (it currently has a 700,000-gallon digester) along with other tanks to start pasteurizing its waste. The upgrades will allow the company to more thoroughly process the wastes, extract more methane, and produce a solid fertilizer product the EPA designates as of “exceptional quality,” Renergy representatives said.

Lester fears the proposed expansion will bring more odors, truck traffic and fertilizer applications to her neighborhood, which before the biodigester was built in 2013 was “peaceful and quiet.” However, Logan Randlef, director of operations for Renergy, maintains that the upgrades will not result in the processing of more waste but instead will yield a fertilizer that is “a superior product.”

“The more you can digest and break down the material, the less odor you have,” Randelf said.

According to the U.S. EPA, biodigesters use an anaerobic process in which microorganisms break down organic materials. For that reason, biodigesters are sometimes called “mechanical stomachs.”

At the Bath Township biodigester, the organic material, including animal manures, sewage sludge and food scraps, is churned in a large tank, where it releases methane gas as it breaks down, according to Operations Manager Ron Schaffer. That methane is then burned to produce electricity.

Currently, the biodigester processes 50,000 gallons of biosolids per day, and generates 1,000 kilowatt-hours of electricity, 700 kW/h of which are sent back to the grid to power an estimated 800 homes per year, Schaffer added.

The other product resulting from the process is a liquid fertilizer that sold to area farmers to apply to their fields, according to Randlef.

“Farmers pay for us to apply it, because it is an excellent fertilizer, it has everything the crops need,” Randlef said.

The Ohio EPA regulates each farm that received applications and requires testing for pathogen counts, heavy metals and their likelihood to attract vermin such as insects and rodents, according to Pierce.

Because the liquid can be difficult to transport, it is mostly applied in the area surrounding the biodigester, Randlef added. Pitstick, for one, applies the fertilizer to the 1,500 acres of farmland he farms in the area.

Pitstick also contributes the hog manure from the 7,000 hogs he raises onsite to the biodigester. That is mixed with sewage sludge from Yellow Springs and other neighboring municipalities, including Fairborn and Beavercreek. Some 72,000 gallons of sludge from the Village are transported to the biodigester each month, according to Oberfield.

But the majority of the biodigester’s feedstock, about two-thirds, is waste from food manufacturers, including Tyson Chicken and Kroger, according to Oberfield. The variety of manufactured food products whose waste materials are processed includes tortilla chips, cereal, chicken products, bacon and popcorn, Randlef said.

If the facility upgrades are permitted by the Ohio EPA, the biodigester will pasteurize its waste, which is a process of heating up the material and holding it at higher temperatures, Randlef explained.

“You are guaranteed to kill more pathogens,” Randlef said of the pasteurization process.

Currently, Renergy produces a Class B biosolid fertilizer, which must come in below the EPA regulatory limit of 2,000,000 most probable number per gram of fecal coliform pathogens. However, after the upgrade Renergy hopes to meet the more stringent requirement for an “exceptional quality” biosolid of 1,000 mpn/g.

The EPA also requires that Renergy comply with limits on heavy metals, including arsenic, lead, mercury and others, which Renergy claims are found in levels far below EPA ceilings.

Tracy Silvert of Birchton Place in Fairborn said a noxious odor from biosolids has permeated her neighborhood for three months. Since she lives a few miles north of the biodigester, she speculates it is the field adjacent to her home, where the biodigester’s fertilizer is applied, that caused the stink.

“I am hoping that the horrible odor that permeated my neighborhood pretty much the entire month of December of 2017 is not something that will repeat,” Silvert wrote in a letter to the Ohio EPA last month.

“I am pro-farm, but that was too much to tolerate,” Silvert added.

The Ohio EPA responded to Silvert that odors from fields applied with biosolids should be minimal, especially since they required in this case that the fertilizer be plowed into the field after application.

“We would expect any odors to be minimal but not nonexistent with a biosolids program that is complying with our rules and regulations,” Ned Sarle, of the Ohio EPA’s Southwest District Office, wrote.

Silvert said she she is unsure if she is satisfied with the EPA’s response since they didn’t experience “the full effect of the odor.” She is also concerned about the health of the local ecosystem more generally, citing a biosolids application site south of Yellow Springs-Fairfield Road at Byron Road where a recently applied farm field contained “pooling water from rainfall that was clearly draining into the ditches that run along the roads,” Silvert wrote to the News.

“I am concerned about possible contamination of drinking water or seepage onto adjoining properties,” Silvert wrote.

“Bottom line is we need to be able to enjoy being outdoors without feeling sick from the terrible odors,” Silvert added.

Lester, the Herr Road neighbor, is also concerned about area waterways and groundwater, especially since most people in the area use well water. She is also worried that the onsite lagoon may breach and contaminate the groundwater.

Villager Sharon Moehler shares the concerns that applying biosolids to area farms could negatively impact the ecosystem, not due to human waste but because of the industrial and pharmaceutical chemicals that may be mixed in, she said.

“The only human part that bothers me is that all of the hormones and medications that go through people are still there when the sewage goes on to the field,” Moehler said. “Those things can go into the food and into the general biomass of worms and animals.”

Addressing neighbor concerns this week, Randlef, the Renergy director of operations, said it’s true that there is some ambiguity over the composition of the waste they receive. However, he added, the quantities they work with and the thoroughness of the process means it is unlikely there are contaminants at the end.

“Admittedly there’s a lot of uncertainty in terms of what’s in biosolids and where they come from,” Randlef said. “But when you start talking about trace amounts of pharmaceuticals, antibiotics and narcotics, it’s hard to even test for it.”

While he “understands the fear related to some of those issues,” Randlef added that the proposed upgrade will only improve the quality of the fertilizer.

“From our perspective the digestion process helps to break down any of those elements and the pasteurization will help refine it even more,” Randlef said.

Ohio EPA’s Pierce said that research is currently being done at the federal level on “pharmaceuticals and chemicals that remain in biosolids after treatment,” and that the current rules are protective of human health and the environment based upon the latest science available.

Tom Pitstick, who has been farming for decades on a nearly 100-year-old family farm on Herr Road, defended the location of the biodigester in the predominantly rural area.

“We’re at a good location because the end product is fertilizer,” Pitstick said.

Pitstick speculated that much of the odor concern is likely from his Confined Animal Feeding Operation of hogs, while neighbors worrying about well water contamination may look to their own septic system as the culprit. In general, many misunderstandings may result because “people are so far removed from farming,” he said.

Pitstick, a Bath Township Trustee, said he leased the land to Dovetail Energy to build the biogester in a mutually beneficial agreement whereby his hog manure would be more sustainably processed, he would receive free electricity for his farm and homestead and he could access biosolid fertilizers for the corn and soybean fields he farms. The arrangement has helped him stay in an increasingly precarious farming business.

“The biodigester definitely helps,” Pitstick said. “It’s tough right now with grain prices, and the margins are really thin, so anything we can do helps in this area.”

A Bath Township biodigester upgrade will move ahead, but at a much smaller scale.

In September 2018, the facility received a permit to install several new heating and storage tanks. The biodigester company had originally applied to add a 1.7-million-gallon tank at the facility, which already has a 700,000-gallon tank, but canceled that plan after an EPA hearing in March, when neighbors complained about the expansion’s potential to negatively impact the local environment.