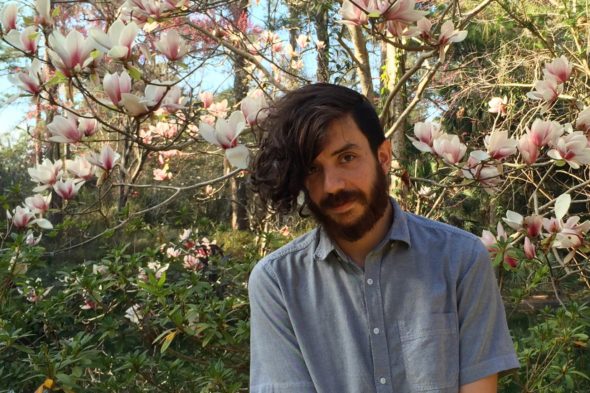 Acclaimed poet Kaveh Akbar is coming to Wright State University as part of its Visiting Writers Series, which kicks off tonight. (See full schedule below.) Akbar will read Tuesday, April 3, at 3:30 p.m., in the Stein Galleries at the Creative Arts Center.

Born in Tehran, Iran, Akbar recently published his first full-length book, “Calling a Wolf a Wolf,” as well as a chapbook, “Portrait of the Alcoholic.” Both books deal soulfully with the struggles of addiction. A teacher of poetry at Purdue University and the recipient of numerous national poetry prizes, he is also founder and editor of Divedapper.com, which features two interviews a month with significant contemporary poets.

The News recently did a short interview with Akbar, asking him four questions by email.

News: What is a poem? How is it different from a story, an essay, a prayer?

KA: I like Mary Leader’s definition: “A poem is a thing.” All narrower definitions feel to me a bit claustrophobic.

News: What moves you to write a poem? What’s the core impulse for you? Is writing a form of spiritual practice for you?

KA: Writing is deeply tethered to my spiritual and psychic life. It’s where I go to sound my psychic and mental waters. It’s also the purest, most unassailably good source of delight in my life.

News: Talk a little bit about how you read poems (meaning poems that you read silently on your own). How do you approach a poem? Is there a particular inner stance? What are some ways to not approach a poem, in your experience?

KA: I break out in hives when I hear people try to flatten a poem to some one-to-one correlation with reality: “Does the moth represent her mother?” “Did he really think all that while looking at a Grecian urn?” Horace said that the purpose of poetry was to “delight” and “instruct.” That’s a pretty good way to think about how to read poems as well.

News: What do you hope readers “get” from encountering your poems? What’s your relationship or connection to those readers (mystically, metaphysically or otherwise)?

KA: My relationship to the people who read my poems is one of intense gratitude. I’m not entitled to anyone’s time, and when someone gives it to me, I try to pay it back with some measure of delight or surprise or access to unprecedented experience (of living, of feeling, of imagining).

Supported by the Carol H. Cline Foundation, Wright State’s Visiting Writers Series is free and open to the public. Here is this spring’s line-up:

TONIGHT, Tuesday, March 27: Nonfiction Writer Elissa Washuta
5 p.m., Stein Galleries
Elissa Washuta is a member of the Cowlitz Indian Tribe and a writer of personal essays and memoir. She teaches at the Ohio State University and is the author of two books, “Starvation Mode” and “My Body Is a Book of Rules.”

Tuesday, April 3: Poet Kaveh Akbar
3:30 p.m., Stein Galleries
Kaveh Akbar‘s poems have appeared recently in the New Yorker, the New York Times and elsewhere. He recently published his first book, “Calling a Wolf a Wolf,” as well as a chapbook, “Portrait of the Alcoholic.”

Thursday, April 19: Poet Will Schutt
3:30 p.m., Stein Galleries
Will Schutt is the author of “Westerly,” winner of the 2012 Yale Series of Younger Poets award. He is also a translator of poetry from the Italian.

Yellow Springs resident Christopher DeWeese, a poet and associate professor of English at Wright State, coordinated this spring’s Visiting Writer Series. Read more about the series and individual visiting writers in the March 29 issue of the News.

One Response to “Four questions for poet Kaveh Akbar”