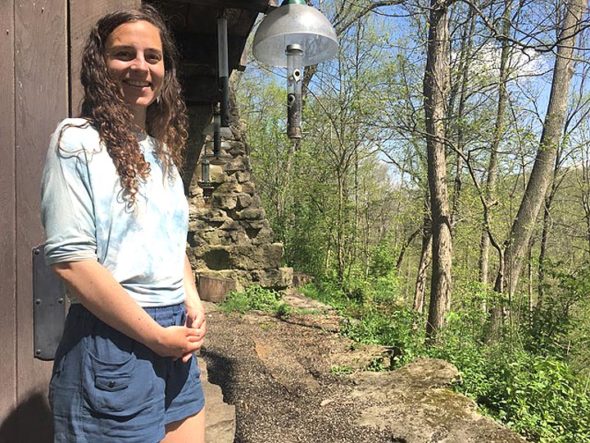 Environmental educator Emily Foubert has started the Bird Language Club at Glen Helen’s Trailside Museum on the second Saturday of each month. The next meeting, open to all, is this Saturday, May 12, from 9 a.m. to noon. (Photo by Diane Chiddister)

Going deeply into the natural world

Walking from her Xenia Avenue apartment to the Glen recently, Emily Foubert heard some commotion. On the front lawn of Antioch College, flickers were sounding their alarm calls, signaling that the birds felt threatened.

“When a flicker alarms, I take notice,” Foubert said shortly after. “It has a piercing call that goes through the forest.”

Because the Antioch front lawn is a place Foubert regularly sits to observe the natural world, she knew of a few possibilities. A red-shouldered hawk was making a nest in the area, perhaps alarming the smaller birds. Then robins and jays began making alarm calls as well. While Foubert wanted to stay to investigate, she had to keep walking to make her appointment.

“There’s a lot of mysteries,” she said. “I’m always listening to bird language.”

This spring, Foubert has begun sharing her passion for bird language with others. In February she began a monthly Bird Language Club at the Trailside Museum of Glen Helen, on the second Saturday of each month, from 9 a.m. to noon. The next meeting is this Saturday, May 12. The event is open to all, and donations  are encouraged.

To some local birders, Foubert’s gatherings have deepened their own love of the natural world.

“Emily’s bird talk workshops teach us to use our ears as a vital source of information in the woods, revealing a whole new world of sound,” Mary White wrote in an email this week. “Some might call this kind of listening a form of mindfulness; for me it is similar to what I bring to music. But as Emily shows us, this is meaningful sound, communicating the daily dramas of bird life in our neighborhood.”

To Ed Amrhein, Foubert has brought new awareness to a favorite activity.

“Emily returned to Yellow Springs with a ton of experience and a wealth of knowledge about the natural world,” he wrote this week. “She ably combines these with an infectious, even childlike glee in topics we’re examining. For me, the result is a depth of appreciation for and understanding of Glen Helen I had not achieved in 46 years of hiking there.”

The upcoming gathering this Saturday is significant since it takes place at the height of bird migration. Those who attend might hear not only the usual robins or sparrows but a migrating yellow-throated vireo or scarlet tanager.

“The chorus will be larger,” Foubert said.

Still, her main interest won’t be hearing the sounds of birds unusual to the area. Rather, it will be strengthening participants’ ties to the common birds of the Glen.

“It’s about connecting to the birds that are here all the time,” she said. “What are the goldfinches doing? Where are they nesting? Are there nest robbers around?”

Foubert approaches the natural world in a way different from most. While she can hold her own in the company of birders who know the names and calls of most birds, she’s not after species identification. Rather, she wants to share with others her knowledge of the relationship between birds and their environment. While individual bird calls are the “what” of birding,  bird language is the “why,” she believes.

For example, at that moment on a sunny May morning, Foubert heard a titmouse in the distance.

“It’s singing, feeling comfortable,” she said. “There’s no predators around.”

Foubert starts off each Bird Language Club sharing information about bird behavior, such as the different categories of bird calls and their purpose — for mating,  warning or communicating with each other, for example. Foubert refers to the book “What the Robin Knows,” by John Young, who has learned bird language by studying the indigenous hunter-gatherer world of the Bushmen in Africa,

After the presentation, bird language participants claim a spot outside where they sit for a half hour or so. During that time, they just listen. They might hear bird calls of alarm as hikers and dogs head down the stone steps. Or they might hear the trilling melodies of mating calls.

During this time, Foubert is offering  what she most values: time to just sit and listen, to observe the natural world. She encourages others to find an accessible outdoor place at home and make it their “sit spot,” where they come regularly to listen and observe the sounds of nature.

Having such spots deepens our connection to the natural world, she believes. Besides the front lawn at Antioch, she has a spot in her backyard where she sits regularly.

“Going to the same spot day after day, you create a relationship with the natural world,” she said. For instance, in her sit spot she recently heard a titmouse make its first mating calls of the season.

“To be present for that, you feel connected to the space,” she said.

And feeling connected to a specific spot in the natural world helps us to connect to ourselves, she believes.

“What keeps me sane and connected with myself is walking in nature,” she said.

For the last hour of the bird language club, the group gathers inside the museum again to make a map of what they just experienced. Participants share what they heard and saw, and together look at how the bird sounds were responses to the world around them.

Foubert links her passion for a “deep nature connection” to her childhood in Yellow Springs. As a student at the Antioch School, she and the other students explored the Glen often. Her Older Group teacher, Chris Powell, allowed her students to sit in the Pine Forest when they wrote poetry.

“She just gave us a space to sit and be quiet,” Foubert said.

After graduating from Yellow Springs High School, Foubert went to Beloit College, where she studied cultural anthropology. Following graduation, she moved to California to train as a firefighter. There, during long days in the woods, she discovered a passion for the natural world.

“I realized I wanted to know more about birds and plants,” she said.

So next Foubert served as an environmental education intern at the Aldo Leopold Nature Center in Wisconsin.

“I loved it,” she said. “I came home  each day feeling ecstatic and alive after spending the day with kids in the natural world.”

Along with her own joy in the work, Foubert began getting feedback from her mentors that she seemed a “natural” as an educational environmentalist. So she traveled to Wolf Ridge Environmental Learning Center in northern Minnesota, where she spent another year learning. Following that, she was hired as an interpretive naturalist in a Twin Cities park district, which initially seemed a dream job. But Foubert soon realized that her duties, including keeping children busy with science experiments rather than providing them the freedom to explore nature on their own, didn’t mesh with how she wanted to teach. So when she discovered the nonprofit center Weaving Earth in Sonoma, California, with a focus on “relational” environmental education with the natural world, Foubert felt right at home. She stayed there a year.

And at Weaving Earth, she had her first encounter with bird language.

“There were all these people sitting in oak groves, just listening to birds,” she said.

While the California nonprofit fed Foubert’s desire for a new way of interacting with nature, recent health problems intensified. Specifically, back and pelvic pain began keeping her from sitting down, or driving, until she couldn’t work at all.

So Foubert came home, to Yellow Springs, seeking the healing of friends and family — she’s the daughter of former Mayor David and Diane Foubert. She found a doctor in Indianapolis who is helping her heal, and begin to move on.

“Now I can step into those burgeoning passions of mine,” she said.

One passion, aside from bird language, is her desire to start her own center that allows her to share her passion for a “timeless connection” with the natural world, especially with children. It’s not yet clear how or when this will happen, but she’s exploring possibilities.

And coming home — connecting with a place she knows well — fits right into Foubert’s passion for knowing a place more deeply.

“I’ve been to a lot of places,” she said. “There’s something special about Yellow Springs. How lucky we are to grow up in a place with so much love and care surrounding us, to become who we should be.”

It’s a deep connection, she believes, the sort of connection she values most, and it will only grow deeper.