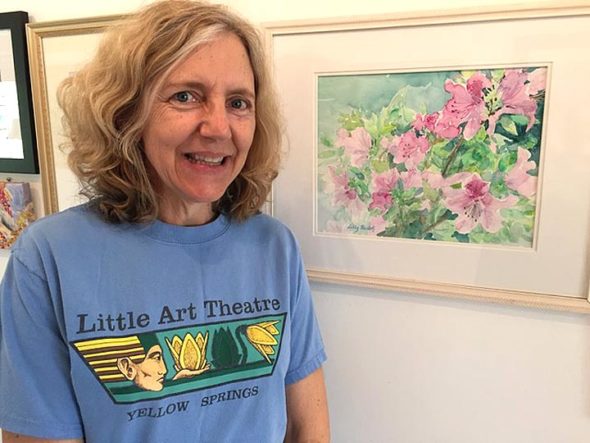 “I paint color and light in watercolors because it is a way to directly connect with the beauty surrounding us here in Ohio and in the world," says Libby Rudolf, whose paintings will be on display at the Winds from Tuesday, May 8, through the end of June. (Photo by Carla Steiger)

Inspired by nature, and the village

A feeling of unmitigated joy suffuses the work of painter Libby Rudolf. While she has painted a range of subjects, including portraits, street scenes and close-ups of flowers, she prefers to paint nature scenes and people in a natural setting.

Her style is impressionistic and she paints with assured and flowing brushstrokes. The pieces evoke the essence of each place she captures. Looking at one of her paintings of the stream in the Glen, the viewer can almost feel the moisture rising from the water and the sun-kissed warmth of the nearby rocks. Rudolf’s pieces, along with the work of her friend Diana Hoke, will be exhibited at the Winds from May 8 through June 30, her third show at the Winds restaurant. She has also exhibited her work with the Fairborn Art Association in Fairborn, the Yellow Springs Senior Center, and in group shows at the Springfield Museum of Art and the Columbus Museum of Art.

Rudolf’s pleasure in her art explorations is apparent in her description of how she works.

“I paint color and light in watercolors because it is a way to directly connect with the beauty surrounding us here in Ohio and in the world. …. If at all possible, I paint outside, in ‘plein air’ because it is by far the best way to achieve immediacy and luminosity with watercolors.”

She finds inspiration walking daily in the Glen with her dog, Lucky, a young border collie and she takes an abundance of pictures there that serve as the basis for many of her paintings.

She met her co-exhibitor Diana Hoke at an Enid Willard painting workshop at the Springfield Museum of Art. Hoke and her husband live in Saint Paris, a rural area close to Troy. Until retirement, she worked as a pediatric physical therapist in hospitals and clinics. Hoke began painting seriously when her son left for college and she appropriated his room for a studio. She is happy to talk about her work.

“I enjoy painting outside from nature, from live models and from my own photos. I choose everyday subjects that are meaningful to me, and have photos from traveling to the UK, Colorado and Europe,” she stated.

“Watercolor is my favorite medium, I love the transparency and like to experiment with different techniques and a variety of papers and colors,” she said.

While Hoke dove into art when her son was college age, Rudolf found the period when her three children, Lilli, 22, Melanie 25, and Eric, 27 were tiny, the beginning of her long and productive career as an artist. Somehow she managed to carve out moments to work at the kitchen table amid the clutter of toys and children’s belongings in their tiny 950-square-foot house on Grinnell Road.

She and husband, Dan, a computer hardware engineer, now live in a spacious house in the same location.

Rudolf’s first art adventures began on her grandmother Lillian’s porch in Jamestown, New York, when as a small child, they listened to piano music as they worked. Her style has also been influenced by other artists, especially Impressionists Mary Cassatt and Berthe Morrisot, Fauve painter Henri Matisse and American artist Andrew Wyeth. Lately, she is particularly enthusiastic about the new freedom she has found in Chinese brush painting, which was introduced to her by Lain Quan Zhen in a recent workshop and is now working on a large, 35” by 55”, piece using this style. She was also inspired by a Fred Graff “en plein” air workshop she took in Clifton in 2015.

“Half of the fun of these workshops is being with the featured artist, but I also love being with fellow students in the outdoors. Art can be a lonely business,” she said.

Although the bulk of Rudolf’s work is framed and matted, work has appeared in books and a banner made for the Yellow Springs Banner Festival. She illustrated “The Family Tree of the Rainbow,” by local author Raymond Ruka, along with books by Bill Felker and Pat Stempfly.

In addition to a prodigious production of work, Rudolf spends a considerable amount of time being an active member of the art community in town. She is an avid fan and member of both the Yellow Springs Arts Council as well as the Village Artisans, where she feels continually inspired to do new work and encourage others. Artist Toni Laricchiuta states, “Rudolf is a very inclusive painter. She enjoys making art opportunities for others to create and show artworks together.”

She is also connected to other village artists through the Monday Morning Yellow Springs Artists group, which meets to produce and share art. Her enthusiasm for doing art in the village has only grown over the course of her 30 years in town.

“I think Yellow Springs is an amazing place to be. We support each other, and the community supports us,” she said.