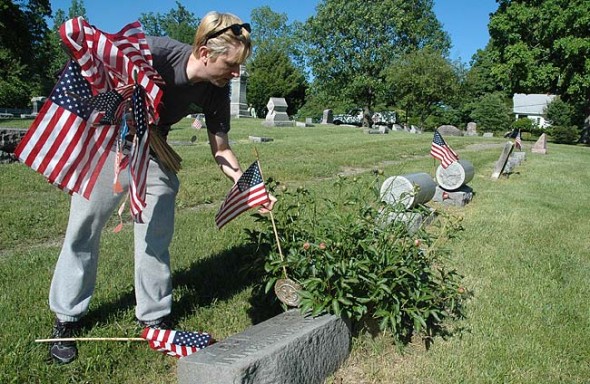 Members of the YS Odd Fellows will lead community members in placing flags on the graves of veterans and hold a Memorial Day ceremony and history talk about the cemetery's Civil War cannon this weekend. (Photo by Diane Chiddister)

On Friday, May 25, 5–7 p.m., the community is invited to assist the YS Odd Fellows Lodge in placing U.S. flags on the gravestones of military veterans buried in Glen Forest Cemetery. Those attending are asked to meet at the cannon on cemetery grounds. 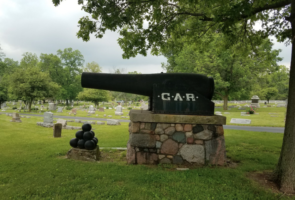 On Sunday, May 27, beginning at noon, the Odd Fellows will meet at the same location to raise the flag and perform a five-minute Odd Fellows ceremony in memory of the deceased. This ceremony will be followed by a re-dedication of the 1866 Civil War cannon, which was originally placed in the cemetery in 1908, and has now been refurbished.

The abbreviation on the cannon, G.A.R., stands for “Grand Army of the Republic,” a fraternal organization of Union Civil War veterans. Memorial Day, or Decoration Day, as it was originally known, was advocated in 1868 by General John A. Logan of the Grand Army of the Republic, and the practice of decorating the gravestones of fallen veterans was widely adopted in the years that followed.

Mayor Pam Conine and local historian David Neuhardt will speak at the May 27 event, providing more insight into the history of Memorial Day and the history of the cannon itself.