In the battleground state of Ohio, if about half of all votes are cast for Democrat candidates and half for Republicans, then why are three-quarters of its congressional representatives Republican?

Gerrymandering is a process of grouping voters to create districts that heavily favor one party over another, making races less competitive and virtually guaranteeing a district for a certain party.

But a measure on the ballot in the May 8 primary could change the way that U.S. Congress districts are redrawn in Ohio. Proponents say the proposed constitutional amendment, Issue 1, is a marked improvement over the current redistricting process, which is now done by the state legislature and requires only a simple majority. Opponents say that the initiative doesn’t go far enough to make redistricting fair and non-partisan. 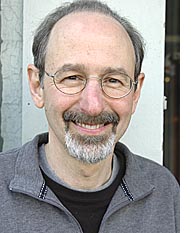 Local public interest lawyer Ellis Jacobs helped draft the language for a citizen initiative to reform the congressional redistricting process in Ohio. He is now a backer of Issue 1, a bipartisan compromise for redistricting reform that will appear on the ballot in the May 8 primary election. (Photo by Diane Chiddister)

Ellis Jacobs, a local public interest lawyer, sees both sides of the argument, but believes that Issue 1 would significantly improve the electoral process.

“It will be significantly better than what we have,” Jacobs said. “It won’t be perfect by any stretch, but it’s what we have to work with.”

Issue 1 was crafted in the state legislature as a bipartisan compromise after a citizen-led initiative to put a redistricting measure on the ballot gathered 200,000 signatures and thus “forced their hand,” according to Jacobs, who helped draft the language of the citizen proposal.

What the non-partisan citizen group crafted was the “Cadillac of redistricting,” Jacobs said, while Issue 1 can be compared to a Chevy. Still, after two failed citizen-led ballot initiatives for congressional redistricting in 2005 and 2012, and with the next round of redistricting scheduled to begin in 2021, a compromise measure is better than none at all, he added.

In the past, redistricting reform has faced well-funded opposition that used the complexity of the process to “poke one little hole” in it, Jacobs said.

“It’s a hard sell if you don’t have bipartisan support,” Jacobs said of redistricting reform. “That’s why the thing that’s on the ballot is not the greatest thing in the world, but I think we can pass it.”

The citizen group that had been petitioning, Fair Districts=Fair Elections Coalition, which includes the Ohio League of Women’s Voters, Common Cause Ohio, the Ohio Educational Association and 34 other state NGOs, has officially backed Issue 1. In essence, Issue 1 incorporates fairness objectives into the redistricting process, namely bipartisan support, enhanced transparency and public involvement, according to Jacobs.

But opponents of Issue 1 believe Republican lawmakers put the measure on the ballot to keep the more robust citizen proposal from voters and doesn’t make the process any less partisan. In an opinion piece this week in the Cincinnati Enquirer, Cincinnati attorney Paul De Marco wrote that Issue 1 continues to allow politicians to pick their voters rather than the other way around, and would not achieve real redistricting reform.

“Real redistricting reform means that Ohio, a state where congressional votes traditionally hover around 50 percent for each party, would also have an evenly split congressional delegation,” De Marco wrote. “In today’s hyper-partisan environment, this would be achievable only if a truly independent citizen’s commission is allowed to draw our congressional districts.”

Stephen Wolf, a writer for the progressive website the Daily Kos, recently criticized Issue 1 as a reform “intended to block more vigorous measures to end gerrymandering and create fairer maps.” The bipartisan process still doesn’t allow for competitive districts as political players will each try to protect their districts, he wrote in a February essay.

“Simply letting both parties protect their own seats may yield a fairer partisan balance than one-party control, but it deprives voters of the chance to vote in a competitive election, meaning outcomes are often still foreordained,” Wolf wrote.

Issue 1 lays out three possible avenues for redistricting. After new U.S. Census figures are released, the state legislature will first attempt to redraw the districts. But instead of a a simple majority of the legislature as before, they will need at least 60 percent of the support of both parties for their proposal to pass, according to Jacobs. In addition, there are fairness objectives including a maximum number of times a county can be split among congressional districts, possibly leading to more compact districts.

If the legislature cannot come to this bipartisan agreement, the task of redistricting then goes to the seven-member Ohio Redistricting Commission. That commission was created after an approved 2015 ballot measure to change how state general assembly districts are redrawn and includes the governor, state auditor, Secretary of State, an appointee of the speaker of the house, an appointee of the senate majority leader and two appointees of the minority party. Both minority party appointees must agree to the redistricting proposal the group crafts.

If the redistricting commission fails to agree, then redistricting reverts back to the state legislature, but this time only a simple majority is required to pass a proposal and the map is only valid for four years.

The federal government only requires that congressional districts have nearly equal populations and that redistricting does not discriminate based upon race or ethnicity.

Historically, gerrymandering has been practiced in Ohio by both Democrats and Republicans. But the computer technology now available to split voters among party lines has caused the long-standing process of gerrymandering to be done with “much more precision than in the past,” according to Jacobs.

Since Ohio Republicans had control of the governor’s office and both legislative bodies during the last round of redistricting in 2011, they were able to limit the number of Democratic representatives in the U.S. Congress over the last six years to four out of 16 districts, even though, in 2012 for instance, 51 of votes cast in congressional elections went to Democrats. That process, led by Rep. John Boehner, was also criticized for being conducted in secret in at a Columbus hotel with no public input and no public discussion of the criteria used to create the maps, according to the League of Women Voters.

Ohio may have some of the most gerrymandered districts in the country, with the current district map looking like a “shattered mirror,” according to the League of Women Voters. Techniques include “packing” and “cracking.” By either packing minority voters into a few districts or diluting them into majority-heavy districts, the minority party receives far fewer representatives proportionally.

Additional “tools in the gerrymandering toolbox,” according to De Marco, are “drawing districts that are not compact, and unnecessarily splitting counties, cities, townships, villages and other communities of interest for the sake of incumbent protection.” The League of Women Voters point to several egregious examples of a gerrymandering: Ohio district 9, the “snake on the lake” that stretches from Toledo to Cleveland and is at one point only connected by a bridge across the water, and Summit County, which is split into four different congressional districts, which it called “anti-mathematical.”

After redistricting in 2011, Yellow Springs was added to the relocated 10th congressional district, which includes Greene, Montgomery and Preble counties and is represented by Rep. Mike Turner, R–Dayton. Yellow Springs’ district is actually the most competitive one in the state, according to the Cook Partisan Voting Index. The district only leans about four points towards Republicans, while the average Republican-leaning district in Ohio favors them by 10 points and, in some districts, the Republican advantage is as high as 17 points. Democratic-leaning districts average an 18 point advantage, and one district, the 11th district encompassing Cleveland and Akron, has a 32 point tilt towards Democrats.

Nationally, gerrymandering led to the lowest number of congressional swing seats ever in the 2016, just 72, according to the Cook Political Report, with 241 seats leaning Republican and 185 seats leaning Democrat, even though more than half of U.S. voters chose a Democrat in the presidential race that year.

As of August 2017, congressional redistricting is done by state legislatures in 37 states, while independent commissions operate in four states, two use political commissions and seven states only contain one congressional district and thus don’t require redistricting, according to the website of Loyola Law School Professor Justin Levitt.

Gerrymandering is fundamentally anti-democratic, Jacobs explained, because it “determines the outcome of most, if not all elections before you even have voting.” The practice of gerrymandering has another unfortunate consequence — extremism.

“[Gerrymandering] tends to drive both parties to the extreme because the party doesn’t have any competition from the other party — the only competition is between themselves,” Jacobs explained.

Ohio lost two seats in Congress after the 2010 Census, and Jacobs said experts believe Ohio might lose another one to two seats after the 2020 Census due to the state’s slower population growth relative to other states. That’s what makes Issue 1 so important, Jacobs said. He pointed to how effective the 2011 round of redistricting was to Republicans in Ohio — every election since has gone to the party it was intended to.

“It was designed this way and it has been effective,” Jacobs said.

Advocates of fair elections — Jacobs among them — are hoping for a better redistricting process in 2021. Jacobs believes Issue 1 is the most likely way to achieve it.