Discipline hearing for Meister set for next week 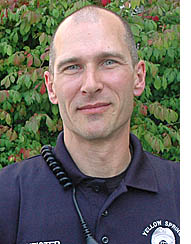 Yellow Springs Police Department Corporal Dave Meister is set for a pre-disciplinary hearing next Friday, June 29, at John Bryan Center, according to Meister’s attorney, David Duwell of Dayton, in an interview today.

Meister is still on the job and performing his duties, according to Police Chief Brian Carlson in a June 21 interview.

According to a May 24 memo from Carlson to Meister, “it was concluded that both vehicle drivers were repeat offenders, under suspension and possibly intoxicated.” The memo further states that the discretion used by Corporal Meister during those stops deviated from police policy for possible Operating a Vehicle While Intoxicated, or OVI, violations and “could have resulted in harm to the general public and or the offender.”

According to the memo, Carlson is recommending that Meister be demoted from corporal to officer status, be given a three-day suspension without pay, have a performance improvement plan with a last-chance agreement, and go through a 12-month probationary period.

“We do not accept the recommendations,” Attorney Duwell said.

On Thursday, Duwell said he could not comment on the specifics of the case as it is ongoing. However, he stated that Meister’s position is that the discipline standards being applied to him have not been applied consistently in the department. Duwell and Village Solicitor Chris Conard have been in discussions regarding the case, and the pre-disciplinary hearing is taking place because they did not reach agreement on the recommended disciplinary actions. At the hearing, which is presided over by hearing officer chosen by the Village, Meister will have an opportunity to respond verbally or in writing to the charges.

Should Meister disagree with the decision issued by the hearing officer, he will have the choice whether to appeal the decision in court, according to Duwell.

Duwell held out hope that resolution could be reached.

“I’m still hopeful that everything can be worked out in the best interest of both David and of the community,” he said.

A fulltime officer since 2010, Meister is a popular officer in the community, and was one of three finalists a year ago for the police chief job. In January 2018, he was one of two officers promoted to the new position of corporal, which involves supervisory responsibilities. He and his wife, Zo Van Eaton Meister, and four children, live in Yellow Springs. Supporters are planning a rally in his behalf at noon on Saturday, June 23, at the Bryan Center.

6 Responses to “Discipline hearing for Meister set for next week”