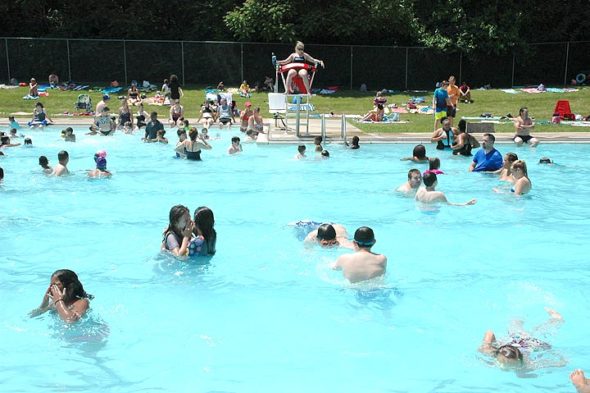 Several hundred villagers and out-of-towners converged on the Gaunt Park pool on Monday, a sweltering hot Memorial Day. The pool was recently upgraded with $80,000 worth of repairs, according to Village Public Works Director Johnnie Burns. The Yellow Springs pool is now the only operating municipal swimming pool in Greene County. (Photo by Diane Chiddister)

The Gaunt Park Pool opened its gates last Saturday after being extensively repaired this month. The repairs were funded by part of the $150,000 budget appropriated to the Parks department Capital Improvement Fund by Village Council.

According to Johnnie Burns, the director of the public works department, the large block of funding for the project is a part of the Village Council’s commitment to giving kids a place to spend their summer.

“What we’ve done this year will last for a long time because we will be able to maintain it and keep things running,” Burns said last week, adding that he thought the pool staff would have a great summer working in the newly repaired space.

Some of the major repairs included repainting, rewiring and relighting the entire facility; fixing a leak in the kiddie pool; and resetting 42 gutter stones that had become loose or detached from the edge of the pool. Even more was done in less noticeable ways to make the pool safer, more accessible and easier to reopen year to year.

Uneven paving stones were ground down to eliminate trip hazards, new gutters and spouts were installed, the water damaged flat roof of the pump shed was replaced with a slanted one, fans were added to all chemical sheds, a diving board was replaced and a new handicap accessible seat was added. The public works department has reportedly spent about $80,000 so far, or just over half of the total budget for the project, according to Burns.

The repairs have been much more extensive than most years because some maintenance has been deferred long-term, according to Council Member Lisa Kreeger in a recent Council meeting.

Two local contractors were hired to help village workers make the repairs. Nick Burkland, who was responsible for painting, and Spencer Building Group, the general contractor, joined the Public Works Department team on the project and have had success so far, according to Burns.

“It all needed to be done by Saturday, so it was all hands on deck,” Burns said, adding, “Everything you see here right now is because of great team work and contractors.”

The Public Works Department is a new department that encompasses the former parks, streets, and electric teams. It currently employs 16 people, including Burns, four of whom are seasonal workers.

The Gaunt Park pool is now the only public swimming pool in Greene County, making the decision to keep it open this year even more important for those trying to keep cool this summer.

However, there are costs associated with keeping the pool open. Over the last eight years, the Gaunt Park Pool has lost an average of $56,233.43 per year, according to village documents, and will almost certainly be more this year after the new repairs.

Similar deficits at the county-owned Fairborn and Xenia pools led both to close in 2010 when the county decided it could not afford to subsidize the $100,000 in combined annual losses at the two facilities, according to Howard Poston, county administrator.

“Council feels that the pool is a valuable amenity,” said Patti Bates, the Village Manager, adding, “it is the only pool left [in Greene County] so they have decided to keep it.”

*Morgan Beard is a journalism student at Ohio University and a summer intern for the YS News.