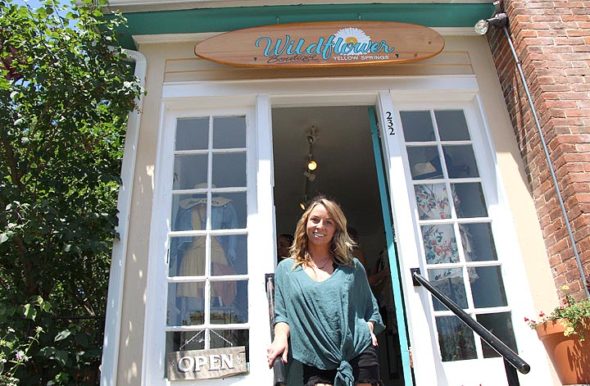 Danyel Mershon, who opened Wildflower Boutique three years ago this weekend, has been plagued by shoplifters at the store. She and other local shop owners are joining together to alert each other when shoplifting occurs. (Photo by Morgan Beard)

On Wildflower Boutique’s opening day  three years ago, owner Danyel Mershon placed an expensive necklace on display. At the end of the June day — which happened to be Street Fair — Mershon realized the necklace was gone.

The problem continued. Last year Mershon, who sells women’s clothing, counted 18 thefts of bralettes, an undergarment especially popular with young women that had been a dependable source of revenue. But due to the frequent shoplifting, Mershon decided to discontinue carrying the item.

She has instituted other precautionary practices as well, including installing cameras throughout the store, and limiting the number of customers allowed in a fitting room to one.

“It’s been unbelieveable,” Mershon said in a recent interview. “I knew there would be theft, but didn’t expect it so often, or to involve local people.”

Those who steal don’t seem to realize the financial impact of their action on an independent store owner, said Mershon, whose boutique is the culmination of her lifelong dream to open a specialty clothing shop.

Kismet, a clothing store across Xenia Avenue from Wildflower, has also struggled with shoplifting, according to employee Kayla Graham.

“It can be anyone, any age,” Graham said.

The store has an electronic alarm system that goes off when unsold items go out the door, a situation that sparks uncomfortable conversations between shop employees and those who are taking unpurchased items.

“I was just talking to my manager about how awkward it is,” she said.

But the conversations are taking place and will likely increase, because it’s summer,  high season for shoplifters.

“It’s hard, because you want to be trusting,” Graham said. “But shoplifting does happen, especially in summer when it’s crowded.”

Jamie Sharp opened the Yellow Springs Toy Company in the former location of Mr. Fub’s Party only three months ago. Since she has a digital app that keeps track of inventory electronically, it didn’t take long to realize that shoplifters were also targeting her store.

“I noticed when I was re-ordering things  I should have had a certain number of, I did not have that number,” Sharp said.

Like Mershon, Sharp is a first-time store owner, and the Yellow Springs Toy Company is the result of a considerable amount of hard work, risk and expense. Due to shoplifting, she has had to install a security system that cost $400 upfront, along with a monthly fee.

Both out-of-towners and locals, especially local young people, shoplift, Sharp has discovered. She learned of one incident when a local grandmother, a friend of Sharp’s, came in to report that her granddaughter had been with a local girl who shoplifted from the store. Later, Sharp heard the girl had been shoplifting from other downtown shops as well.

“I explained to her that she’s stealing from me,” Sharp said. “They don’t think of the victim. I’ve had to spend money and energy on buying a security system. As a new store owner, it’s disheartening.”

The best strategy for tamping down shoplifting is hiring more employees to monitor the store, according to Sharp. But like most local shop owners, she can’t afford to hire in greater numbers.

“Most of us just work in our shops ourselves, seven days a week,” she said.

Alarmed about her growing awareness of shoplifting in her store, Sharp communicated her distress on her store’s Facebook page. Many other local business people responded with similar concerns and experiences.

Alerted to the issue, the Yellow Springs Chamber of Commerce recently held a meeting for downtown store owners with a focus on shoplifting concerns. Fourteen business owners attended.

“Everyone there expressed concern,” Chamber of Commerce Director Karen Wintrow said recently. “It’s probably a bigger issue than we thought.”

It’s not clear if shoplifting has increased locally in recent years, Wintrow said, although there has been an increase in tourists. For years, Yellow Springs has had the reputation as an easy place to steal, she believes, given its reputation as a laid-back town full of people who question authority.

“People seem to think they can come here and everyone’s sitting around smoking pot,” she said. “They feel in Yellow Springs there’s less sense of order, less adherence to the norms of society.”

But that assessment’s not accurate. At the Chamber-sponsored meeting, Police Chief Brian Carlson offered tips for shop owners to help prevent the crime. And security systems, while expensive and largely absent in local stores, are always a good idea, he said.

Local police intend to increase their presence downtown, in an effort to discourage stealing, according to Carlson.

“We’re stepping up our foot patrols and our presence downtown,” he said recently. “We’ll walk around in the shops.”

Carlson is especially troubled by the number of local young people who appear to be shoplifting. He intends to go to the schools next year and talk to young people about the effects of the crime.

“Theft has a huge impact on local business,” he said. “We want our shops to thrive.”

Carlson also encourages local parents to bring up the topic of shoplifting.

“We want to see dialogue in the home,” he said.

“We need to help people understand what this means,” she said. “These are small businesses in a small town. These are your neighbors.”

While anecdotal evidence suggests that shoplifting is on the rise, police data tells a different story. In 2017, there were 39 reports of theft in town, with five related to shoplifting. And in 2018 so far, out of 15 theft reports, one is linked to shoplifting.

Yet those who shoplift most often aren’t caught. According to data from the National Association for Shoplifting Prevention, or NASP, shoplifters are caught only about once every 48 times that they steal. About half of those caught were turned over to the police.

One local store owner takes a different approach to the shoplifting challenge. While Molly Lunde, who owns Asanda Imports with her husband, Lee Kibblewhite, has no doubt that merchandise has been shoplifted from her store, she has chosen not to focus on it. The shop carries hundreds of inexpensive items, including jewelry, scarves, clothing and toys from Thailand, Bali and Nepal.

The store does take precautions, displaying its more expensive items near the front counter under the watchful eye of an employee, Lunde said. Also, the store has an open configuration, so that whoever is working at the counter has a clear eye on most shoppers.

But Lunde has found that the more she focuses on shoplifting, the less she enjoys being in her store. And she wants her time in the store, with customers from out of town who tell her how much they love Yellow Springs, to feel uplifting.

“When I was overly concerned about shoplifting, it shifted my experience of being here,” she said.

Still, Lunde acknowledges that her situation is different from most local shops. Because she and her husband do their own buying trips twice a year, they don’t have to pay importers, so have lower mark-ups on their merchandise.

But losing items to shoplifting has a different financial effect on Jamie Sharp. Shoplifting has emerged as a distracting and troubling issue that has undermined her enthusiasm for her new store.

At the door of the Yellow Springs Toy Company, Sharp has posted a sign stating that no backpacks are allowed in the store.

“I hate having that message,” she said. “But I feel I was forced into it.”

Morgan Beard, a News intern, contributed to this article.