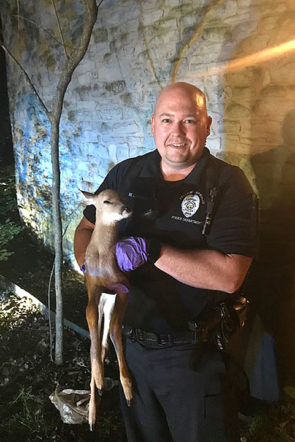 Officer Mark Charles on Tuesday rescued a baby deer found near the Glen Helen building, injured and without a mother nearby. With the help of Dr. Suzanne Ellis, the little deer is expected to survive.

Officer Charles left the scene briefly to see if the animal’s mother would return. However, when the doe was still there the next morning, unable to move and with its mother nowhere to be found, Officer Charles called local veterinarian, Dr. Suzanne Ellis.

Dr. Ellis collected the doe on Wednesday morning. The deer is expected to recover from its injuries, thanks to the work of Dr. Ellis and Officer Charles, according to Chief Carlson.