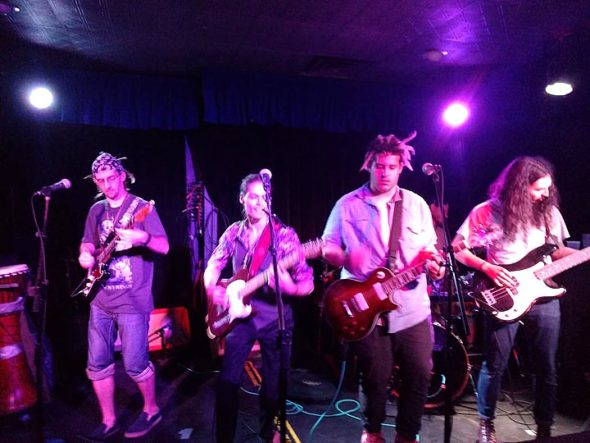 Love and a feel-good jam band

On Saturday, June 9, a local band and its cohort gathered in a circle, each with one arm around another and a cup in each one of their other hands at Peach’s Grill, toasting the show before it began. The band is Gin-Soaked Angels, and it was celebrating the release of its very first CD. The music of the band, which first formed in 2012, sounds so seasoned, tight, and well-rehearsed that its first release seems overdue. GSA is what many might call a feel-good jam band.

“We’re having one big tuning extravaganza,” said the highly animated and enthusiastic Tony Powers, one of two lead singers and the lead guitar player in the band. Someone from the audience suggested that his phrase should be the title of a new song.

“We just had a sun-soaked set in the heat which throws our tuning off,” explained Powers. “But excuses are like cabooses — you should never lead with one.” The group had just played an afternoon set for the Yellow Springs Street Fair.

The first number was encouraging and disarming, led by the more mellow and laid-back lead singer and rhythm guitar player Ryan Stinson, who has a voice not unlike that of Billy Corgan, the lead singer of Smashing Pumpkins.

“My water tastes strangely like gin,” Stinson said to the crowd.

As a jam band, they have a sound that is akin to the Grateful Dead with extensive guitar solos and long musical interludes throughout. Their songs range anywhere from a funky groove, a strong, tight punch, swirling sonic guitars, acoustic folk-rockiness, psychedelia, and from happy-dancy to trippy-slowcore. This fusion has all the makings of a ’90s alternative revival band, which itself was a throwback to ’60s and ’70s classic rock and pop sounds, and one can hear all these influences throughout.

“They are distinct in their variance of style, and that speeds them up a lot,” remarked Eli Bugler, a member of the audience that night.

The fourth song was a  funked-up instrumental in a minor key in which listeners were transported to “the zone,” so to speak, and everyone “got down,” especially after Powers said, “I don’t see a lot of movement here!” which cued the audience to action.

“Now how ya doin’ Peach’s?” Powers asked after that long groove. By their eighth song, Peach’s got more crowded and active.

One could feel the love and sentiment pouring out of their music as they performed John Prine’s “Angel from Montgomery,” which they dedicated to their late band member Ben Rorrer, who played bass, whose recent death was ruled a suicide. All his parts were recorded for the album before he passed, and it was very important to the band that his presence be felt that evening. An audience member was waving his phone with a picture of Ben on the screen, which evoked heartfelt emotion in the band.

Powers has a smooth, clear, on-cue singing voice that is similar to that of Jason Mraz. He and Stinson, with their contrasting and complementary personalities, are like the yin to the yang, as the vocal duo trade off singing lead.

“For those of you who are new to the band, a little history,” Stinson said at the beginning of the second set. “This is how it all began.”

They then proceeded with a more folky acoustic set with just Powers and Stinson. When the two first met and started playing together, they were “just two acoustics around a campfire,” they said.

They described the assembly of their band as simply falling into place with good chemistry from the very beginning. Powers brought in originals that he had composed himself, and Stinson contributed his favorite cover-tunes that were conducive to their style, and it evolved from there. They expressed that the way it all came together seemed to be through some cosmic force that is beyond their understanding or explanation.

“Inclusion is a key thing in our music — bringing people into family and community with brotherhood, respect, love and responsibility to one another as fellow travelers,” Powers said. “This type of family unity cradled, molded, and shaped us with connectivity and love at the heart of it.”

As lots of people were hugging each other throughout the show, this love was apparent. There has been a “healing feeling” reported by fans at shows, according to Powers, and there are others, including members of the band, who have experienced personal healing through the music.

It was the Thursday night open mic shows at the Spirited Goat Coffee House that brought an influx of musicians from the community out of which the Gin-Soaked Angels flowed, formed, and flourished.

One evening at The Goat, six years ago, Stinson, then hosting the open mics, was playing Pink Floyd on stage, but Powers was playing along with him in the audience. When Stinson discovered this, he said, “Get up here!” Afterward, they spoke outside and decided to start playing together.

Micah Mapes, now the group’s drummer, had asked if he could set up his drum kit to play along with the open mic jams. For the longest time, Mapes felt as if he had “one foot in and one foot out” of the band, but eventually he felt fully a part of it.

“There was a time when I finally participated fully and gave it my all after the first year or so. It was due to my involvement with another band at the same time,” Mapes explained. “So after I decided that Gin-Soaked was my first priority, I guess you could say I was all in at that point.”

GSA has had a long string of bassists, and most of them have been close friends or relatives, with some kind of affiliation with the group, either with the open mics, street music, or bonfire gatherings. Ben Rorrer, who used to play in the folk group “The Great Wide Open,” was the fourth. When he was hanging out after open mic one evening, they asked him, “What you got in the case?” (referring to his bass). “Wanna play?” and he did.

“Many friendships I have developed have come out of just a simple meeting,” Rorrer once wrote in his journal, which was definitely true in this case. They said he helped their jamming improve, and added something edgier and less folky.

The band members faced a real turning point in their loss and grief over Rorrer. They feel him in everything they do, they said, as he is present to them spiritually and emotionally in the music and otherwise. His parents have been a presence throughout the band’s grieving process and performances, and have been very supportive.

David Rivera, their present bassist, naturally flowed in to play his parts. He was with the band all along on other projects, and was a good friend of Rorrer and the rest, so he filled in with ease.

Jacob Riley is the band baby, another rhythm guitarist whom they also met around the coffee house scene. He came to Yellow Springs to get away from his former life. “I should go grab a guitar,” he thought to himself. The other band members said he has a great ear for music.

Ricky Ware is the percussionist who is currently away but will be back in September. He would come to every after-party, bonfire, and show, playing along in the audience at first. He fell into their hearts and music, so they brought him aboard.

Gin-Soaked Angels can be found online at Spotify, iTunes, Amazon, Google, and Facebook.

Tracy Perkins-Schmittler is a local musician and freelance writer for the News.