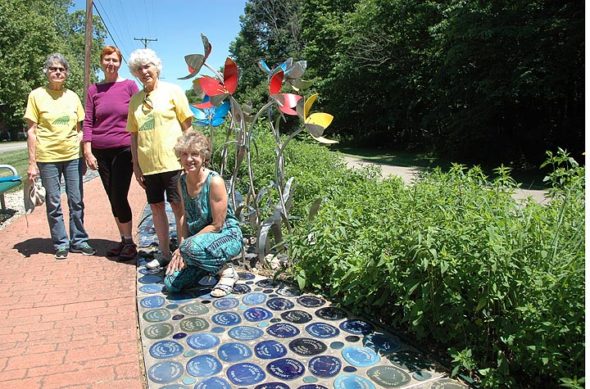 The 20th anniversary of the Women’s Park of Yellow Springs will be celebrated on Sunday, July 1, from 1 to 3 p.m. at the park on the Little Miami Trail bike path. Shown above are some of the park’s organizers and gardeners, including Evelyn LaMers, in front; behind, from left, Helen Eier, Deb Henderson and Macy Reynolds. (Photo by Diane Chiddister)

Twenty years ago, villager and women’s rights activist Gene Trolander gathered together like-minded friends to bring to life a vision she held dear: a park to celebrate the lives of Yellow Springs women.

“Over and over Gene said, ‘Women are the people who take care of the world. They need to be honored,” said Deb Henderson, one of the original creators of the Women’s Park of Yellow Springs.

Not long after the park was launched, Trolander died. But the park lives on, and is thriving.

“Twenty years later, it looks great,” said Macy Reynolds, who leads the volunteers who care for the park’s native wildflowers.

July is the height of the park’s beauty, according to organizers, the month when its cornflowers and black-eyed Susans burst into bloom. The park contains a host of colorful plantings, including coreopsis, blue false indigo and blue mistflower, chosen both for their beauty and their role as pollinators.

“When the flowers are in bloom, the park is the most gorgeous place in town,” said villager Evelyn LaMers.

And nestled among the flowers are three areas that hold the heart of the Women’s Park — more than 800 ceramic hand-crafted tiles that honor specific Yellow Springs women.

Each tile honors a specific woman, with a few words of description chosen by the person who purchased the tile.

Villagers will soon have the opportunity to celebrate the Women’s Park. On Sunday, July 1, from 1 to 3 p.m., all are invited to a 20th anniversary celebration of the Women’s Park. The event includes a wildflower walk around the park, along with pollinator walks at 1:30 and 2:15 p.m., led by Reynolds, a master gardener.

Last week, several of the organizers and current gardeners met in the park to talk about the park’s creation. They love the park and are proud of it, the women said, emphasizing that it all began with Trolander.

A fierce feminist, Trolander was an early childhood educator whose respect for women was linked to her sense of their importance in caring for children and the home, according to Henderson. Following a visit to Florida, where Trolander saw a park dedicated to women, she returned to the village inspired to create such a park here.

Known for her energy, forcefulness and charisma, Trolander organized friends and fellow feminists to help her. Her friends weren’t surprised that when Trolander asked Village Council to give the group land for the park, Council agreed. Council then donated a long, narrow strip of land next to the bike path.  Support was also received from Women, Inc., a local feminist group at the time, and the Yellow Springs Community Foundation.

For eight months, the original organizers — along with Trolander and Henderson, the group included Connie Crockett, Phyllis Jackson and Emily Fine — met weekly at Henderson’s house to scheme and plan. An artist, Henderson designed the serpentine path that winds through the park.

“A serpentine path is so much more interesting than a straight path,” she said.

Henderson also insisted that the park have color. She chose benches like the ones she’d seen in an Akron park, with bright primary colors. And when the group decided on a large sculpture of flowers to anchor the park, Henderson painted the sculpture in bright colors, a practice she repeats every two years.

The original group brought in local potter Evelyn LaMers to create tiles. While the Florida park honored women, the local park organizers believe the Yellow Springs park is the only one that recognizes each woman with her own tile.

“I think this plan to recognize individual women is unique,” said Helen Eier, who helps maintain the park’s flowers.

Not long before the Women’s Park launch, the Yellow Springs Train Station had sold commemorative bricks to raise money and recognize donors. But bricks weren’t quite the right image for the Women’s Park, organizers agreed, and Trolander especially wanted tiles to reflect feminine qualities.

“Gene wanted the tiles shaped like eggs,” LaMers said. “She was adamant about that. We did it, but it was kind of hard to fit them together.”

But what color should the tiles be? First LaMers planned to use earth tones to blend with the natural surroundings. But shortly after she visited Santa Barbara, Calif., where ceramic tiles decorate the downtown. Earth tones blended in too much and didn’t show up against the sky and grass, LaMers noticed, while blue was vibrant. Ultimately, she made the tiles in three different shades of blue.

Next came the tile insignias. Villagers were offered the opportunity to purchase a tile in honor of a specific woman, at the price of $50. While the train station tiles had been priced at $100, the women felt strongly that they needed to make participation in this project less costly.

“That strategy was 100 percent successful,” LaMers said. “We reached every demographic in town.”

Organizers didn’t know whether or how villagers would respond to the project. But they found out when the deadline for tiles came near.

“The orders started coming in,” LaMers said. “Gene went to the post office box and it was jammed with orders. There were almost 500 orders in the first batch.”

Some of the tiles are dedicated to anonymous women, or famous ones, such as Eleanor Roosevelt. But most, as organizers hoped, honor the women of Yellow Springs.

Organizers were buoyed by the response of the community.

“People got so enthused about it, they just kept ordering more,” she said.

In July 1998, the Women’s Park was ready to launch. The Yellow Springs News covered the event:

“Motherhood, friendship, love, dancing, laughter and music are among the themes embedded in the commemorative tiles installed in the new Women’s Park snuggled between Corry Street and the Little Miami Scenic Trail …

“At the dedication ceremonies Sunday, people of all ages meandered along the path past benches where storytellers, in costume, portrayed historical figures …

“Every few minutes someone was compelled to read aloud the name of someone they recognized, some touching sentiment, some illuminating phrase: “The old witch on High Street,” “prison camp survivor,” “loved music, loved to dance” …

“The official dedication with speeches honoring women and honoring the park, including one by Gene Trolander who spearheaded the project, was held a few yards away in the Antioch College Amphitheater.

“The sound of many hands clapping filled the air.”

While Trolander was able to see the park become a reality, she died the following March.

But the park lives on. Every two weeks for a few hours on Monday mornings, Macy Reynolds leads a group of volunteers in weeding the plants and otherwise taking care of them (more volunteers are always needed, Reynolds said). According to the others, Reynolds has brought to the park a wider variety of plantings and flowers, with a special focus on pollinators.

“The butterflies are lovely,” when the flowers are blooming, Henderson said.

Twenty years after the launch of the Yellow Springs Women’a Park, organizers are proud of their creation. Located on the Little Miami Trail Bike Path going south out of Yellow Springs, the park catches the eye of those passing by on foot or via bicycle.