Bachman takes over role as editor of News

A change of leadership is taking place at the Yellow Springs News this month.

Beginning next week, Megan Bachman will be the new editor of the local paper. Bachman is taking the place of Diane Chiddister, 68, the editor for the last 12 years.

Bachman, 36, has been connected to the paper since 2010, when she came on as a reporter. She stayed for five years, then left before the birth of her second child. She returned to the News in January 2018, after having reached an agreement with Chiddister and the other News owners that she would take on the editor job in July. 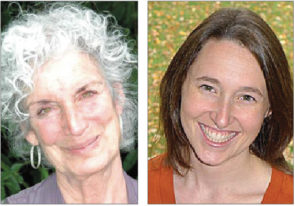 Diane Chiddister, left, is leaving her position as editor of the Yellow Springs News. The new editor will be Megan Bachman, right, a current News reporter. (News archive photos)

During Chiddister’s tenure, the Yellow Springs News has been consistently recognized for high quality writing and reporting. During the past 12 years, the News won nine Newspaper of the Year awards for weekly papers at the annual convention of the Ohio Newspaper (now Ohio News Media) Association in Columbus. The News won in 2009, then, beginning in 2011, has won the top honor the past eight years in a row. The Newspaper of the Year goes to the paper that wins the most individual awards, and the News consistently wins in the categories of in-depth reporting, news coverage, editorial writing, original columns, feature writing, photography and special editions, among other awards.

Before coming to the News, Bachman served as outreach director at Community Solutions for six years. While there she organized and served as master of ceremonies for six national conferences on energy and sustainability, co-wrote and co-produced the award-winning documentary film, “The Power of Community: How Cuba Survived Peak Oil,” spoke before nearly 100 groups around the country and in Europe on sustainability issues and wrote and published articles in a variety of magazines and online journals.

Before that, Bachman was a neighborhood organizer for Ohio Citizen Action, a research assistant for the American Civil Liberties Union of Ohio, and a constituent case worker for Congressman Dennis J. Kucinich.

While at the News, Bachman has been recognized by the Ohio Newspaper Association with awards in best feature writing, best sports writing, best original column writing, and best photo.

Originally from the Cleveland area, Bachman received a master’s of science in teaching (Earth Science) from Wright State University and a bachelor’s of arts in diplomacy and foreign affairs from Miami University. She studied abroad in Cuba and Luxembourg.

Bachman moved to Yellow Springs in 2004, right out of college. She and her husband, Joe Bachman, an administrator at Xenia High School, are the parents of Pearl and Luella.

Chiddister has been associated with the News since 1983, when, having recently moved to Yellow Springs, she responded to an ad in the paper for a reporter. Having just finished a Masters in Fine Arts, or MFA, from the University of Iowa Writer’s Workshop, she learned the journalism trade from former editor Don Wallis. Since then, Chiddister has worked at the paper off and on as a reporter and as a columnist, writing a regular column, “A Walk in the Village,” before taking on the editor job.

As well as working for the News, she has been an adjunct instructor of writing at several local colleges and universities, including Antioch University Midwest, Antioch College, University of Dayton and Clark State University.

Chiddister received a bachelors in political science from Indiana University in 1973, then worked as a social worker in northern Indiana before receiving a graduate degree in creative writing in Iowa and then moving to Ohio.

Following the editor transition, Chiddister will continue writing part-time at the News. Currently a co-owner of the News with Advertising Manager Robert Hasek and Designer Matt Minde, she will sell her ownership shares to Bachman immediately. She plans to stay in Yellow Springs and will pursue other writing projects. A certified Gestalt coach, she also plans to launch a coaching business.