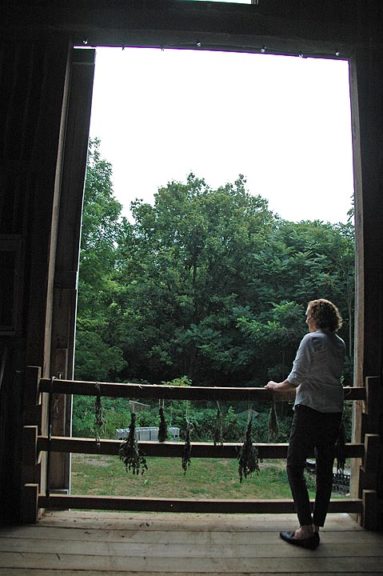 Community Solutions Executive Director Susan Jennings looked out at the Agraria farm from the renovated barn at the 128-acre property just west of the village. Community Solutions’ annual meeting will be at Agraria on Saturday, July 21, from 2 to 4 p.m. (Photo by Megan Bachman)

Grounding vision of resilience at Agraria

A gulp of barn swallows dove in between rows of buckwheat and bloody butcher corn on a recent 90-degree afternoon at Agraria. On an adjacent field, a heat mirage shimmered as young soybeans poked up through the dry soil.

To local horticulturist and aspiring  farmer Bob Moore, the Agraria center for regenerative agriculture is a place of opportunity and uncertainty.

On land he leases from Community Solutions, which owns the 128-acre farm on Dayton-Yellow Springs Road, Moore is experimenting with varieties of grain that could transform the local food economy — if they can thrive.

Gesturing toward the surrounding fields of conventionally-grown corn and soy, Moore observed the reality of agriculture today and posed the question he hopes to answer at Agraria.

Devin Schenk of the Nature Conservancy will speak on the group’s restoration plans for Agraria; Krista Magaw of the Tecumseh Land Trust will talk about the Jacoby Creek Partnership; Eric Lang will speak on biochar and show off his pyrolyzer; Susan Jennings will discuss the organization’s plans for the future, and there will be tours of the land and renovated buildings.

We don’t eat what’s grown here. All of the grain on all of this farmland is shipped away from us,” he said, adding that most of it goes to feed animals and — as ethanol — cars.

“But is there a way we could value-add grain and then get the local farmers to grow that grain?”

Toward that end, Moore is experimenting with ancient grains like emmer, a wheat that dates from ancient Rome, along with hull-less oats, upland rice and red corn on 38 acres of rolling farmland at Agraria.

Moore’s vision dovetails well with that of Community Solutions. On the property it purchased last year at auction, the 75-year-old local nonprofit wants to model regenerative agriculture as part of its mission to create resilient communities in the face of climate change.

“Community resilience is about relocalizing supply chains, and food is the most important piece of that,” said Community Solutions Executive Director Susan Jennings this week.

Even now Community Solutions is attracting area farmers and landowners looking to make the transition from conventional to regenerative farming on their properties, Jennings said. Moore is one who could help show the way.

Just 16 months after the land for Agraria was purchased, creating an “unexpected opportunity” for the organization, Jennings reflected on what has been learned and who made it possible.

“The core learning is that of deep collaboration,” she said. “And gratitude for the Yellow Springs residents, who see this as a community asset.”

To Jennings, Agraria has opened up collaboration opportunities in the areas of agriculture, education and research. But instead of competing with existing practitioners, Community Solutions looks to support them.

“The most important thing we can do is to support those who are already doing it — the farmers, researchers and educators,” Jennings said. “We don’t need to re-create what people are already doing.”

Besides Moore, four others are leasing land at Agraria this year in collaboration with the organization. Jason Ward of Urbana is growing organic corn and soy to feed organic livestock. Villagers Mandy Knaul and Theresa Nolan have plans for a therapy gardening program for LGBTQ youth with fruits, vegetables and flowers, starting this year with honeybees. And Dave Shal of Green Acres farms in Cincinnati is doing biodynamic soil amendment research.

Educational collaborations are also taking off. The Yellow Springs Children’s Montessori Cooperative has been running a summer program there for young children. Last school year third-graders from Mills Lawn studied soil fertility, and Yellow Springs teachers learned new advances in soil science for their continuing education. Relationships are in place for the upcoming school year with elementary schools in Xenia and Springfield, according to Jennings.

In fact, education has long been at the heart of Community Solutions’ work, Jennings noted. And Agraria is helping the group to fulfill that commitment, whether on the local, regional or national stage, she said.

“We are recognizing that our most important function is as an educational institution— that’s what Community Solutions has always been about,” Jennings said. “Agraria gives us the space to strengthen and deepen our educational opportunities.”

Running the gamut from K-12 education to college and adult education, Agraria is quickly becoming a hub for learning, Jennings said. Recent workshops in foraging and herbalism, seed saving and organic land assessment in partnership with the Ohio Ecological Food and Farming Association, along with an upcoming event on fermentation are a testament to that role. Next year the programs could multiply with the addition of a new educational building, which is now being designed thanks to a $50,000 grant from the Dayton Foundation.

Overall, Agraria has grounded the vision of Community Solutions, Jennings said, while working with the land has humbled the organization to the challenges of farming. Transition can be “messy,” in Jennings’ words, but Community Solution has time.

“We’re in it for the long game,” Jennings said.

Wiping sweat from his brow while weeding on a recent afternoon, Moore reflected on a season that has so far proved to be a hard lesson in farming’s realities.

“There’s a lot of idealism that gets stripped away in this heat,” Moore said. “The barriers are incredible.”

For instance, the acres of non-GMO soybeans that Moore is growing without the use of chemical pesticides or fungicides might not be worth what it cost to plant them after China’s recently-announced retaliatory tariffs on U.S. soybeans.

In addition, the land — which for a long time was in a typical corn and soy rotation — was “worked pretty hard,” in Moore’s words and its soil is heavily depleted.  Moore had to bring in two semi-truck loads of compost for a small trial plot of vegetables and grains.

And after last year’s cover crops went to seed, volunteer corn, millet, sorghum, sunflower and kale are scattered through some fields, fighting for space with the wheat that Moore planted.

Farming organically can be even more daunting, Moore explained, as the weapons to fight weeds are limited. In a battle of wits with weeds, Moore believes, the weeds have an advantage.

“How organic makes it is you have to trick the weeds,” he said, detailing ways to use cover crops and planting schedules to keep them at bay. “And the weeds have an edge on you.”

Moore also expressed gratitude to Community Solutions for the opportunity to try out new possibilities as he angles to find his niche in the local food economy. After growing up on a family farm on Clifton Road, Moore went on to get his degree in horticulture at Ohio State before going into the nursery and landscaping professions.

Though hesitant to adopt the title of farmer, Moore is hopeful that at least some of this year’s experiments prove fruitful. In addition to grains and soy, he’s growing heirloom butternut squash, blue pumpkins, cowpeas, calendula and more.

But since “grain is what these farmers do,” he said of area farming, Moore is setting his sights on finding a grain variety that not only can grow well in our region’s soil and climate, but has a market too. After all, vegetables only provide a small percent of calories in our diet.

This season Moore is trying to find the right crops for the right spots and getting a handle on the “rhythm” of farming. It’s the hardest work he has ever done, in part because he is also continuing his landscaping businesses and growing cut flowers on the side. It’s typical of farmers to have other sources of income, he said.

Come season’s end, Moore might not have much to show for his labor at Agraria. But for him it’s worth the effort and the sweat. He loves the planning and possibilities of farming. Above all, farming is an act of creation.

“It’s building something out of nothing,” he said.

Through her work, Jennings is also growing closer to the land. Regular meditation groups meeting at Agraria are learning to listen to the land and to partner with it in intentional ways.

“We are exploring what it means to be in partnership with the land, both physically and spiritually,” she said.

One Response to “Grounding vision of resilience at Agraria”