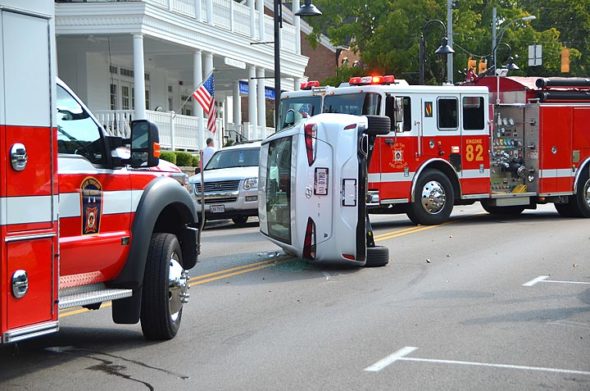 A car flipped and landed on its side in front of Mills Park Hotel in downtown Yellow Springs after hitting a parked vehicle Wednesday afternoon, Sept. 19.

Car flips on side, driver unhurt in downtown Yellow Springs

A car that flipped and landed on the driver’s side in front of Mills Park Hotel halted traffic on Xenia Avenue through downtown Yellow Springs for nearly an hour Wednesday afternoon, Sept. 19.

The driver of the white Hyundai Sonata appeared visibly shaken but unhurt after three witnesses reportedly pulled him out of the vehicle through the passenger-side window.

Suzy Carson, of Chicago, Ill., in town with family to visit a nephew, said she saw the accident from the vantage of the hotel’s porch.

Carson said the Sonata was southbound on Xenia Avenue when it hit the back left side of a white Toyota Corolla SE parked across the street from the hotel. She said the Sonata driver “tried to jerk away” after hitting the other car, and that’s when his vehicle flipped.

“You wouldn’t believe how easy it rolled over,” she said, adding that the driver, who appeared in his early 20s, “wasn’t going fast.”

She said the driver of a northbound semitruck, along with a passerby and a man who came out of the nearby Smoking Octopus shop, all went to the Sonata driver’s aid.

“It was so nice how people helped,” she said.

The passerby, Stephen Hunt, said he was walking his son home from school and had stopped to talk to a friend on the corner by Town Drug when he heard the accident. He said his assistance at the scene was simply what “a person should do.”

Yellow Springs police officers and a Miami Township Fire-Rescue medic unit also responded to the scene. The Sonata driver was examined for injuries and released. The driver’s side airbag of his vehicle, which bore plates from the Jeff Wyler dealership in Springfield, had deployed when the car flipped.

The driver of the parked car said he was in the smoke shop at the time of the accident, about 3:30 p.m. Dan Mueller, 48, of Portland, Ore., said he was driving a rental vehicle while visiting family in the area. He heard the crash, but didn’t see it, he said.