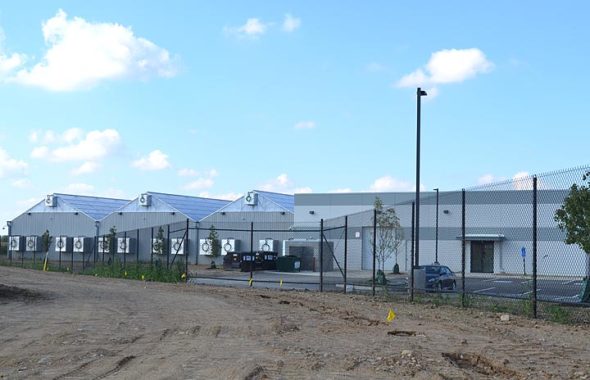 Cresco Labs’ 50,000-square-foot facility on the western edge of Yellow Springs was recently granted a certificate of operation from the state. The company is now growing cannabis for the medical marijuana market. (Photo by Megan Bachman)

Last Friday, Sept. 14, Cresco Labs in Yellow Springs was granted its certificate of operation by the State of Ohio, allowing the company to begin its production of medical marijuana. The company wasted no time moving ahead, and on the next day, Saturday, Cresco gardeners began planting more than 30 strains of cannabis plants in the large, recently built greenhouse facility on the western edge of Yellow Springs.

The plants should be ready to harvest in 90 to 100 days, according to Cresco Chief Communications Officer Jason Erkes on Monday.

“We’ve made a great deal of progress and are one step closer to providing relief to patients throughout Ohio,” said Charlie Bachtell, Cresco Labs CEO, in a press statement released on Friday.

This week’s planting follows more than a year’s process of establishing the new company in Yellow Springs.

That process, launched when Village Council sold the land to Cresco in June 2017, included its being approved last November as one of 12 large-scale medical marijuana growers in Ohio. Following that approval, construction began on Cresco’s new 50,000-square-foot facility on the Center for Business and Education, or CBE, property. The building was finished this summer.

“We’re glad to see things moving forward with Cresco,” Yellow Springs Chamber of Commerce Executive Director Karen Wintrow said this week. “Though there have been hiccups in the state schedule, Cresco kept moving. Construction on the building went well. They approach everything from a professional standpoint and are leaders in bringing products to market. It will be exciting to be part of that.”

While Yellow Springs is the only site of Cresco operations in Ohio so far, the Chicago-based company is growing quickly and has the largest geographical footprint of all cannibis companies, according to the company’s website. It currently has facilities in six states, including Illinois, Pennsylvania and Ohio, and has branched out from medical marijuana into recreational marijuana in the states of Nevada and California. Begun by a group of Chicago investment bankers, the company now has almost 300 employees, according to Erkes, up from about 60 a year ago.

Cresco currently employs about a dozen people in Yellow Springs, according to Erkes, including a half dozen gardeners, a cultivation manager, operations manager and VP of operations.

When its cultivation operation is in full swing, the company will employ about 40 people in the village, he said. Cresco then plans to hire about 20 more employees when it receives state approval to process the plants into medical marijuana products, bringing the total local employment to about 60.

“It will be everything from gardeners to packaging to lab technicians,” Erkes said.

The company has not yet received state approval for processing the marijuana plants into products such as pills, patches and edibles. However, company leaders hope to receive the approval in time to process the current crop of cannibis, according to Erkes.

About half of the new facility is planned for processing the marijuana products, according to Erkes.

Cresco plans to offer in Ohio “a full suite of pharmaceutical-grade products that provide users with consistent, controlled dosage,” according to its press statement. The company’s brands, including Cresco, Remedi, Reserve and Mindy’s Edibles, will include vape pens and cartridges, pills, sprays, patches and edibles, a range of products developed in collaboration with Chicago chief Mindy Segal.

Those eligible for the products include people who suffer from AIDS, Alzheimer’s disease, cancer, Crohn’s disease, epilepsy, fibromyalgia, hepatitis C, multiple sclerosis, chronic and severe pain, and post traumatic stress disorder, or PTSD, along with other diseases, according to the Ohio Medical Marijuana Control Program website at http://www.medicalmarijuana.ohio.gov/.

After Gov. John Kasich signed legislation legalizing medical marijuana in Ohio two years ago, the state set Sept. 8 of this year as its target date for providing the product to those who need it. However, the deadline date has passed and medical marijuana is not yet available.

“This was a very aggressive timeline,” Ohio Commerce Department spokesperson Stephanie Gostomski said in a phone interview this week regarding the delay. “While we understand the significance of moving ahead, we need to do this right. We want a patient-centered and safe program.”

A variety of factors contributed to the program delay, she said, including winter weather that delayed construction of new facilities, a lack of critical infrastructure in some towns, and delays in local permitting.

There are three separate categories of state licensing for medical marijuana companies — cultivation, processing and dispensing — necessary for the program to move forward, and licensing has been approved in each category, Gostomski said.

Cresco applied for all three of the licenses, and hopes the processing license comes through soon. According to Gostomski, 104 companies applied for the processing license, and only 13 met the minimum requirements. Eleven of those 13 have been approved, with the remaining two licenses pending due to the need for more background checks, she said, stating that while she did not know for sure, Cresco could be one of those remaining two.

Cresco has been awarded a dispensary license, although not in the area, according to Erkes. The company will open a dispensary in Wintersville, Ohio, a small village close to the Pennsylvania state line. However, other medical marijuana companies have been approved to open dispensaries in the Miami Valley, with only one license awarded in Greene County, in Beavercreek.

To receive medical marijuana, patients need a state-issued card. According to the state medical marijuana program website, no cards for patients have been issued at this time. The only valid state cards will be issued by the State of Ohio Board of Pharmacy patient registry when it becomes available. Patients may call the Ohio medical marijuana toll-free hotline at 833-464-6627 for more information.

Patients will need to be recommended for a card by a state-certified medical practitioner, according to the website. Three local practitioners are listed on the website as state-certified for medical marijuana: Dr. Kathleen Glover of the Hope 4 You clinic in Fairborn, Dr. F. Stuart “Skip” Leeds, associate professor at Wright State University, and osteopathic doctor Suzanne Croteau, of Homeopathic Osteopathic Family Center in Beavercreek. According to Kettering Health Network in a prevoius News story, the local Community Physicians group of doctors will not participate in the medical marijuana program, and Dr. Donald Gronbeck also stated he would not take part.

According to Erkes of Cresco, the company chose Yellow Springs for its initial Ohio site partly due to support from the community.

“We looked at a number of areas across the state, and Yellow Springs was very welcoming and encouraging to have a facility like this in their community,” he wrote in an email this week. “After meeting with the Village board and discussing our mission as a professional cannabis company, we felt like we were aligned with the same vision and the community has been nothing but welcoming and supportive since our first visit.”

Along with the creation of jobs, Cresco will also bring in more income and property tax to Village government, according to earlier News stories. An additional $37,500 in income tax could be reaped once the company employs 60 to 65 workers, and property tax on the eight acres could be as high as $171,694 annually. That amount would benefit Yellow Springs public schools by $99,000 per year, along with $24,000 year for the Village.