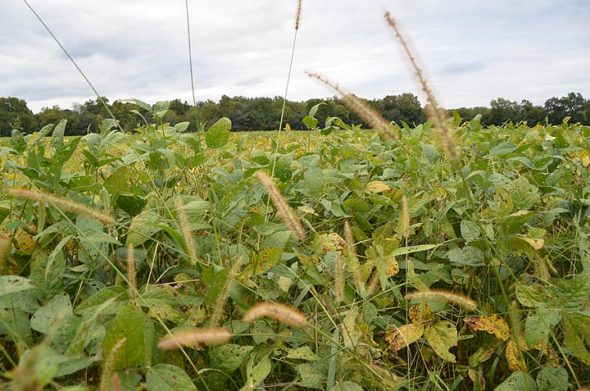 While they differ in their assessment of causes, several local farmers agree on their current situation: it’s a challenging time to be a farmer in Ohio.

This summer, prices for the area’s most significant crops, soybeans and corn, have dropped substantially due to two main factors: tariffs on American soybeans imposed by the Chinese, and the expectation of a robust harvest. And lower prices means that farmers will come away from selling their crops with diminished profits.

“People are discouraged about the prices,” longtime farmer Lamar Spracklen said in an interview this week. “It means you don’t buy equipment, you don’t spend the money on upkeep that you usually spend.”

Spracklen and his two sons farm about 3,000 acres of mainly soybeans and corn in Greene, Clark and Madison counties.

Joe Fulton, another longtimer who farms about 2,000 to 2,500 acres on Snypp, E. Enon and Fairfield roads, agrees that current conditions are difficult.

Soybeans have been especially affected by price decline since the imposition of the Chinese tariffs on soybeans, which were initiated this summer in response to President Donald Trump leveling 25 percent tariffs on Chinese products. The current price for soybeans is down about 25 percent from what it was in the spring, Spracklen said. While in the spring soybeans brought more than $10 a bushel — and in recent years the price has been as high as $17.50, he said — currently, soybeans are priced at about $8.20 per bushel, according to Jennifer Coleman, communications director for the Ohio Soybean Association.

Many, many Ohio farmers are feeling the pain, according to press statements from the Ohio Soybean Association. In 2017, Ohio was the sixth-largest producer of soybeans nationwide, with 4.8 million acres planted in the crop, producing about 263 million bushels, according to the group’s website, http://www.soyohio.org/association. The Ohio soybean crop value is currently about $2.5 billion, and over 60 percent of Ohio soybeans go to international markets, with China the biggest client.

The statement included study results from The Ohio State University that the tariffs could mean up to a 59 percent decrease in Ohio farmers’ net income in six years. And according to a study from the University of Illinois cited in a July 9 issue of Forbes magazine, a farmer’s profitability can be highly variable. A farm with 3,000 acres of corn and soybeans had an operating profit margin of about 25 percent from 2010 to 2014, but that margin fell to a negative 3.6 percent in 2015, rebounding to 4.6 percent in 2016. According to the study, “if soybean prices remain low and cuts farmer’s revenue by 10 percent, it could easily turn a profitable year into a loss.”

Spracklen agrees with the Ohio Soybean Association that tariffs are mainly to blame for the price drops.

“To me, tariffs should be eliminated,” he said.

He understands that some believe the Trump tariffs will ultimately improve the farmers’ situation.

“If Trump’s bluff works, a year from now things will be better,” he said, although he added that he’s skeptical that the action will work.

One local farmer who doesn’t blame tariffs for the price drop is Craig Corry, who farms about 500 acres of corn, soybeans, wheat and hay at the intersection of Grinnell and Clifton roads.

More important than the tariffs in lowering prices has been the expectation of a robust harvest, he said.

“Tariffs are not the main thing,” he said, stating that “supply and demand will have the bigger impact.”

“The major factor contributing to the lower prices is the outlook for a large harvest,” he said.

The expectation of a large harvest, such as farmers have produced for the past several years, will bring prices down, he said, and all signs say this year’s harvest will be robust. And he doesn’t put that much stock in price fluctuations, because “the price of soybeans fluctuates daily,” he said.

Corry supports Trump’s efforts to impose tariffs on the Chinese, and believes that ultimately the move will prove profitable to farmers.

“If the U.S. and China reach a major agreement, it will have a positive effect,” he said. “I’m optimistic that an agreement will be reached.”

When the tariffs against China were announced, Trump stated they were in retaliation for the Chinese theft of intellectual property.

The two farmers’ difference of opinion regarding the tariffs is not uncommon, according to Coleman of the Ohio Soybean Association.

“Farmers are not a monolithic group,” she said. “They have complicated opinions.”

Both Corry and Spracklen agree that farmers do have the option to cut their losses by storing their grain temporarily, in the hopes that prices will rise soon. But that option also comes with a cost, according to Spracklen.

“The cost of storage is higher this year than it has been,” he said. “You can store your grain as long as you want to pay the monthly fee.”

Another option for relief is a recent program to compensate farmers for their loss in income, introduced Aug. 30 by the U.S. Department of Agriculture. The agency has publicized a $12 billion relief package that includes direct payments to farmers and direct commodity purchases by the USDA. Farmers can apply for the program by going online to http://www.farmers.gov/mfp.

According to a statement from the Ohio Soybean Association president Allen Armstrong, a Clark County soybean farmer, the move is appreciated but does not solve the problem.

“We’re pleased to see the details of the aid package released in a timely manner so there can be some certainty for farmers moving into the harvest season,” Armstrong said in an OSA statement. “However, this is a short-term fix and we continue to advocate for free and open markets with our national affiliate, the American Soybean Association, and for a resolution to the trade dispute with our biggest international customer.”

According to Fulton, he has not yet seen any details for the relief program, nor has he applied.

Adding to the current difficulty, according to Fulton, while soybean and corn prices have dropped, the price of other farming-related expenses — equipment, seed, fuel — remains high. Farmers have enjoyed exceptional yields the last four years, during which producers of those “input” costs raised their prices.

“Everyone wanted a piece,” Fulton said.

And now farmers continue to pay those higher costs, while their profits decline.

Because Spracklen, Corry and Fulton are all farmers with decades of experience, and come from families in which their fathers and grandfathers farmed before them, they take the long view.

“We’ve been in situations like this before,” Fulton said. “There have been other trade wars. I think we’ll get through it.”

A sixth-generation farmer, Corry believes his forefathers had to face worse situations.

“I’m certain my ancestors faced challenges too, maybe some that make mine pale in comparison,” he said.

And the good thing about having farmed for decades is that you learn a steady response to even volatile situations, according to Spracklen.