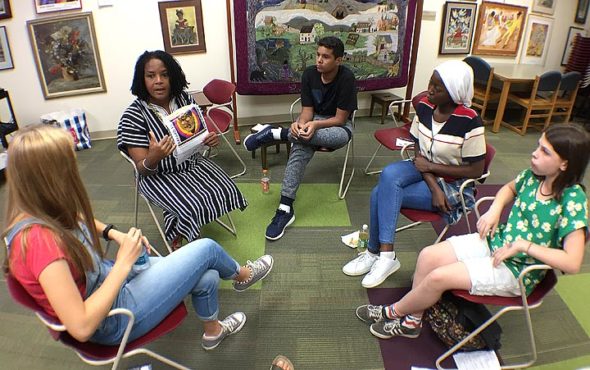 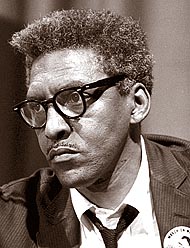 The life of civil rights strategist Bayard Rustin is the focus of a series of regional events through Sept. 9, including four concert performances by the World House Choir, in collaboration with other area choral groups, of the oratorio “Bayard Rustin: The Man Behind the Dream.” (Photo via Wikimedia, Library of Congress)

By Carla Steiger and Carol Simmons

“The proof that one truly believes is action.” —Bayard Rustin

The late civil rights activist Bayard Rustin, an adviser to the Rev. Martin Luther King Jr., was the principal organizer of the 1963 March on Washington, where King delivered his famous “I Have a Dream” speech.

But Rustin, an out gay man, was forced into the background of the civil rights movement because of his sexual orientation. And today, three decades after his death in 1987, Rustin’s name and contributions are not widely known.

In an effort to bring Rustin’s story out of the shadows of history, a series of events, including multiple performances of an oratorio about the activist’s life, will be presented in early September.

The 57-minute musical work, “Bayard Rustin: The Man Behind the Dream,” is the centerpiece of the programming, with concerts scheduled Thursday, Sept. 6, and Saturday, Sept. 8, at the Foundry Theater  on the Antioch College campus, as well as Friday, Sept. 7, in Dayton, and Sunday, Sept. 9, in Cincinnati.

The Yellow Springs-based World House Choir is the anchor performance group of the piece, with additional singers coming from the Dayton Gay Men’s Chorus and several Cincinnati-based groups.

Roma, a frequent collaborator of Milloy’s, wanted to bring the monumental work, which premiered in Minnesota two years ago, to  local audiences. And inspired by Rustin’s life of service and activism, she had the vision of offering a regional symposium of educational programming around the musical performances.

A full list of related activities, many at area colleges, can be found online at http://www.bayardthemanthedream.org.

Local highlights include a 2 p.m. Friday, Sept. 7, showing of the biographical documentary “Brother Outsider” at Antioch’s Arts and Science Building. A discussion led by Kevin McGruder, associate professor of history at Antioch, and Patricia Dewees, an activist and member of the Yellow Springs Friends (Quaker)  meeting, will follow the screening.

And at 9:30 a.m. Saturday, Sept. 8, the Coretta Scott King Center will host a panel discussion on “Non-Violent Direct Action Today.” Participants include Walter Naegle, who was Rustin’s partner in the last 10 years of the activist’s life; Gavin DeVore Leonard and James Hayes, both of Ohio Voice; villager Tanya Maus, director of the Peace Resource Center at Wilmington College; Mila Cooper, executive director of the CSKC; McGruder; and villager Dr. Carl Hyde, who as an Antioch undergraduate spent a co-op semester working in Rustin’s New York City office. All events are free.

A legacy of inclusion

Rustin’s legacy, as a black, gay man, raised as a Quaker, who went to jail as a conscientious objector in World War II,  offers many touchstones for learning and discussion, Roma said in a recent interview.

His life-long efforts toward greater equality, justice and peace are inspirational to the choral director whose own life’s work has included a focus on inclusivity.

“In my 40 years of conducting choirs, it’s been an important value of mine to bring people of different backgrounds and beliefs together,” she said.

The World House Choir, for it’s part, is ethnically, racially, politically and spiritually diverse, with singers ranging in age from 18 to 94. Singers come from Dayton, Urbana, Springfield, Cedarville, Middletown and Cincinnati, as well as Yellow Springs.

Each year, the choir, currently celebrating its fifth season, prepares a September concert program that focus on a specific social justice issue. Past themes have included climate disruption and immigration.

The September performances of “The Man Behind the Dream” represent the work’s Ohio premiere.

Technically, the piece is an oratorio, which is an extended dramatic musical composition for solo voices, a chorus, and an orchestra, usually based upon a religious theme. It is performed without action, costume, or scenery.

Originally commissioned by five LGBTQ choruses around the country, “The Man Behind the Dream” features a variety of musical styles, ranging from gospel to tango to blues to shape-note hymns. The story spans Rustin’s life and features pivotal moments along the way.

After learning about the musical tribute to Rustin, and at the urging of Roma, World House Choir member and retired McKinney Middle School English teacher Aurelia Blake began brainstorming youth activities  that could precede the performance and give more background about the life and work of Rustin.

“There’s hardly a situation where my teacher brain doesn’t turn on and try to figure out a way to approach a situation as an opportunity to teach,” Blake said.

Over the next two weeks Blake will offer a series for students in grades 8–12 to learn about Rustin’s life. She said her goal in this series of meetings is to teach participants about nonviolent activism.

“I want them to be able to see and do it. It’s about more than sitting on the sidelines with a sign,” she said.

The events kicked off with a screening of the “Brother Outsider” documentary on Aug. 27. Three additional meetings, all to be held at the Yellow Springs Public Library, are open to newcomers. They will be Thursday, Aug. 30, Wednesday, Sept. 5, And Friday, Sept. 7, all from 4 to 5 p.m.

Participants will discuss the biography “Bayard Rustin: The Invisible Activist,” written for young adults. At the final meeting Sept. 7, Naegle, one of the book’s co-authors and Rustin’s partner, will host a question and answer session with the students.

Blake, who is still in touch with students, actively recruited participants.

“My goal is to get all kinds of kids — black and white, and LGBT students,” Blake said. “I am particularly looking for outspoken African-American students.”

In addition to reading Rustin’s biography and seeing the movie, students will participate in activities that generate self-awareness and growth. Blake will use 52 “virtue cards” from the Virtue Project International as cues for self-reflection and discussion. Some of the virtues listed on the cards are courage, kindness, giving, and responsibility. Students will write down responses to the cards and then discuss their answers in the group.

“I want students to think of themselves in terms of their potential to become activists, and I will ask them what virtues they could strengthen to be a non-violent activist,” she said. Blake added that she hopes to cultivate a comfortable learning environment where students are not graded or judged.

Desiree Nickell, a language arts teacher at Yellow Springs High School, will give five extra credit points for every session students attend, and is urging students to attend all four sessions.

In addition to learning about Rustin, and becoming inspired to become activists themselves, participating students will improve their speaking and reading skills.

In Nickell’s opinion, “they will benefit from a class taught by Aurelia Blake, one of the most dynamic teachers ever to teach in the Yellow Springs Schools.”

Blake said she was looking forward to the group meetings. According to her, the workshops are in keeping with everything that she believes.

“Education and knowledge are so important, if we are going to change the world, one heart at a time,” she said.

*The author is a local writer and artist.