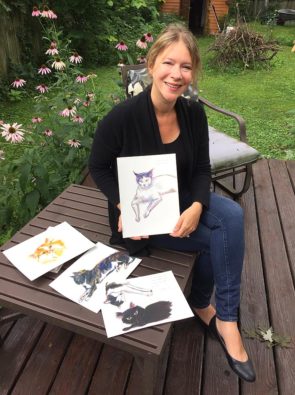 Local author, illustrator and English professor Kate Polak recently showed off some watercolor paintings of cats as part of a children’s book project. Polak recently authored, “Ethics in the Gutter: Empathy and Historical Fiction in Comics.” (Photo by Carla Steiger)

Kate Polak began her love affair with comics in elementary school. In fact, she still has many of her old “Wonder Woman,” “Archie” and “My Little Pony” comics from childhood.

“My folks didn’t have much money, but comics were a cheap present that I adored,” she said in a recent interview.

And although Polak thought she was too cool for comics in high school, she returned to them in college, sifting through the 25-cent bins in front of local comic shops for her collection. Comics ultimately became of academic interest to her as an undergraduate at Ohio State University, and continued to be her focus through her graduate studies at the University of Cincinnati.

Polak, currently an English professor at Wittenberg College in Springfield, is now the author of a book on comics, “Ethics in the Gutter: Empathy and Historical Fiction in Comics,” which was published last year. This year, her book became a finalist for the, which is like the Oscars for all comics and comics-related work.

Polak’s book is aimed at university-level educators to encourage them to use  comics and graphic novels as another way to approach historical atrocities in the classroom. The word “gutter” in the title refers to the white space between cartoon panels, where readers have to imaginatively engage with the action to participate in the cartoon narrative, Polak explained.

In her book, Polak studies the brutal rape that is the core background violence in the “Watchmen” series. She also analyzes the Rwandan genocide, as seen through the eyes of a Hutu teenager in “Deogratias;” and in “Bayou,” scrutinizes the story of a young black girl in the racist South of 1933, in which the girl confronts an alternate universe where supernatural beings formed by hate and prejudice feed on African Americans.

Polak said she got the idea for the book while thinking through how comics address the reader differently than other forms of literature. She relayed how she was disturbed, while co-teaching a Holocaust literature course, to find that many students felt that they were supposed to adopt the subject position of victims, she said.

But in studying traumatic history, Polak found students are more akin to bystanders and perpetrators. Instead of seeing themselves as victims, students can gain more understanding if they explore the ways in which they have contributed, even by inaction, to atrocities.

The concept has direct application in the classroom, according to Polak. By analyzing graphic novels, “students see that there are other ways besides an emotional response to respond to a text,” she said.

Polak instead seeks intellectual and ethical responses. She wants students to be more actively involved in stopping atrocities of all kinds. The students have responded very positively, she said.

“Wittenberg students are an easy sell. They are highly involved, and want to work to alleviate the suffering of others,” Polak said.

Polak, who has been at Wittenberg since 2013, is up for tenure review this year.

In addition to her academic duties, Polak has begun work on several new projects.  She is interested in the memorialization of traumatic events and how people respond to these settings.

For instance, she made a recent trip to Germany with her husband, Ian MacDonald, an English professor at Florida Atlantic University, in Boca Raton, Fla., to view several memorial sites there.  At the Holocaust Memorial in Berlin, she was shocked to see many people cheerfully taking selfies and children racing playfully down the walkways.

“People of all ages were being inappropriate,” Polak said.

Polak’s work is inspired by the pioneering project “YOLOcaust,” by artist Shahak Shapira.  (“YOLO” is an acronym and slang term that means “You only live once.”) He created a photographic website that combined images of people taking selfies at the Holocaust Memorial with footage from Nazi extermination camps.

Polak currently has two of her own graphic projects underway. One involves cats. Polak loves cats and is still in the throes of mourning the loss of her longtime companion, Goo, “a very inbred Persian that was my pretty princess,” who died of cancer earlier this year at the age of 12. Polak’s children’s book, will be a guide on how to select the right cat for your family.

Polak is also an adventurous and talented cook who greatly enjoys having people over to dinner in her art-filled orange cottage on West Davis Street. Cooking magazines compete with academic tomes and artwork for space in her house. These joyful pursuits are a counterpoint to the dark content of her academic work.

“I love my work, I love my students, and I am happy to be in Yellow Springs,” she said.

Reflecting on her 2012 move from New York City to the village, Polak said, “I knew that it was a nice place, but I had no idea how wonderful the community would be. I’m so grateful to live here.”

“Ethics in the Gutter” is available through Ohio State University Press.

*Steiger is a local writer and artist.