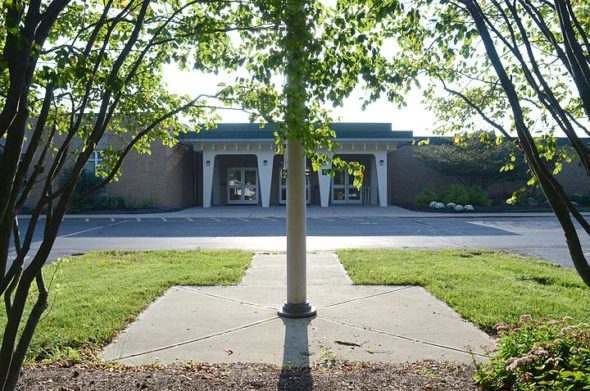 The Greene County Career Center is asking county voters to pass a 1.03-mill property tax levy to build a new center near the intersection of U.S. 68 and U.S. 35 in Xenia. The current facility is located at 2960 W. Enon Road in Xenia Township. (Photo by Megan Bachman)

Looking to propel its aerospace training program, the Greene County Career Center is asking voters next month to support a property tax levy for a new facility.

A local homeowner whose property is appraised at $175,000 would pay an extra $63 per year if the levy is passed, on top of the estimated $157 they currently pay to support vocational education in the county.

The new facility would support the career center’s Take Flight initiative, launched last year to help students fill positions in the region’s aerospace and defense industry through tailored programs in the fields of engineering, manufacturing and information technology.

Career Center Superintendent Dave Deskins said that a new facility is “an incredible opportunity” to both address worker shortages at area companies and help students land local jobs after they graduate.

“We want to keep our workforce strong and we can only do that by readying young adults for existing careers — jobs we know that will keep them home,” Deskins said.

Drone operation, cyber security, aeronautical engineering, aircraft engine manufacturing, robotics, automation and coding were a few of the areas in which local students might gain specific training at the career center, Deskins added.

In addition to accommodating Take Flight, the new center would address infrastructure concerns at the career center’s current facility on West Enon Road, built in 1967.

A recent assessment by the Ohio Facilities Construction Commission found issues with the school’s plumbing, HVAC and electrical systems and roof, according to Deskins, and provided another reason to build anew.

“Our building looks pretty nice but our infrastructure is 50 years old,” Deskins said.

If the levy passes, the Greene County Career Center would move from, and sell, the West Enon Road facility, located four miles from Yellow Springs.

Around 700 students currently attend the career center, and an additional 2,300 are served through satellite programs in other schools in the district, according to Deskins. Both figures are 15-year highs, added Deskins, who became superintendent in 2014.

YS school board weighs in

At its Aug. 9 regular meeting, members of the Yellow Springs Board of Education briefly discussed the proposed career center levy. Although generally supportive of the career center and the levy, the board did not move to officially endorse it.

Prior to the meeting, Deskins had asked each of its school districts to pass a resolution in support of its November levy issue. But Superintendent Mario Basora did not place a resolution on the board agenda, saying the defeat of a local school levy this spring gave him pause.

“We’ve heard from a lot of community members about affordability,” Basora said. “It is only 1.03 mills but it’s 1.03 mills less than our school district can go for,” he added.

Board President Aïda Merhemic also cited the recent levy defeat in her comments. Although she supports the career center and “what they can offer our students,” she was ambivalent about supporting a levy resolution.

“I don’t want to feel like I am pushing,” Merhemic said.

Board member Steve Conn, who represents the local school district on the career center’s board, emphasized the unique opportunity of the Take Flight initiative to provide workers desperately needed in one of the country’s largest aerospace manufacturing corridors.

“There is no other program in the state and really in the country that trains students in this field,” Conn said.

Conn added that renovating the career center’s current facility is not cost effective. The OFCC had estimated it would take $24 million to renovate the current building, according to Deskins.

And by moving to the geographical center of the county, the career center would be closer to the majority of the students it serves, Conn said. According to levy promotional materials, students in five of seven districts would have a shorter commute, while the new location is farther away for students in Yellow Springs and Fairborn.

Conn added that the facility’s location lacks visibility and is inconvenient to most of the county.

“I think we’re the only district that likes the career center where it is,” Conn said.

Moving the career center closer to where aerospace firms and defense contractors are congregated, near Wright–Patterson Air Force Base, is part of the career center’s strategy to work closely with such companies, according to Deskins.

Wright–Patterson Air Force is one of the largest Air Force bases in the country and a major recipient of research and development funds, according to Deskins. The availability of defense contracts has led to a resurgence of manufacturing in a region once geared towards the automobile and cash register industries, Deskins explained, and is a shift the career center can capitalize on.

“All of these engineering organizations come to this area to bid on these [defense] contracts to help that research,” Deskins said. “And they are begging for those workers.”

“We are not aware of any high schools that are offering this kind of a unique program in such proximity to a military installation as we have the opportunity to do with Wright–Patt right here,” Deskins said.

A few years ago, a career center survey of area companies found that hundreds of jobs were going unfilled in the Dayton region annually due to a lack of skilled workers. Meanwhile, area students were unaware of the opportunities in their backyard.

Deskins cited several examples of growing companies in fields of aerospace engineering, medical equipment manufacturing and robotics. For instance, one Dayton firm makes pins to mend a broken femur, another designs and builds bomb-detonating robots for police and military applications, and a third is looking for drone developers and flight technicians for international missions run out of the Springfield Armory.

“Kids don’t realize the opportunities in these careers and how well they pay,” Deskins said.

Readying students for careers in the aerospace and defense industry starts at a young age, in career center-funded programs that, beginning in kindergarten, “expose students to air and space concepts,” Deskins explained. Beavercreek school, for example, recently purchased an airplane through a state grant.

“Nowhere I am aware of are kids getting these concepts from kindergarten up,” Deskins said.

Finding the money to build

As part of its connections with local businesses, the career center maintains business advisory members that collaborate in each of its various labs and, in general, “is pretty closely knit with business and industry,” Deskins said. But after the center reached out to area businesses, the companies said they wouldn’t be able to pay for “bricks and mortar” at the new career center. However, they stand ready to partner once it’s built, according to Deskins.

The career center also fished for other state funding, but came up short. Although the OFCC usually follows its assessments with offers to partially fund facility improvements, by state law the OFCC cannot provide financial assistance to career centers. Deskins fought for a year and a half to lift that restriction for a limited number of career centers each year, helping to draft legislation that made its way to the desk of Gov. John Kasich. But last year Kasich used a line-item veto to eliminate the provision, leading the career center to pivot to county voters.

“We were hoping the state would support us without going back to the voters to fund this. The state said no, so the board went back to the drawing board,” Deskins explained.

Another recent survey completed by the career center found that county voters are both pleased with the new direction of the career center and willing to support a levy, Deskins relayed. Nearly 60 percent of respondents replied affirmatively to the question, “Do you believe the Career Center should ask taxpayers to construct or invest in emerging new technologies that enhance student education, even if it requires additional funding via a tax levy?”

Yet success is not guaranteed. Recent new levy defeats at the career center, including measures in 2006 and 2007 to replace the 1996 capital improvement levy at its original funding level, fell short. While that levy was renewed in 2016, it will only generate 0.53 mills.

Still, Deskins is optimistic that county voters will see the value in the career center, which hasn’t received an increase in tax revenue from residents in more than 20 years. Signs have begun popping up throughout the county in support of the levy by promoting the center’s role in “Building Local Workforce.”

According to Conn, the levy is the culmination of three years of work to expand the career center’s role in the region, during which Deskins reached out to everyone from the governor to local manufacturers.