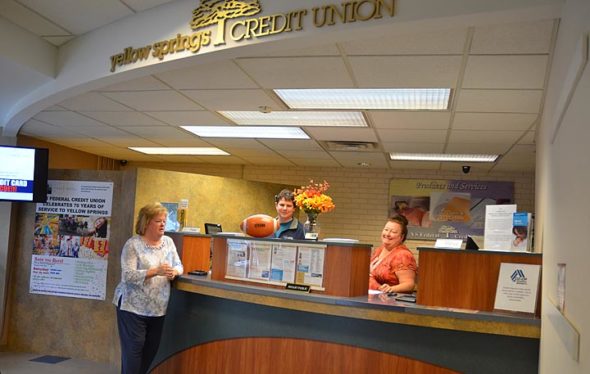 The Yellow Springs Federal Credit Union is marking its 70th anniversary with a public celebration on Saturday, Sept. 29, from 10 a.m. to 2 p.m., at its downtown offices. Pictured are YSCU President and CEO Sandy Hollenberg, left, and employees Peter Mayne and Angel Johnston. (Photo by Carol Simmons)

What began as a small cooperative financial initiative is now a 70-year-old local institution.

But throughout the growth and changes experienced over the years at Yellow Springs Federal Credit Union, or YSCU, the concept of community service has remained a constant, Sandy Hollenberg, YSCU’s president and chief executive officer, said in a recent interview.

This Saturday, Sept. 29, the credit union is marking its seven decades of serving the community’s financial needs with a public celebration from 10 a.m. to 2 p.m. at its downtown office on Xenia Avenue.

“Philosophically, our focus is to be here for the community,” Hollenberg said.

The credit union remains a not-for-profit  financial cooperative where customers are members who own the enterprise together.

Its goal is “to benefit the members, not to line the pockets of shareholders,” said Hollenberg, who has 31 years experience in the industry, with the last 12 in Yellow Springs.

“We pride ourselves on providing education and trust to the members to make wise choices, rather than selling them products,” she said.

YSCU membership is open to anyone
who “lives, works, worships or goes to school in Greene County,” Hollenberg said. “However, we’re very specifically focused on the village of Yellow Springs.”

Membership at the end of August, including a few businesses and nonprofit organizations, numbered 2,039, according to YSCU records.

Incorporated on July 19, 1948, with an initial 13 members, the business took shape out of conversations at the former co-op store on the corner of South High and West Davis streets, according to historical accounts reported in past editions of the News.

Those early discussions continued at organizational meetings in the home of YSCU “founding mother” Caroline Urie, a reported Socialist and war-tax resister.

Starting share deposits of the new enterprise were $2,306.13, and its first loan was for $50, according to credit union records.

Its first home was a desk and chair in a corner of the building currently occupied by Ertel Publishing on South High Street. And in the late 1950s and ’60s, it moved to office space provided by Antioch Bookplate Co. in a downtown building that now houses Bonadies Glass Studio.

Today, YSCU boasts $18,922,235 in desposits and more than $9,804,115 in loans. Its current home on Xenia Avenue is in a building constructed in 1977 for the credit union’s purposes. For the 16 years prior, YSCU occupied an older structure on the same site.

The 1977 opening of the then new building prompted an eight-page “B” section in the Yellow Springs News.

This weekend’s anniversary celebration  may not be quite so auspicious, but the credit union is planning a variety of ways to mark the occasion.

In addition to party fare of food, beverages and carriage rides, YSCU is offering a range of financial incentives and benefits for new and existing members, including loan specials.

As it looks to the future, YSCU is exploring new ways to support the local economy, in addition to meeting individual members’ banking needs, Hollenberg said.

“Our current goals are to continue to improve the day-to-day banking options for our members as well as working on developing more creative ways to help nonprofits and local investors accomplish their goals,” she said. “We’re working on the member side and the community side.”

This past July, the credit union hosted a visit by Michael Shuman, a community economics expert from Washington, D.C., who met with representatives of more than a dozen local groups over three days.

Having identified nine promising projects that emerged from the sessions, Shuman last week made his recommendations about which ones the credit union might help make a priority.

The leading idea is a shop-local debit card that would offer a convenience for members as well as an incentive for making purchases in the 45387 zip code, Hollenberg said.

“We’re not at a point to say this is definitely coming,” she said, but she is researching the costs and steps needed to bring the idea to fruition.

She said Shuman’s second choice is the creation of “an investment portal” in which the credit union would serve as a hub for linking projects — by individuals, groups or nonprofits — with investors and capital.

The credit union’s recent action on behalf of Agraria “is a very good example of that,” Hollenberg said. Community Solutions was able to purchase the Agraria property last year through a handful of investors guaranteeing a low-interest loan secured through YSCU.

“We are a very progressive forward [looking] credit union for being so small,” Hollenberg said, noting that YSCU remains one of the smallest credit unions in the state.

As a member of Community Development Financial Institutions, or CDFI, an affiliation that was awarded last year, the local credit union can draw on a wider network of resources.

At the same time, new ideas and creative ventures must be undertaken while following federal and state rules and regulations as well as the oversight of external auditors,  insurance and bond regulators and YSCU’s own policies.

“We are highly regulated,” Hollenberg said, but with that regulation and oversight comes certain assurances. The Federal Deposit Insurance Corp., or FDIC, for example, offers insurance of up to $250,000 per member.

With three full-time and two part-time employees, YSCU also has a seven-member volunteer board.

Hollenberg said they all feel a responsibility to the community that was special in 1948 and remains so today.

“We have a very unique, wonderful place with a whole lot of wonderful people,” Hollenberg said.