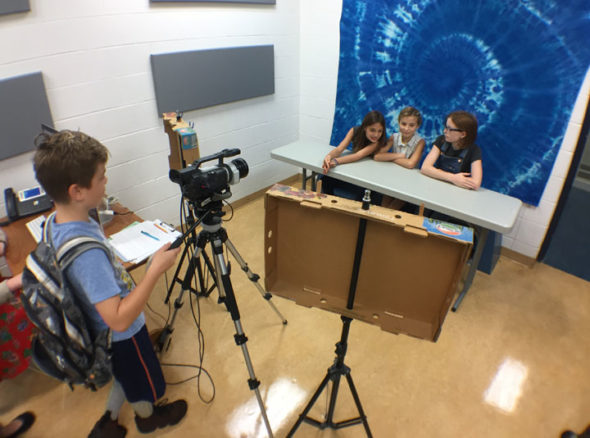 Mills Lawn student Aiden Gustafson works the camera as, from left, Stella Platt, Gabriella Kibblewhite and Tiger Collins get ready to broadcast the news on WMLS. (Photo by Carla Steiger)

After the opening, the girls made a brief public service announcement urging students to adopt shelter puppies. Stella then asked, “Do you guys want to hear an amazing joke? Why wouldn’t the shrimp share his treasure? He was a little shellfish!”

The anchors then descended into a fit of giggles. It was typical of the zany humor favored by the students.

“I have a very cool instrument for you — a contrabass clarinet,” he said with enthusiasm. He then played a song, stating that the instrument has been compared to the sound of a chain saw.

Information from the broadcast included the date, the daily cafeteria menu and the different events taking place at the school, such as the rehearsal schedule for “The Lion King KIDS.” Information about important days in history, wacky holidays such as Talk Like a Pirate Day or One Hit Wonder Day also punctuated the show.

The show ends differently each day, depending on the broadcasters. On that Tuesday, Tiger told students to “Use Skills for Life, including respect, responsibility … and cooperation.” The show concluded with a complicated clapping routine while the hosts spelled out “Bulldogs.”

The WMLS students are uniformly enthusiastic about participating in the program, as they discussed after the show.

“I like something to do in the morning and it’s something to do with friends,” said fourth-grader Gabriella Kibblewhite. Her mother, Molly Lunde, said that she appreciates that Gabriella has been able to make new friends from different groups in the school, whom she wouldn’t ordinarily get to know.

For Tiger, “I like learning to use the computer and the camera,” she said.

And camera operator Cali Jones, who is in sixth grade, likes knowing that her role is essential. “I feel like my job is important. If I didn’t do the computer, we wouldn’t have the news,” she said.

A self-selected group of fourth- through sixth-graders write the WMLS scripts, run the camera and computer, and broadcast the news Monday through Friday, according to newsroom supervisor Lynda Love Highlander. The transmission reaches 362 students plus staff, according to Mills Lawn Principal Matt Housh, in addition to the friends and families watching from home.

The production takes place in a room off the gym that has been turned into a studio, and an area on the back of the stage is used to write scripts. The station has a computer that hooks into a video camera that begins streaming the program, which goes live at 8:17 a.m. each day.

Managing a junior newsroom is a new experience for Highlander, who has worked in TV journalism since 1994 at CNN in Atlanta. Her previous experience as a TV producer included several years at “Showbiz Today” and then 13 years as a special projects producer, where she conducted interviews, produced, researched and wrote scripts.

Highlander is a 1988 graduate of Yellow Springs High School and also attended Mills Lawn Elementary School when she was growing up. She knew that she wanted to work in TV from the time she was in high school, after which she attended Emerson College in Boston to earn a bachelor’s degree in television production. 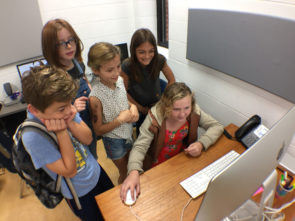 All of her media skills, and new ones such as class management, come into use with WMLS.

“One of the challenges of working with a young crew is keeping them focused — whether it’s practicing their lines or writing the script,” she said.

A group of 25 to 30 students participate in the program and it takes about seven students to run the show each day. The responsibility is rotated between the students, according to Highlander, and if they work the camera one week, then the next week they’ll be on the news. She ensures that everyone gets a chance to do all the jobs.

Highlander said that the reasons students apply for the news show vary from having siblings who previously participated to wanting to enhance life skills such as confidence. The application states that students should enjoy being on camera, writing scripts, and importantly, working as a team. The applicants must promise to show up for their assigned days at 7:50 a.m.

According to school counselor John Gudgel, the broadcasts allow him to utilize the media in a meaningful way to approach age-appropriate topics that include bullying, the importance of reading, and being respectful.

“I cite examples to help students succeed and show them the importance of behaviors that can lead them to being successful,” he said.

Principal Housh, who appears on Monday and Friday mornings, appreciates having this platform to address the entire school. He particularly enjoys his Friday responsibility of publicly recognizing students for their kind acts, as part of the “Bulldog Buck” behavior reward program. According to him, it’s another facet of the “Skills for Life” philosophy that also acknowledges community service and peacemaking.

The WMLS broadcast “nurtures the students’ passion for communication and journalism,” according to Housh, while at the same time it aids the students in performing community service.

“I believe the morning news significantly enhances my work and has a huge impact with students, staff and the larger community,” he said.

Although the students really like working on the show, in most cases it has not affected their long-term career goals. Their aspirations vary, including wanting to become massage therapists, FBI agents, paleontologists, or geologists. Only one student, Solomon Kemper, who is in fifth grade, wants to stay in front of the camera, stating he wants to become an actor.

*Carla Steiger is a local writer and artist.