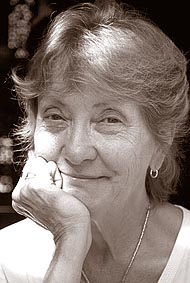 Mary was born in Hot Springs, Ark., on May 14, 1941, the only child of a New Orleans doctor, 54 when she was born. Her mother, a nurse 30 years his junior, was straight off a farm near Bumblebee, Ark., to which Mary’s father brought electricity, and where Mary spent memorable summers and, for a time, attended a one-room schoolhouse during her childhood.

Mary was entering high school when her family moved from Dallas to Denver for her father’s health, where she had to leave her southern accent behind as she became increasingly involved in theater.

She was 17 with a new baby girl, Sheri, when her father died. Her mother, unhappy with Mary’s separation from her high school husband, took the money set aside for her education and kicked her out of the house.

Supporting herself with secretarial jobs, Mary attended University of Colorado night school in Denver before finding her way to the main campus in Boulder, from which she received a master’s degree in English.

Married a second time to a dismal fellow who ran off following the birth of her second child, Paul, Mary was pursuing a divorce when she reconnected with Rick, home on a 30-day leave after re-upping with the Peace Corps in East Africa. Needless to say, he never went back.

Among Mary’s many admirers and mentors at CU was Dr. Charles Nilon, the only black faculty member at that time, who recommended her for a teaching position at Rhode Island Junior College.

Driving east in a battered VW bug with two children, warm blankets and an old dog, Mary arrived in Providence where, to everyone’s surprise, this person so highly recommended by Dr. Nilon … was white!

Back in Colorado for the summer, Mary and Rick soon married, with him adopting her two children. Having outgrown their 100-year-old log cabin, two rooms and a path on a mountain stream above Boulder, they moved, with Rick driving the stock truck with their stuff and Mary pulling two horses with the pickup, to a farmstead on the Central Oregon high desert. There they raised their children, along with cattle, hay and commercial peppermint for the next almost 30 years, during which Mary, game for it all, could as easily operate a tractor as cut cattle on her Appaloosa mare.

Arriving in Oregon to find that public kindergarten didn’t exist for their 4-year-old, Mary started her own. Ten years later the school district, seeing where these advanced first-graders were coming from, encouraged Mary to return to school for her teaching certificate — which she did. She taught middle and then high school English and drama for the next dozen years while turning a moribund theater program into a standing-room-only community gem.

Encouraged by a new superintendent — from Ohio, no less — to get her doctorate, she spent many summers and exhausted every leave known to education attending the University of Oregon, 150 miles west over the Cascades in Eugene, all while holding onto her job at Redmond High.

Mary was in her early 50s when she received her Ph.D. in theater arts. She had taken several temporary positions at Pomona College in Southern California when, at a national theater conference, she met those who would become her future colleagues at Wright State University in Dayton. When they encouraged her to apply for an upcoming position at Wright State, she told them no, she wished to remain in the Northwest.

Luckily they persisted, and Mary agreed to teach movement and theater for one year while Rick held down the farm. Living alone that first year in Yellow Springs, Mary loved walking down for a cup of coffee and a movie in the village, described by some as “that little pocket of pestilence,” which made her love it even more.

At Wright State, Mary hit the ground running, her one-year position becoming tenure track, and following tenure, a full professorship from which she retired after 15 years. At WSU, Mary became well known for directing main stage productions for which she received endless accolades, including WSU’s Outstanding Faculty Award.

A nationally published poet, Mary loved her family, her friends, her farm, her horse Scooter, her students (many in touch since kindergarten), most of her colleagues, Shakespeare, her yoga pals, cruises with “A Prairie Home Companion,” going with Threshold Choir to Bali and singing to the elephants, her farm collie, Haiku, her house cat, Princess, her water garden out the back door, a good gin and tonic and dancing in the kitchen. A lifelong member of the Southern Poverty Law Center and Planned Parenthood, Mary loved this life and life loved her. What a gal!