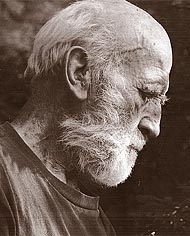 Alan was an amazing and diverse artist, skilled in drawing, painting, sculpture, landscape design, architectural design and masonry. He is best known for his work in creating the iconic brick structure located between Mills Park Hotel and the Speedway gas station in Yellow Springs. For many tourists, it has become a hot spot to take photos, but for the locals who witnessed Alan working outside with brick and mortar in hand for the past five decades, the place and the man represent something more personal: a part of our lives, community and home.

Alan Winhouse Macbeth was born on Dec. 14, 1934, in Chillicothe, Ohio, and passed away on Nov. 23, 2017, at Soin Medical Center, after he went into cardiac arrest and attempts to revive him failed. He was 82 years old.

In the days preceding his death, Alan spoke fondly about his childhood in Chillicothe, where he grew up with two siblings, Duff Macbeth and Sally Macbeth Defue. He loved art and sports, and excelled in both from a young age and throughout college. His father, Allan W. Macbeth, was from Inverness, Scotland, and was a successful financial executive for Mead Paper Corporation until his sudden death due to heart failure in 1939. His mother, Ruth M. Macbeth, was born and raised in Chillicothe, and was a stay-at-home mom who kept her children and parents close as a family unit.

Alan moved to Yellow Springs in 1962 when he was 28 years old. He was ready to begin living life on his own terms, and as the man he was: an artist. He carried with him a heavy sense of failure after leaving Ohio State University just shy of earning his bachelor’s degree in fine art with a minor in sports education. It is fair to say that outside pressure to comply is what kept Alan in the classroom during most of his formal education, which was a credit to his endurance, considering the non-conforming character that he was.

The small town embraced Alan with open arms and gave him the freedom and encouragement he needed to discover and develop his passion and talents as an artist. For that he was deeply thankful, and forever faithful to Yellow Springs.

Alan’s brick structure that we see today on Xenia Avenue hardly resembles the humble home that he moved into in 1963. He named it Oten Gallery, and, as he told it, “oten” was a word he learned from his Nigerian friend and roommate in college, which means “setting up shop.”

In the main area, he sold his artwork, but focused primarily on selling artwork by local artists; in the back area, he made custom frames, which paid the bills for many years. In the early 1980s, he sold his framing business to Ken Simon, who named it “Gemini” and moved the storefront closer to the center of town.

In 1964, Alan married Dorris (Rife) Macbeth and became a step-father to her children, Sarah and John Calland, and together the couple had a daughter, Molly Macbeth. For a time, the family lived in the Oten Gallery, among the many construction projects and constant flow of artists, friends, Antioch students and patrons who stopped in to visit with Alan. He loved to challenge people into a passionate debate over politics, history, religion or anything worth standing for. Often, he played the devil’s advocate. There were plenty of heated arguments over the years, and sparks would fly! Being the sportsman he was, he thought of debate as a healthy game — when it was all over, you just dust yourself off and shake hands.

In the 1970s, Alan was raising his daughter Molly as a single parent, working to pay the bills, working on his property and trying to focus on his drawing and painting. It was in 1971 when local mason and friend, Russel Jones, dropped off a load of bricks he thought Alan could make use of. At first, Alan built a flat containing wall in front of the Oten. It wasn’t long before his creative process kicked in, and he needed to build what he imagined, which was a much more grand, organic, sculptural structure. So the bricks came down and the bricks went back up. It was a process that would take him the remainder of his life to finish.

Alan contributed much to the community. He championed artists by providing studio workshops with live model sessions and art classes for children and adults. He was a coach for Yellow Springs Little League baseball and soccer team.

He came up with fun ideas to bring the community together, like the annual pumpkin carving contest. That was a lot of work for him, but so much fun to participate in. Both children and adults had the opportunity to win in several categories. The pumpkins filled the gardens and lined the brick archways, and as soon as it was dark, the jack-o-lanterns were lit and the judging commenced. The children won toys and the adults won lovely pieces of artwork donated by local artisans. When Dick and Tom’s Cafe closed their doors, Alan came up with the idea of a breakfast club. He volunteered to make breakfast at the gallery on Saturday mornings for his friends, or for anyone who wanted to join, and asked for a small donation to cover the cost of food.

I miss my father more than I know how to express. He taught me the art of making stained-glass windows in lead and copper foil. He called me “love,” fed me, he often sent me off to school with a lunch he packed in a large, brown grocery bag and picked me up from school in a bright yellow, rusted-out Ford Pinto. Once he called me “beautiful,” he called me a “hard worker,” and he thought I had talent as an artist and ballet dancer. He wiped away my tears and raised me alone the best way that he knew how. He called me a “survivor” and a “fighter.” He planted day lilies for me in his garden. He wrote my name in cement — and he will forever be imprinted on my heart.

Please join me in honoring Alan’s life — a life lived so fully, and with great passion.
—Molly Macbeth

If you would like to contribute to the memorial service with a personal story, photo, artwork, music, poetry or food and refreshments, contact Molly at 660-553-7722.

In lieu of flowers, donations may be made to the Yellow Springs Senior Center by visiting their website at seniorcitizenscenter.org or by calling 937-767-5751.

The Yellow Springs Arts Council is currently hosting an art show in honor of Alan, entitled “As He Saw Us,” featuring a collection of portraits and local faces that Alan painted over the years. They are on display until Jan. 6 at the John Bryan Community Center on the second floor.