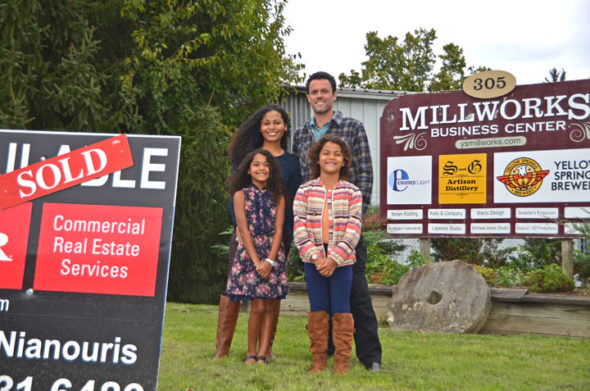 New villagers Jessica Yamamoto and Antonio Molina, pictured with their nine-year-old twin daughters, Sophia and Jessie, are the new owners of Millworks Business Center. The couple buys and rehabs properties that they resell or maintain as rentals. (Photo by Carol Simmons)

After being on the market for more than 18 months, the four-acre industrial and office complex was purchased in September by husband and wife business team Antonio Molina and Jessica Yamamoto.

The couple, who recently moved to town with their 9-year-old twin daughters, purchased the property in the 300 block of North Walnut Street for $1.15 million, according to online real estate records.

In a recent interview, the couple said they hadn’t come in with any major plans to change the composition of the 48,000-square-feet complex, which is at full capacity with eight tenants, ranging from artist studios, to offices, to business operations, to a brewery and a distillery.

“We’re getting to know the tenants right now, and [learning] their plans,” Yamamoto said. “We want to see what the current tenants are interested in doing.”

The only immediate structural plans are “to paint the whole property right away,” Molina said. Also, “the roofs need attention,” he added.

Molina and Yamamoto are in business to buy properties and rehab them, either to maintain as rental properties or for resale. Molina describes himself as a builder, who fell in love with the work as a 10 year old helping his grandmother tear apart and then rebuild a bathroom of a house she was refurbishing.

The couple said they were originally looking into the possibility of buying the Union School House, but when that venture didn’t work out, they became aware of Millworks.

A life of adventure

Natives of northern California, the couple said they met as children — Molina’s younger sister was in Yamamoto’s first-grade class — and they started dating when he was 22 and she was 17.

They said they left their home state nine years ago, spending time in Nevada and Texas, and for the past five years living in Florida, while also traveling extensively around the world. When their daughters, Sophia and Jessie, were 18 months old, the family took a bicycle trip from San Francisco to Belize, camping out or staying with a network of other cyclists — found through an online website for bike travelers — along the way.

Now that they’ve settled in Yellow Springs — buying the house on Xenia Avenue formerly owned by longtime villager Hazel Tulecke — they’re returning the hosting favor, recently welcoming a couple of cyclists on a trek from Boston to Los Angeles, they said.

They said other travels have taken the family for months-long stays in such places as India and Thailand, while their business ventures have included operating a bed and breakfast in Las Vegas and opening a pizzeria in Mexico.

While in India, however, their girls, then 4, started talking about wanting “to settle down,” the couple said.

“They wanted to have a permanent home,” Yamamoto said.

The family chose Florida, because it looked like “a Mecca for children,” with beaches and Disneyland.

They bought a house, moved in and six months later, the girls asked, wistfully, “Remember when we used to travel,” their mother recalled with a smile.

So they resumed traveling while maintaining the Florida house as their home base, homeschooling the girls as they criss-crossed the country. But Yamamoto said they began to see Florida as better suited for vacations than a home.

And then Hurricane Irma hit.

“It was the last straw,” Molina said. The family wasn’t in jeopardy, but “it was a big mess to clean up” afterward, he said.

“We wanted to find a more suitable home base, Yamamoto said.

“But we didn’t know where,” Molina added.

Separate summer camps for the girls — one in Michigan, one in New England — brought the family northward, where they said they found friendly, welcoming people in Ohio. Working off an online list of the best “cool, artsy small towns” in Ohio, they visited Yellow Springs and were smitten with the village, Yamamoto said.

“My husband said we’re not moving again, so I had to be sure,” she explained, thus they continued down the list of artsy towns. But nothing felt as right as Yellow Springs had, she said.

“So here we are,” she added

The couple said they’re thrilled with their decision.

“We like knowing everybody. We like being able to go into a store and the people remember us and we remember them,” Yamamoto said.

They said they plan to stick around and don’t intend to sell the Millworks property.

“We plan to keep Millworks and pass it on to our kids,” Yamamoto said.

According to past News articles, the Hoovers, Love and Young bought the property, then three acres, at auction in 1991 to create rental space for businesses in the village. The purchase price was $225,000.

The property, which began as a cannery in the 1890s and became a seed company in the 1930s, was largely unimproved at the time of the 1991 sale, lacking bathrooms and heat, and in some sections even, floors, according to the last owners.

An additional acre, including the parcel that fronts Fairfield Pike and an area once used for loading docks along the former railroad, now the bike path, was eventually added.

Over time, the complex has played an important role in the local economy by offering a rare space for local business and light manufacturing to operate, according to Yellow Springs Chamber of Commerce Executive Director Karen Wintrow.

The previous owners “were incredible entrepreneurs and visionaries,” Wintrow said in a recent phone interview.

Wintrow said she sees that legacy continuing. “It’s exciting to have someone young and energetic” buy the property.