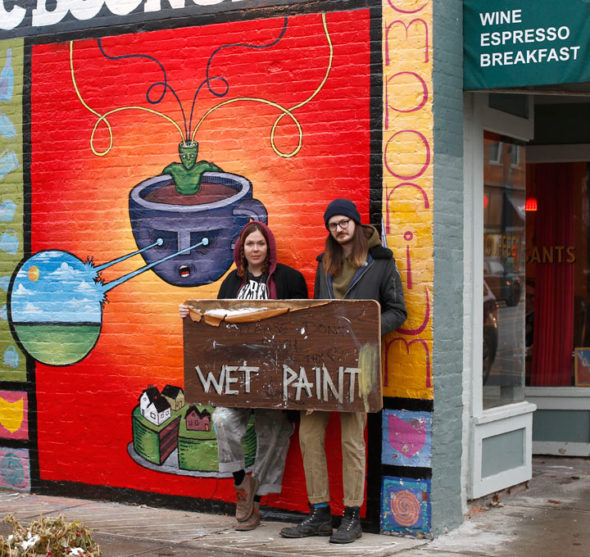 Mural artists Sarah “Golden Child” Dickens and Dylan Sage pose by Sage’s recently completed mural on Xenia Avenue. A VIDA is being awarded at a ceremony Wednesday, Dec. 12, at 5 p.m. (corrected time) at the Emporium to recognize the many muralists who have beautified the village over the years.

VIDA awarded to muralists of YS

The murals that brighten many walls in the business district of the village are receiving formal recognition — the Village Inspiration and Design Award, or VIDA.

“The VIDA trophy will sit on the bricks between the Emporium and the Senior Center,” said John Fleming of the Arts and Culture Commission. “It will be just off the sidewalk — a spot we are calling ‘the Gateway to the Murals,’ though I think some muralists refer to it as ‘the Power Strip’.” 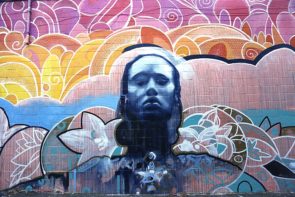 For a special photo feature on the Murals of Yellow Springs, click here.

The public is invited to a ceremony at 5 p.m. (corrected time) Wednesday, Dec. 12, at the site, with a reception following at the Emporium, including free coffee and Greene Canteen pretzels.

The recognition aligns with the recent restoration of The Jungle mural in Kieth’s Alley, initiated by ACC and funded by YS Community Foundation, and the completion of the new mural on the wall of the Emporium.

However, the award celebrates the creative contributions of many artists who have been doing murals around the village for decades. The list includes Sarah Dickens, Pierre Nagley, Travis Tarbox-Hotaling, Dylan Sage, Tony Siemer and many more, plus those whose names have been lost to time.

Fleming said the award “not only acknowledges past muralists, but also invokes the future, and demonstrates the village’s support of murals.”

The award will be transported from its current location at the Women’s Park along the Little Miami Scenic trail to the new site via Sandy King’s horse and carriage, weather permitting.

Jungle of the Golden Child
The restoration of The Jungle mural was done by Sarah Dickens, who goes by “Golden Child” in art circles. It is on the east side of the alley behind Dark Star Books, and has been revived in vibrant greens and earth tones. Dickens painted the original mural about 16 years ago.

Dickens also recently completed a stunning portrait of a woman on the opposite side of the alley, next to the Prince portrait she did in 2016. She is humble about the award that some say is overdue.

“I’ve felt honored all this time,” Dickens said. “Simple things like just a pat on the back, or some encouragement has been my award the whole time.”

“I’m a restless person. I came to Yellow Springs when I was 16, then I traveled to Hawaii off and on multiple times, and I always got homesick for the alley. I moved to Denver and lived there for four years. I’ve been back for going on six years now. Believe it or not I did get homesick for the familiarity and the freedom,” Dickens said. “I feel the most free here.”

Self taught, Dickens is artistically restless as well. “I just jumped into it right after high school when I started traveling,” she said. “I made money from sketches, or photographic portraits or paintings. I don’t have a formal background.”

“It’s very emotionally driven,” she continued. “I’ll feel something, I’ll find an image, and I’ll work with that image, whether it be my own photography, or someone else’s image, and it’ll make me feel a certain way, then I’ll just start painting it. Pierre [Nagley] always calls my style ‘spunky style.’”

“Just give me some paint, there’s the wall, let’s just do this,” is her motto. “I like to go back to a Bob Ross thing where you can’t make a mistake. I really believe that, and the fear is gone.”

Law of the free wall
There are several spaces in the village that are considered “free walls” among the area muralists, and anyone can paint on them.

On the free wall, the artists have to come up with their own funding, either out of their own pocket, or by finding donors of cash or materials.

“When I did my last mural, the woman’s face, it was liberating because I got to paint whatever is on my mind,” Dickens recalled. “Getting to paint what you want is nice, and the downside is figuring out what it’s worth to you to do it. The Emporium has donated money for paint in the past, Current Cuisine has donated food. A lot of times when I’m out there, people will bring me dinner or paint or a brush or just a pat on the back.”

Painting the free walls in Kieth’s Alley is a tradition going back about 20 years. Nagley was painting on the larger wall when he ‘gave’ Dickens the wall that Prince is on now.

“Rules have been developed between the artists,” Dickens said. “There’s an agreement, a kind of respect, where you at least give a little warning [when painting over another artist’s piece]. It used to be just renegade, where one day his would be gone and mine would be there and vice versa, but now we talk to each other so that each of us can talk to the community.”

“And now we have a new rule,” Dickens continued, “which is try to incorporate some of the past that was on the wall into whatever you’re doing now. On the one I’m doing now, I kept the upper part, the colorful part that Pierre did previously, and I worked with that color scheme and put mine on under it.

“So if someone wanted to work on it, they don’t necessarily have to ask permission from us, but we would like that if an artist is going to contribute to the work, that they integrate it in such a way that it gives respect to what’s been there before. Even if it does take over the majority of the wall, just leave a little piece.”

Pop life
Dylan Sage has the newest mural, the eye-catching Pop Art design newly adorning the wall of the Emporium.

“I’m sort of the new arrival on the mural scene here,” Sage said. “I’ve done private commissions, but as far as public space, this one will be my first.”

Sage is looking forward to doing more murals when the weather warms up again. He is a long-time resident of the village, having returned after a few years in Dayton while attending Sinclair.
“I travel a lot with the band I play in, Speaking Suns — we’re all over the country all the time,” Sage said. “Yellow Springs is just a great place to hide out and be a part of a community.

“My favorite thing about this community is that it’s such an easy thing to change and mold if you choose to be an active member. I think the community responds well. I like the idea of being a part of that.” Sage’s art background is mostly sculpture and ceramics. He is also an assistant
for noted local ceramicist Justin Teilhet.

Sage has recently moved to doing Pop Art. The Pop Art movement originated in the ’50s and ’60s, pioneered by Milton Glaser, Peter Max, Roy Lichtenstein, Andy Warhol and others.

“Very bold, colorful Pop Art is where I’m at now,” Sage said. “Street art is a relatively new thing, but I’m asking myself why I haven’t done it sooner with my approach stylistically. It seems they go pretty well together.”

Among its fine lines, Sage’s recently completed mural is imbued with some symbolism, too.
“There’s a town on a cake, and a slice is missing from the cake — that’s representative of affordable housing. Piece by piece that’s going away,” Sage noted.

“A lot of my purpose here in town is to create awareness for a younger arts culture to be present, and with things like affordable housing going away, it’s a lot more difficult for that kind of community to exist. Especially for young people that are trying to work and afford to live in a culture that is creative and accepting and progressive.”

Nominations please
John Fleming would like to remind readers that the VIDA is awarded based on nominations from the public.

“You don’t have to be a self-identified artist to receive the award,” he said. “You just have to make art, be inspired in creating something that changes the atmosphere where you live or work.”

There have been eight recipients so far over about four years.

“We really want the community to nominate. Just send an e-mail to the Arts and Culture Commission.” That address is acc@vil.yellowsprings.oh.us.

Dickens can be contacted via e-mail at goldenchildartwork@gmail.com and Sage is on Instagram @dylansagemixedmediaart.

View a special photo feature on the Murals of Yellow Springs here.

One Response to “VIDA awarded to muralists of YS”