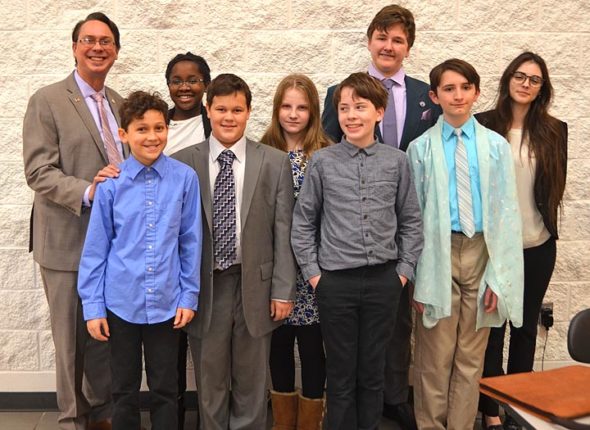 In its second year, the Yellow Springs Speech and Debate Team is small but mighty, placing well in competitions against larger schools with long-running speech and debate programs.

This year, the squad has expanded to bring in middle school students, which in competition includes sixth-graders. Senior Lily Bryan is also new. The team is planning to host its first local tournament this month, anticipating the participation of 20-some schools in the day-long event Saturday, Jan. 26, in various locations around town.

Housh, a community leader who ran for state office two years ago, describes himself as “the poster child” for speech and debate.

“I could not speak in public,” he said last week. But joining the speech and debate team as a high school senior changed that.

“I overcame my fear,” he said. Housh made it to the finals in the national tournament and went on to spend three years in the No. 1 ranked college team at Cornell University.

Jorie Sieck, now a first-year student at Stevens Institute of Technology in New Jersey, hadn’t done any public speaking until joining the local team as well.

“It’s not as difficult as I thought it was going to be,” she said last week. Back in town for winter break, Sieck came by the high school last week to help with team coaching and then served as a judge at the Beavercreek competition.

She said she was initially drawn to debate because she likes the process of “deconstructing arguments.”
Sieck said she found the benefits of being on the team more far-reaching than she anticipated.

Participation not only bolstered her confidence in public speaking, but also strengthened her writing and critical thinking skills as she began college, she said.

Jorie and Galen’s mother, Cindy Sieck, said speech and debate was new to her until last year as well, but she’s become a big supporter of the program, not only providing transportation and attending tournaments, but also serving as a volunteer judge.

A professor at Ohio State University, Sieck said she appreciates the research and writing that goes into debate preparation as well as the feedback team members get from each other and at competitions.
“It’s super encouraging to think this many kids are thinking through these issues,” she said. “I hope more kids do it.”

Elaine Fipping, a regional speech and debate organizer, is unequivocal in her enthusiasm for the program.
“This is one of the best things our kids can do,” she said in the midst of ushering competition participants to their next event round during the Beavercreek tournament.

Coach Jackie Anderson pointed out that Fipping has been involved in the Ohio Speech and Debate Association since Anderson was in high school.

It has parallels to the problem-solving model of the district’s Project-based Learning curriculum, Hatert said this week. And speech and debate also has a strong theatrical component, both Housh and Hatert noted. Relatedly, the school’s performance teacher and the teacher of a new speech and debate class, Lorrie Sparrow-Knapp was a national finalist in speech.

The program has a variety of categories in which participants can specialize. Middle schoolers focus more on the speech side, while older students choose from a range of events, with such titles as “Declamation,” “Dramatic Interpretation,” “Humorous Interpretation,” “Extemporaneous Speaking,” “Informational Speaking,” “Original Oratory,” “Lincoln-Douglas Debate,” “Policy Debate,” “Public Forum Debate” and “Congressional Debate.”

Jorie Sieck said that she and Aidan Hackett last year competed as partners in the Public Forum category, which calls for participants to research and then debate another team of two — alternatively taking both pro and con sides — on a current event.

Topics covered over the course of the year included the necessity of universal background checks, whether NAACP athletes should be considered employees and the extent of presidential powers in times of national crisis.

This year, Galen Sieck and Lily Bryan are competing in the Lincoln-Douglas category. Named for the historical matchups of 19th century presidential candidates Abraham Lincoln and Steven Douglas, the event pits participants one-on-one against a rival on a value-focused topic.

The topic at the Bevercreek Invitational was “The United States ought not to provide military aid to authoritarian regimes.”

Most of the six members of the Yellow Springs middle-school group competed in the category of Declamation, for which they memorized an approximately 10-minute speech that had previously been given in public.

Kian Barker, to whom Lily had offered confidence-building tips before the weekend meet, presented an original speech in the category of Oratory, having researched and written on a topic of his choosing — the cultural significance of comics.

While only one other competitor in that category attended the day-long Saturday event, assuring Kian either a first- or second-place finish, he said the experience was “still nerve-wracking.”
Teammate Miles Gilchrist said that his nervousness decreased as the day went on.

“The first [round] I didn’t do so good, but the second time I improved a lot,” Miles said with a smile.
Payton Horton, who was competing in her first tournament, felt good about her efforts.
“It went really well,” she said with a happy skip.

Apparently the judges agreed, as Payton finished the tournament with a fourth place in her category. Teammate Conor Anderson tied for second, also in Declamation; and Kian tied for first in Oratory.

While high schoolers Galen and Lily didn’t place in the Beavercreek tournament, they did well, coach Housh said afterward. Participants get an idea about how they’re doing by seeing against whom they’re matched in a competition’s later rounds. At the end of the day Saturday, both Galen and Lily were debating some of the region’s best finishers, Housh said.

Some teams, like powerhouse Mason, have more than 80 members, Housh said.

Mason is expected to be one of about 20 schools participating Jan. 26, when Yellow Springs hosts its first local tournament, dubbed the “Yellow Springs Fearless Forensic Festival.”

More than 300 students from across southwest and central Ohio will be coming to town for the day-long event, Housh said, and he’s hoping to get the whole village involved. A variety of volunteers are needed to make the day successful, Housh said.

The roles include: judges, who don’t require any experience (there will be a training beforehand as well as a mini-training the day of); helpers for managing the event, including concession sales; and sponsors to provide food and other support.

“This is a huge event for Yellow Springs to pull off,” Housh said, adding that anyone interested can contact him by phone at 937-776-9566 or email at brianhoush@gmail.com.

“I am happy to talk to anyone interested,” he said.

“I do hope that villagers get excited about this and come out to support it.”