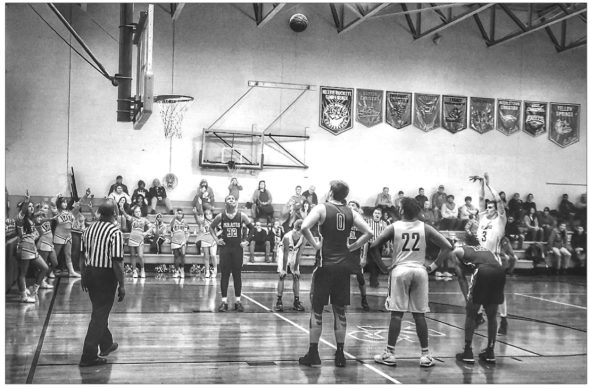 Senior Andrew Clark shoots — and makes — a free throw during the Jan. 15 home game against the West Carrollton Pirates. (Photo by Mike Knemeyer)

Last Saturday, the YSHS Bulldogs swim team defeated five other teams in the Troy Christian Invitational. With a shorthanded roster of just five girls and four boys, the team took on several conference rivals, which also were shorthanded mainly due to sickness. What made this victory more remarkable is that the team captains decided the lineup, and in many cases, swimmers were purposely placed in unfamiliar events to build experience.

The girls led the charge with a series of impressive finishes. Individually, Eden Spriggs and Natalie Galarza won the 100 free and 500 free, respectively. The 200 medley relay team of Galarza, Devyn Deal, Sara Zendlovitz and Jude Meekin and the 200 free relay team, with Spriggs, Meekin, Deal and Galarza, also placed first.

The especially shorthanded boys team had several impressive finishes. David Walker achieved clear lifetime bests in both the 200 free and 500 free, while Harper Mesure competed in his first ever 100 butterfly, which is one of the most difficult events in high school swimming.

The team, hopefully at full strength, will compete for the Metro Buckeye Conference Championships on Saturday, Feb. 2 at 3 p.m., at Trotwood-Madison High School. The Bulldog girls team looks to defend their title, which they have held for the past three years. The boys team, the largest in years, are competitive for their first ever conference title.

On Jan. 8, the McKinney School eighth–grade boys basketball team lost a home game to Dayton Christian, 46–20. The team fell behind early and could not maintain momentum to overtake their opponent.

The McKinney School eighth-grade boys basketball team beat Dayton Jefferson 34–26 on Jan. 10. The Bulldogs started slowly, with a first-quarter score of 4–4. They finished strong the last three quarters for the win.

The seventh- and eighth-grade boys lost basketball games to Middletown Christian on Jan. 17. The seventh-graders were outmanned, but played hard all four quarters, losing 45–19. The eighth-graders fell behind 8–9 in the first quarter. The Bulldogs played hard and fought valiantly to stay close, but could not overtake their opponent. The final score was 53–35.

On Jan. 25, the eighth-grade boys basketball team played Miami Valley and lost an exciting game in overtime. The Bulldogs led by two at the end of the first two quarters. Miami Valley then tied the game at the end of the fourth quarter, putting the game in overtime. The game was very physical and the Bulldogs fought courageously for four quarters, but could not overcome their turnovers, only to lose 37–33.

The YSHS Bulldogs girls basketball team won all three of their games against Middletown Christian, Stivers and Miami Valley in the last week.

The girls continued their winning streak at Stivers on Jan. 22, with Smith and Jones again leading in points, with 29–10, respectively. Smith also brought in 12 rebounds, and the Bulldogs took the game with a score of 54–45.

Back on their home turf on Jan. 26, the Bulldogs dominated Miami Valley, with Smith again leading with 25 points. She and Tyler Linkhart both took 14 rebounds, and the game ended 42–27, with YSHS victorious.

The YSHS Bulldogs girls basketball has now won five out of their last six games, with their in-conference record 6–3 and total record 9–7.

Friday, Jan. 18, saw the Bulldogs travel to Middletown to face the Eagles of Middletown Christian.

The junior varsity squad played a close game, with Muhammad leading the scoring with 11 points. Cussioli scored three field goals and a free throw to add seven points, and Phillips and Bryan added five points and four points, respectively. But the Bulldogs couldn’t quite close the gap and lost to the Eagles, 38–29.

The varsity team battled with the Eagles from start to finish. Cowen sunk a dramatic three-point basket as the clock ran out on the first quarter, but the referees ruled that the ball left his hands after the quarter ended. Despite three Bulldogs scoring in the double digits — Clark with 14, Cowen with 13 and Anderson with 11 — Yellow Springs couldn’t quite catch the Eagles, losing a close one 52–47.

On Tuesday, Jan. 22, the Yellow Springs boys headed to Xenia to face the Legacy Christian Knights. Both the junior varsity and varsity Bulldogs struggled with the Knights. Harris led the scoring for the JV squad with eight points, followed by Phillips, who added six points. But the scoring effort from the Knights was too much to overcome, and the JV Bulldogs lost 59–20. The varsity squad faced their own challenges against the Varsity Knights, and despite 20 points from top scorer Clark and 15 points from Anderson, as well as defensive efforts from Wagner, Fultz and Bryan, the Bulldogs fell to the Legacy Christian varsity team, 91–49.

Saturday, Jan. 26, brought the Miami Valley School’s Rams to the Dog Pound to face an afternoon of games versus various Bulldog teams. The varsity boys faced the varsity Rams squad in a low-scoring game that saw the Bulldogs led in scoring by Anderson, who contributed eight points. Cowen, Clark and Dimitri Wallace made up the rest of the scoring effort for the Bulldogs, but the Yellow Springs boys came up short against the Rams, losing 34–25.