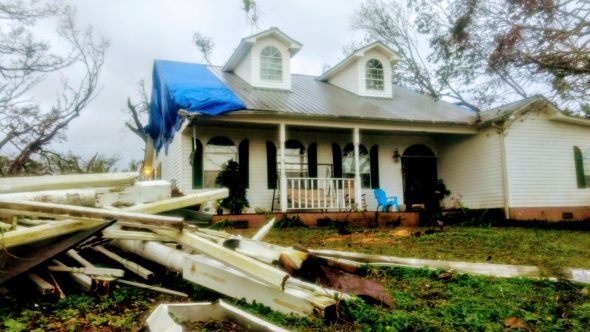 Aftermath: my parents’ front yard and the remains of part of their porch mingled with those of an unidentified boat house.

It was already dark when we started to pull into town. It started slowly — street lights showed rows of pencil-thin pine trees leaning slightly, a flag pole not quite level, a remote county building missing a few letters on its sign.

But then we rounded a corner onto another country highway where the streetlights were out. Illuminated by our headlights, things began to reveal themselves: brick walls crumbled inward, metal roofs peeled back like aluminum cans, mounds of man-made materials heaped by the road, the piles taller than me by half. Behind everything, the black outlines of defeated trees bending against the dark gray of the night sky. This was the drive to my parents’ house in Panama City, Fla., just a few days before Christmas.

On Oct. 10, Florida’s Gulf Coast was assaulted by Hurricane Michael, a Category 4 storm with winds sustained at 155 miles per hour — 2 miles per hour shy of being classified as a Category 5. This was the first time a storm of this magnitude had hit this area of Florida, where I grew up and where my family lives, within living memory.

We arrived late at my parents’ house, just in time to catch a few hours of sleep. I woke up the next morning and put on my dad’s flip flops to take my 17-year-old sister’s Pomeranian for a walk. Up and down the street were the piles of detritus that, as I would soon find out, fill every yard and line every street in Bay County. It would be a few days before I’d discover that the majority of the pile in my parents’ own front yard was composed of material from other, unknown buildings, blown away by the storm.

My family was lucky, in that their house only sustained some roof damage, and the loss of part of their front porch. Like every other house in the county that still has a roof, it’s covered with a blue tarp. It doesn’t take long being in town before that particular shade of blue just becomes part of the landscape, along with the vinyl signs nailed to every wooden post, advertising debris removal, roof repair and help with filing insurance claims.

Driving from my parents’ country house into town in an attempt to find wrapping paper at Walmart, it struck me that the youngest pine trees were, on the whole, still standing, while the older, larger ones were either gone or snapped, bowing at the waist. A metaphor for the resilience of youth immediately suggested itself to me — and I was repulsed by its intrusion. I was trying to find meaning, purpose in this chaos, and there wasn’t any to be found.

I guess that’s human, to try and find the meaning in the things that hurt us. Up and down Highway 77 and 23rd street, two of Panama City’s main drags, there were LED signs in the parking lots of destroyed businesses that read “#850strong.” (850 is Bay County’s area code.) This open defiance seems to suggest that the devastation will bring everything back better in the end. Some folks are even trying to find the humor in the situation — one destroyed business had spray-painted onto the one brick wall that was left standing “Closed for remodeling.”

I don’t begrudge these folks for doing what they can to try and take back control in the face of something nobody could control. How could I? This isn’t really my home anymore, not for a decade or more, and it’s not for me to say how a community should try and lift itself up. But the devastation is the kind that will take years, maybe decades, to rebuild from. Our federal government, shocking no one, is doing the bare minimum to help. Thousands remain homeless. Many have left, and most likely won’t ever come back.

I’m writing this on Christmas Eve, on my parents’ couch, next to the dog, while my daughter and her cousin take turns being gently launched from a half-deflated air mattress by my brother-in-law. My family is getting ready to take a trip out to Panama City Beach — which, surprisingly, took far less damage than some of the more inland communities — for some last-minute Christmas shopping. While my mother and my teenage sister argue over which stores are closed and which have reopened after the storm, I’m trying to find a way to write this column in a way that ends with hope.

Here’s the best I can do: everybody keeps on going. People have decorated their wasted yards with Christmas lights, and they take walks with their loved ones down the rubble-lined streets. Kids still play on treeless playgrounds. My dad makes a little time most days to take a chainsaw to the massive oak tree that still lies in the front yard. Bit by bit, he — and everyone else — is chopping up the rubble, cleaning it up and moving on.