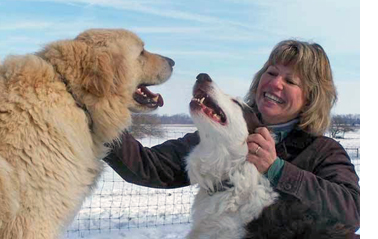 Diane L. Wilson passed away unexpectedly on Jan. 4, 2019, at age 58, from a stroke caused by an aneurysm. Her husband, Jak Campbell, was with her.

Diane was born Aug. 19, 1960, in Bellfontaine, Ohio, to Barbara and David Wilson. David was a veterinarian; Diane grew up in a home in which animals were part of the family.

Diane’s life was informed by her enormous heart, compassion and unselfish kindness for family, friends and animals. Her passion for animals became her vocation; she was a trusted caregiver to many animals in the area and also a friend and mentor to their humans. In 2010, Diane became co-owner, with her close friend Lynn Caldwell, of Miami Valley Equine and Small Animal Acupressure.

Jak and Diane found each other in 1997. They married in 2004, standing by the river on their property in Clifton, with their dogs at their feet. Their home was shared with many rescues. Together they created a life defined by great love, compassion for others, much laughter and a daily recognition of the profound gift of “rescuing each other.”

Diane is reunited in death with her brother Dale, her father, David, and the countless creatures that were mended and tended to by this family of animal lovers. Mourning the deep loss of her departure is her beloved mother, Barbara, and brother Doug; nieces and nephews; treasured friends and clients; and most of all, her devoted husband and soulmate forever, Jak; and their rescue family of dogs, Dave and Buster; cats, Catherine and Simba; and Diane’s horse, Little Abe.

A giver until the end, Diane was an organ donor. A celebration of Diane’s life will be held in August at their home in Clifton. Condolences may be sent to Jak Campbell, P.O. Box 7, Clifton, OH 45316. Support in Diane’s memory of an animal rescue of your choice is greatly appreciated.