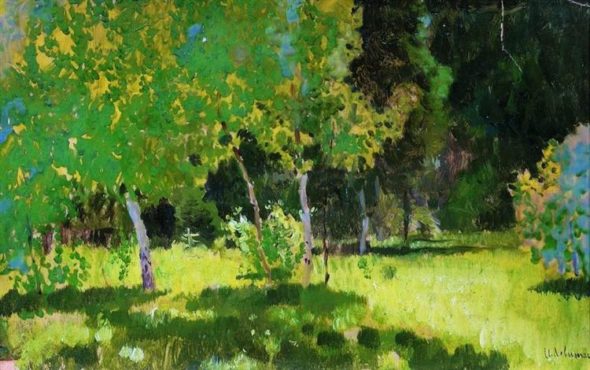 "A Garden," Isaac Levitan. (Via Wikiart.org)

A reader at the recent Winter Solstice Poetry Reading observed that friendship with a poet is hazardous — one is liable to show up in a poem! In the case of friends and poets Anne Randolph and Mary Donahoe, poetry was a natural part of the women’s bond. Friends for more than a decade, the two villagers met regularly in recent years at Randolph’s house for “Poetry and Tea,” each bringing original poems for the other to review and critique.

“We always improved each other’s poems,” Randolph told me when we spoke last week. She credited her friend with a sharp eye and gentle touch. “Mary was so supportive — more than anyone.”

When Donahoe died in early November, Randolph immediately wrote a poem. The poems continue to flow, each recalling different aspects of the women’s friendship. “Mary’s Garden,” printed below, is one of them. And alongside it is a poem written by Mary Donahoe last winter, “Carolina Wren.” Both poems deal poignantly, even rawly, with memory, grief and loss. 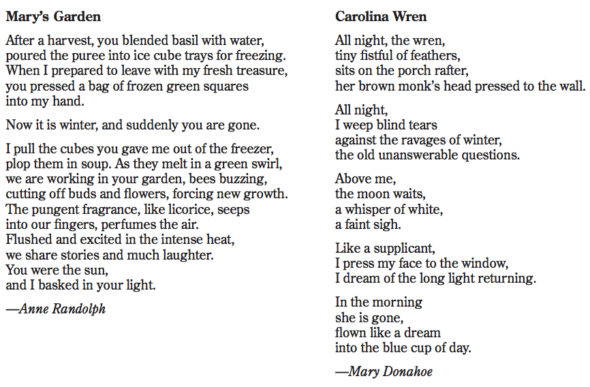 At this time of year, who doesn’t wish, at least a little, for the heat and light of summer that “Mary’s Garden” so sensually evokes? And who hasn’t mourned the loss of someone who seemed to be, as Randolph says with moving simplicity, “the sun”? A poem like Randolph’s is love made tangible, I think.

Donahoe’s poem also expresses a longing for light. It is a harrowing poem to read in winter, when the feelings it voices may already be surfacing in us. Yet it’s a comforting poem, too. In writing the poem, Donahoe offers us something like the wren’s gift of solidarity. Something small, perhaps, and rather mysterious. But isn’t such a gift so often enough?

ANNE RANDOLPH has been writing poems for many years. She is inspired by “the myriad ways one can connect and interact with nature.” Her first chapbook, “Growing in Light,” was published this year by Presa Press; it is available for purchase locally at Epic Book Shop, Sam & Eddie’s Open Books and the Glen Helen Nature Shop.

MARY DONAHOE was a theater professor, retired from Wright State University, and a nationally published poet. She started writing poems “from the very day she started to write, less to get published … than to honor and give meaning to an inner world so different from the everyday,” according to her husband, Rick, in a recent email. One of her poems is included in the anthology “Sisters of the Earth: Women’s Prose and Poetry About Nature,” edited by Lorraine Anderson.

To submit to “First Lines: A Poetry Column,” please send original, previously unpublished poems of 25 lines or fewer to Audrey Hackett at ahackett@ysnews.com. Poems are accepted on a rolling basis for consideration in the News’ monthly poetry column. For full submission guidelines, see ysnews.com, search “poetry.”