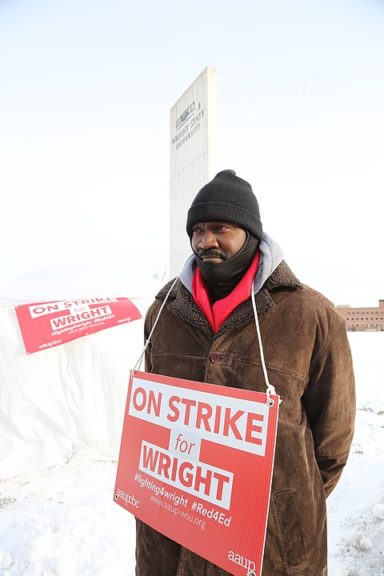 Yellow Springs resident Opolot Okia, a professor of African history, said the administration is not negotiating in good faith with faculty. (Photo by Gary McBride)

As of 8 a.m., Jan. 22, the Wright State University faculty represented by the American Association of University Professors, or AAUP, went on strike as planned, picketing at the campus entrances, despite the 17 degrees Fahrenheit temperature and brisk wind.

Dozens of faculty and supporters carried signs, chanted slogans and waved to the drivers of passing cars honking in solidarity.

A substantial number of Yellow Springs residents teach, study or work at the beleaguered university.

Braving the weather in support of the strike was Opolot Okia, who has lived in the village for almost 10 years, and has been a professor of African history at WSU for nine-and-a-half years.

Okia said the strike is in the interests of ensuring students get a quality education.

“The students are number one, always,” said Okia while other picketers were chanting a slogan. “On the other hand, after the students, we need professors here for the university to function. The administration simply isn’t seeing it that way, so that’s the issue here.”

Not all faculty or teaching assistants are part of the same union or participating in the strike, so classes have not been canceled.

Yellow Springs resident Steven Bognar, a former WSU instructor, was picketing to show his support for the current faculty. He was part of the faculty for five years and his partner Julia Reichert was a professor for 28 years in the Department of Theater, Dance and Motion Pictures. They are prominent documentary filmmakers.

“I’m very proud to have been on the faculty, and proud to support my former colleagues with this strike,” Bognar said. “The Wright State faculty have had a raw deal since this financial crisis began, a crisis not of their own making, and there’s absolutely no reason why the university can’t continue to negotiate.”

The union contends that the university administration’s “last, best offer” of Friday, Jan. 4, was imposed without negotiation.

In dispute is the administration’s three-year offer that includes, among other measures, no raises, reduced health care benefits with higher premiums, the elimination of any future negotiations over health care, an erosion of tenure protections and new furlough rules.

“They want to increase the number of classes we have to teach,” added Okia. “Also, they’re taking away any money that we might get to do research, but on the other hand they’ve increased the number of administrators. They didn’t make any significant cuts in the athletic department. They’re not bargaining in good faith, that’s part of the problem.”

The board says the measures are necessary as the university recovers from a loss over several years of more than $100 million in reserves.

“We love this school,” said Bognar. “It’s heartbreaking that it’s come to this, and that the administration is resorting to these unfair tactics.”