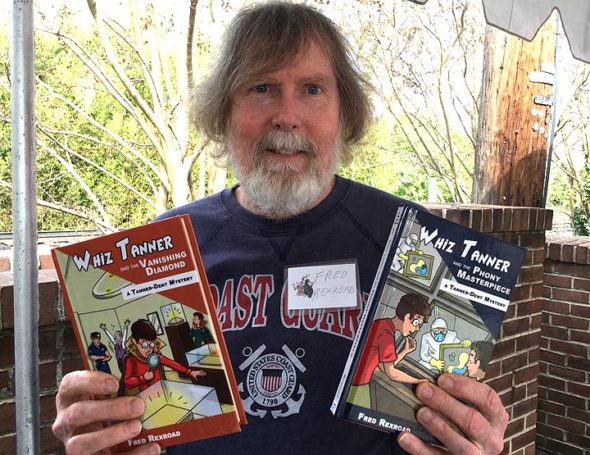 Jasper Springs, the imaginary setting for Fred Rexroad’s mystery book series for children, looks a lot like Yellow Springs. There’s a college campus and a bike path. There’s Pepperman’s Dairy right outside of town. There’s Clifton Gorge, Livermore Street and Limestone Street. Most importantly, Jasper Springs is a small town where the protagonists, sixth-graders Whiz Tanner and Joey Dent, can ride their bikes wherever they need to go.

“There’s a whole lot of Yellow Springs in the books,” Rexroad said in an interview this week. Jasper Springs is a combination of places, he said, but mainly he was inspired by Yellow Springs. “I have fond memories.”

Villagers who know Rexroad and his wife, Susan, from the 16 years Rexroad lived in the village, might be surprised to hear that in recent years he’s been passionate about writing. They might remember him as an expert in logistics for Wright-Patterson Air Force Base, who moved to the Netherlands in 2002 to perform the same function for NATO. Three years later the family moved back to the states to Washington, D.C., where Rexroad took a job doing the same work for the Joint Chiefs of Staff until his retirement two years ago.

But there’s a common theme in writing his mystery books and specializing in logistics, Rexroad said.

“The idea of solving problems is the same,” he said. “You’re asking, ‘What does the data mean? What does it point to?’”

For the past several years, Rexroad has written about one book a year in his Tanner-Dent mystery series. The books have garnered positive reviews from the publishing industry giant Kirkus Reviews, which stated, “Another highly entertaining Tanner-Dent investigation,” for “Whiz Tanner and the Secret Tunnel” and “A cozy, entertaining kids’ mystery. The finale offers a satisfying payoff” for “Whiz Tanner and the Vanishing Diamond.”

The books take place in the modern world — there are cell phones! — but the world is an innocent one, in which two boys can buzz around town on their bikes solving mysteries. The brains of the duo is Whiz Tanner, a red-haired, bespeckled boy whose teachers give him advanced math assignments to keep him engaged, yet who needs help from Joey when communicating with his peers. Whiz could be described as someone on the autism spectrum, Rexroad said, although he doesn’t label him as such in the book. But Whiz is a boy with both great gifts and a flaw or two, and Rexroad describes Whiz and Joey as having been partly inspired by his own sons, Ian and Justin.

“And there’s probably me in there as well,” he said.

While each book highlights the boys solving a mystery, the books also each have a unique learning focus. For instance, in “Whiz Tanner and the Vanishing Diamond,” the kids study the craft of magic while performing with a professional magician. And another Tanner book features the Fibonacci Sequence, a famous mathematical formula in which each number is the sum of the two numbers preceding it.

Rexroad enjoys researching these topics and hopes his readers enjoy reading about them.

“It helps to keep my interest, and I hope sparks the kids’ interest,” he said.

Rexroad is gratified that his books are filling a need. While years ago, when the “Hardy Boys” series was popular, elementary school-age boys were readers; now boys read much less. When Rexroad attends conferences for children’s book writers, he hears over and over the need for books with boy protagonists. Girls are far more likely to read than are boys, Rexroad said, and consequently there’s a dearth of books that feature boys as main characters.

Rexroad makes clear that he didn’t start out writing his books solely to reach an underserved demographic. Rather, he writes them because he enjoys writing them, and having once been a boy himself, and being the father of boys, he naturally chose male protagonists. Still, he hopes his series helps fill a void of books that appeal to boys.

“It’s nice to be feeding this niche,” he said.

Rexroad came late to writing. Born at Wright-Patterson Air Force Base Hospital in Fairborn, he grew up in Fairborn until his father, who served in the Air Force, was transferred to Florida when Rexroad was eight. But the family returned to Fairborn when Rexroad was a senior in high school. After graduating, he enlisted in the Coast Guard, where he served for four years. After that, he attended Wright State University, obtaining first a bachelors and then a masters in management science, now called operations research. Then he began his 25-year career with the Air Force. Having enjoyed visiting Yellow Springs when he was growing up, Rexroad decided to live here when he began working at Wright-Patterson.

Rexroad’s first experience with writing came when he was in ninth grade, after an accident landed him in the hospital. After his mother found a “Brains Benton” mystery book in the hospital gift shop, she gave it to him, and he began reading the series. He read all of the six Benton books he could find, then searched for the seventh, but to no avail, because it hadn’t been written. He decided to write it himself.

So he started writing the book, but life intervened and he finished it 30 years later. But in that time he read his book to his sons, and discovered they liked his writing. So he kept going, eventually deciding to veer away from the Brains Benton brand and invent characters of his own. Hence the beginning of the Tanner-Dent mystery series.

Realizing that he needed to learn more about writing, about 10 years ago Rexroad began taking classes. He also regularly attends writing conferences, where he deepens his study of the writing craft.

Having finished five books in the Tanner-Dent series, Rexroad is now ending a sixth. While he has enjoyed writing the children’s books, he’s now leaning toward adult fiction, and is working on several thrillers, along with short stories. Most days he walks to a bookstore or a coffee shop near his home in Vienna, Va., and writes there for an hour. Then he returns home, and writes for an hour or so more.

Along with learning the craft of writing, Rexroad has learned a great deal about publishing. The Tanner-Dent series is self-published, and he’s used self-publishing platforms such as Kindle Direct Publishing and Lulu. He also hired a professional editor and an illustrator for his books.

Self-publishing offers a way to get books published quickly, he said, but it also comes with limitations, as self-published books are rarely picked up by mainstream publishing houses. So with his thrillers, he’s taking the more mainstream route of first seeking an agent, then a traditional publisher. While he doesn’t have an agent yet, he is trying.

“If you really want to publish a book, my advice is to work that avenue [mainstream publishing] until you’re exhausted first. Then you can go to self-publishing, which is quick and easy, but it locks you in,” he said.

Rexroad is coming soon to the end of the Tanner-Dent series, but is excited to expand into adult thrillers. He’ll keep walking to the coffee shop each day to write. And, regarding the imaginary world he’s created in Jasper Springs, he’s open to possibilities.

“If anyone wants to make a movie out of the books, I’m up for it,” he said.

To find out more about Fred Rexroad’s books or to order them, go to http://www.WhizTanner.com.