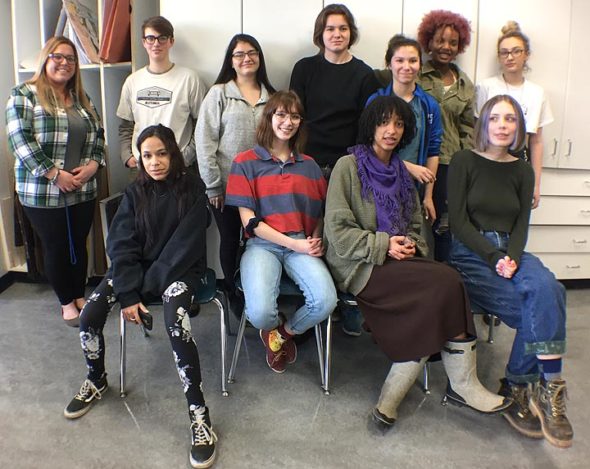 Sneakers with a message at YSHS

During last year’s NFL season, players wore shoes decorated to promote each player’s favorite charity, bringing attention to the causes of cancer prevention, mental health awareness, clean water initiatives in Africa, and the education of low income children, among others. Hundreds of players participated, from teams that included the Cleveland Browns, the New England Patriots and the New York Jets.

Yellow Springs art teacher Emily Cormier, a former high school athlete herself, knows a good idea when she sees one. In response to the NFL project, she created “If You Were In My Shoes,” an effort in which YSHS advanced art students decorated the sneakers of YSHS basketball players to show the athletes’ support for their favorite causes.

The inspiration for the project was YSHS students’ own sense of individuality and self-expression, Cormier said.

“I love how here in Yellow Springs students’ individual voices are represented in what they wear,” she said in a recent interview.

Self-expression is critical and clothing is a great vehicle for expressing oneself, she believes. And the project is also an excellent reason to create art.
For YSHS Interim Principal Jack Hatert, the project is important because it allows athletes to promote social causes they believe in.

“We want our students to be change agents,” he said. “This project allows our athletes to do that, just by putting on these shoes and playing a game they enjoy in front of a gym full of fans.”

This basketball season fans will see a variety of causes promoted by “If You Were In My Shoes.” Andrew Clark requested a breast cancer theme from YSHS senior artist Jude Meekin, who painted a red breast cancer symbol on the front of Clark’s shoes and a white-to-magenta gradient on the side of the footwear. Meekin also designed shoes for Izzy Ellis that showcase inspirational sayings such as “Hate cannot drive out hate, only love can do that” from Dr. Martin Luther King, Jr.; “There is no limit to what we as women can accomplish” from Michelle Obama; and “Love is Love” to support the LGBTQ community.

The shoes of YSHS ninth-grader Aaliyah Longshaw display various Black Lives Matter themes, including the image of a raised black fist and the slogan,“Hands up, don’t shoot!”

“It really shows something about you, so people can see what you believe in,” Longshaw said.

Symbols of women and gender equality decorate the feet of Angie Smith, while Trey Anderson’s shoes will urge fans to “Save the Polar Bears.” And several basketball players chose themes related to climate change.

“First and foremost, our student athletes, their voice and opinions matter,” said YSHS Athletic Director Nate Baker in support of the project. “We are glad to come alongside them and give them a platform to express their opinions.”

The idea for the project came to Cormier, a first-year YSHS teacher, from the Vans Custom Culture Shoe Customization Contest, in which high school students decorated shoes — based on themes selected by the company — to compete for scholarship money. Her desire to pursue such a project coalesced during a project-based learning, or PBL, training last summer.

Cormier first reached out to Principal Hatert and Athletic Director Baker, after which the three worked to get the project off the ground. They contacted representatives of BSN Sports in Cincinnati, the school’s athletic equipment provider, to ask them to contact Nike, due to that company’s support of controversial NFL player Colin Kaepernick, asking for a donation of shoes. The company not only agreed, but offered a matching donation for every pair of shoes purchased. Nike ended up donating 11 pairs of shoes and YSHS paid for an additional 11 pairs, enough for both the girls’ and boys’ basketball teams.

Student artists involved in the project were enthusiastic.

“I’ve always really liked the idea of painting where you are not supposed to paint, such as on clothing,” YSHS Senior Jude Meekin said. She feels the project opened doors for her regarding the possibilities of art.

Junior Sumayah Chappelle, also in the advanced art class, enjoys fashion and the aesthetics of clothing, so she especially appreciated making art to be worn, using clothing as a platform for student creativity as well as athletes’ support for good causes. She created the decorations for the shoes of Haneefah Jones, a Muslim African-American student who wanted to express different aspects of her life. To do so, Chappelle and Jones designed an empowerment theme that incorporates both Spiderman and a woman in a hijab, along with the words “Bam” and “Boom.” 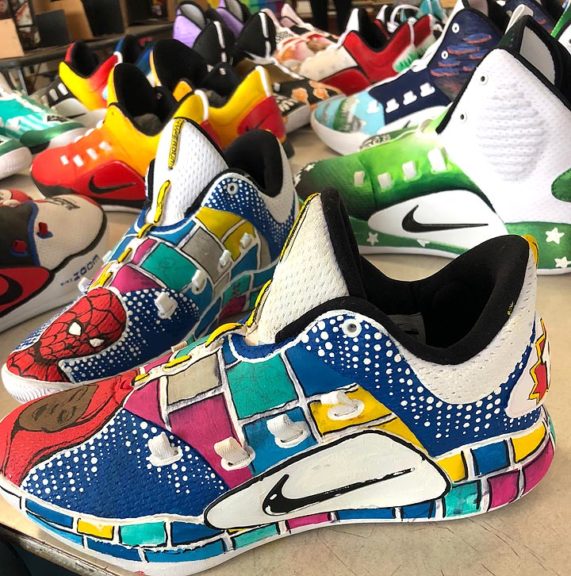 Other benefits of the project include that the art students tackled a difficult project, Cormier said, because it’s not easy to collaborate with a client to convey in a design that client’s chosen message.

“I think that my students found a new confidence in themselves as artists completing a project that was by no means easy,” she said.

Hatert is making sure that the project lives on at the school, having foam boards created with images from the project permanently displayed at the high school.

To Hatert, the “If You Were In My Shoes” project is a perfect example of students doing work that reflects the values of students and the community. And Nike executives, who received photos of the decorated sneakers, were “blown away” by the project, he said.

“How cool is it that our students were a topic for their discussion?” Hatert said.

*Steiger is a local artist and writer.