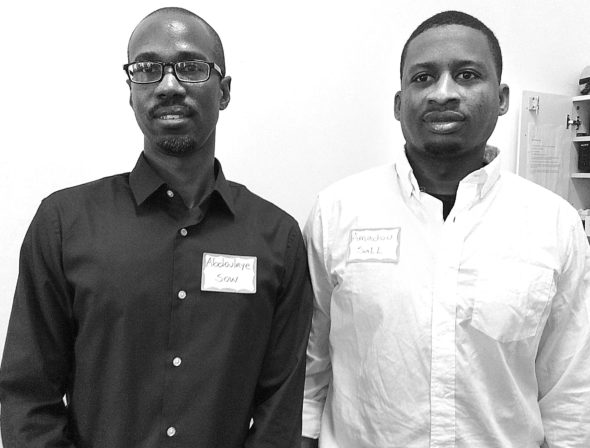 The United States President has declared an immigration crisis at the U.S.–Mexico border, focusing public attention there, while at the same time a crisis in our own backyard goes unseen by many Ohioans.

“It is our border,” villager Pat Dewees said of Ohio in discussing a recent uptick in deportations of black Mauritanian nationals who have been living here for 10, 20, even 30 years, according to local advocates.

Many came to the U.S. from the northwest African nation in response to a civil war, ethnic cleansing and other human rights abuses, including enslavement. More recently, in 2011, the Arab-minority government denaturalized black Mauritanians, stripping them of their citizenship.

Advocates assert that returning black Mauritanian immigrants to the land of their birth is sending them to likely imprisonment, torture and even death.

An interfaith gathering, hosted by the  Yellow Springs Friends (Quaker) Meeting (of which this reporter is a member), met with advocates and a representative of the Mauritanian community in January at Rockford Chapel on the Antioch College campus. Two members of the Mauritanian community returned to town this past Sunday to speak with the Unitarian Universalist Fellowship.

Their situation has particular local relevance in that Ohio reportedly has the largest Mauritanian population — estimated at up to 5,000 — of any state in the country, with the majority living in Columbus, Fairfield and Cincinnati.

“They are our neighbors,”  Dewees said at the Rockford gathering. “And they right now are fearful and struggling and targeted.”

Attorney Katie Kersh, of Dayton-based ABLE legal services, has been working with some of the local deportation cases.

Kersh described the deportations as not only “very unjust,” but also “frankly racist.”

She noted that the immigrants, who came to the U.S. seeking asylum, have become “fully integrated” into their Ohio communities.

Their legal instability stems from the fact that their initial requests for asylum were denied upon arrival in the U.S.

“They were ordered deported, but the government chose not to, allowing these people to check in each year with ICE.”

That remained the status quo until Donald Trump became president.

Kersh explained that when Mauritanian nationals then went to their annual ICE check-in, they were unexpectedly detained.

Some were deported, while some continue to be detained with appeals pending. Some, seeing the situation, have sold their homes and businesses and fled to Canada, while others have gone into hiding.

“They’re fighting an uphill legal battle,” Kersh said, due to the original asylum denials. “The legal options are extremely limited.”

Abdoulaye Sow, a U.S. citizen and Mauritanian spokesman who lives in Fairfield, said his community feels helpless and unseen.

“We don’t have a voice,” he said last month.

As a child, he witnessed prevalent violence against black Mauritanians.

As an adult, he is working internationally against modern-day slavery. While officially illegal in country of 3.5 million people, slavery still claims 15 to 20 percent — mostly women and children — of the population, Sow said.

“It’s very complicated,” he said. “They think they have no right to be free.”

But the deportations continue. And it makes no sense to Kersh and other advocates.

The country’s record “is bad enough to cut trade, but we’re still sending people back there,” she said.

In fact, advocates report that the government tried to deport four Mauritanians on private aircraft in the midst of the recent federal government shutdown.

“Clearly this is happening in the shadows,” Kersh said, noting that few Ohioans are aware of the situation.

Local resident Neal Crandall affirmed that truth for himself.

“I feel like I pay attention to this kind of thing, and I had no idea,” he said.

The Mauritanian immigrant situation is dire enough that Democratic legislators, including U.S. Sen. Sherrod Brown, penned a letter to Homeland Security and ICE last fall urging agents to stop detaining and deporting Mauritanian nationals as “they will likely be denied basic human rights and possibly persecuted and enslaved.”

Kersh and other advocates suggest following up with lawmakers, seeking action through phone calls, letters and emails.

“Waiting for ICE to be more compassionate isn’t going to happen,” she said.

Sow suggests that anyone wanting to learn more about the situation in Mauritania can watch a 20-minute CNN report titled “Slavery’s Last Stronghold,” which has been posted on YouTube.

In the meantime, the local interfaith group is exploring ways to support Mauritanians and end their deportation.

Dewees noted that having Ohioans lead the efforts makes sense, as the state is home to so many Mauritanian immigrants.

“They are our neighbors,” she repeated.