In the Feb. 21 issue of the News, a name was inadvertently omitted from the obituary of Virginia D. Blakelock. The corrected sentence should read: She was preceded in death by her husband, Col. John H. Blakelock, her parents, Gen. John W. and Gladys Whipple Davis; a brother, John W. Davis, Jr.; and by her first, infant granddaughter, Emily Jane Blakelock. 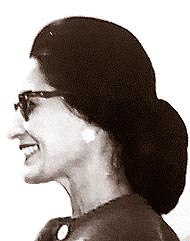 Virginia was born in 1928 in Honolulu, Hawaii, where her father commanded a coastal artillery defense unit, so they moved often in the decade leading up to WWII. She had vivid memories of Panama, ranging from its natural beauty and canal, to a housekeeper’s finding a scorpion in the bed, stepping on it and drawing a cross on Virginia’s forehead with its guts to protect her. Wherever she lived, she engaged with open wonder, respect and appreciation of diverse cultural norms. Others responded to and shared with her; she conversed well with new acquaintances in any situation, the cultivated gift of an otherwise private person, in generous service to her husband’s officer career.

Some of her fondest memories were of Maine. She loved to kayak in the harbor, but on one calm day ventured too far, and through the clear waters saw the iron pincushions of mines beneath her. She had to be rescued by the Coast Guard, and received a stern scolding from her father, not for the first time.

In 1949, she met and eloped with John H. Blakelock, a lieutenant in the “Army” Air Force, returned from Okinawa, where he had been a B-29 engine mechanic. He was attending Texas A&M at the time, and he, too, had military parents. As they began creating a family, she followed him to Boston and MIT grad school, where their second child was born. Eventually, they wound up in Fairborn, where he attained a second master’s at the AFIT.  Now caring for three children, and running a household on military pay, Virginia also edited and typed John’s book, “The Automatic Control of Aircraft and Missiles,” a pioneering aviation textbook.

In a tiny house in Page Manor, she nurtured five children, often alone, while her husband piloted C-47s, ferrying military personages between WPAFB and Washington, D.C. Grieving Kennedy’s assassination, she observed the Oswald shooting and the somber ceremonies on a small black and white television beside the “hide-a-bed” where her two sons slept. Her forsythia and vegetable garden were ripped up to install a cold war era bomb shelter, but she insisted that a playground occupy the land above it, with an enormous sandbox, tall swings and a 12-foot slide.

When her maternal Grandmother Whipple died, Virginia spent her small inheritance on a Dodge Travco motorhome, beginning a tradition of road-trip vacations through the switch-backed slopes of West Virginia to Florida, where her parents had retired. In 1964, she finally got her dream house: a split-level a few blocks from Shaw Elementary School in what is now Beavercreek, with another bomb shelter installed, but with more room for her family. In less than a year, however, State Department orders came to uproot them all for a move to Karachi, Pakistan.

Her now-lieutenant colonel spouse would create the Pakistani Air Force College of Aeronautical Engineering, and she would entertain dignitaries and troops. When, within a few months, war broke out with India, she refused to evacuate. Through nightly blackouts, their half-duplex in the western hills overlooking the city and the bay of Clifton offered a bird’s-eye vantage of anti-aircraft munitions peppering the sky, and occasional bombs in the distance wreaking damage on industrial areas. Virginia supplied her children with an enviable mail-ordered library of books on nature, history, art and literature, establishing reading nooks in closed, lighted closets for those nights, and instilling strong reading habits in her children.

She organized family weekends on a barrier island beach on the Arabian Sea two hours away, often inviting her husband’s students for picnics and evenings lit only by the bonfire and kerosene lamps, to watch green sea turtles excavate holes for egg-laying. Virginia shared her reverence for nature with each daughter and son. In 1967, she instigated family vacations in Bangkok, Thailand, planning family canal rides through jungle villages on stilts and touring sacred temples.

Moving closer to the airport and the brand-new Karachi American School allowed her children to explore the desert just beyond the property wall, and the family to enjoy an enormous veranda where 16mm films could be shown, flickering images of Gemini astronauts tethered above the marbled blue earth. She designed, raised funds for and oversaw the construction of two more playgrounds; at the new KAS there were cast concrete and terrazzo climbing toys, while similar delights marked the new Karachi orphanage play area.

Her new home accommodated dozens of guests with its sunken living room, grand spiral staircase and terrazzo floors. She especially loved her spacious garden, planting it with frangipani, papaya and lantana. She also liked to go marketing incognito in a hijab and traditional shalwar kameez, accompanying the wives of household employees, leaving most of the talking to them, but commanding enough Urdu to bargain well. She amassed a splendid collection of the painted wood work and embroidered textiles created by the women of the Sind desert.

With Bhutto’s accession to power in 1969, the family returned to WPAFB. After two years in Beavercreek, Virginia determined that Yellow Springs offered an environment in which her family would thrive, and she finished raising her family in the former Hardman home on US 68 North. Virginia supplemented their income by typing papers and books for professors at Wright State and Antioch on an IBM Selectric with a primitive computer that saved texts on large magnetic cards. She also did precision clerical and editing work for her husband’s highly technical engineering dissertation.

When her children began leaving home, she enrolled at Wright State University. She completed a BA degree — begun at Smith College in the ’40s, where she’d studied French — with a 4.0 GPA. Only then middle-aged, she applied for an assistantship to pursue an MA in history with the intention of becoming a teacher, but was passed over in favor of younger students.

When her husband retired, they combined and fulfilled two dreams: his of a pool for swimming laps, and hers of a greenhouse. In an addition to the house, a long, narrow pool stretched beneath stepped shelving, where pots of bougainvillea cascaded above. Virginia was always taking in cats and dogs, and even raised a tiny raccoon whose mother had been killed on Route 68.

As soon as personal computers came out, she bought the newest and fastest, and supplied them to her grandchildren, along with educational software. She became editor and publisher of The Hobby Greenhouse, an international gardening forum. Virginia also became very interested in genealogy, delving deeply and documenting both Davis and Blakelock roots; for years, she networked globally with genealogy software developers, helping them beta test and improve their products.

She loved monarch butterflies, and grew a variety of milkweed plants to attract them, delighting in showing visitors their turquoise, jeweled chrysalises dangling from the siding of her home.

Stricken with colo-rectal cancer in 2001, Virginia persevered through the surgery and chemotherapy and radiation treatments, and was thrilled when her hair returned and she could finally put it in her trademark bun again.

When her husband became bedridden, she cared for him at home intensively for the last two years of his life. After his death in 2015, she soldiered on, keeping busy tending her yard and garden, now on Davis Street behind the YS Library. Scar tissue from cancer-related surgery caused debilitating pain for her on a regular basis, and eventually led to her hospitalization and further surgery this past fall, with subsequent mishaps and memory loss preventing her from ever returning home.

Virginia D. Blakelock’s legacy lives on in her children’s and grandchildren’s love and extended studies of the arts, science, animals, engineering, and the natural and cultural wonders of the world.

Interment and a private family service will be at Glen Forest Cemetery on February 22. Condolences to the family can be left at http://www.jacksonlytle.com.