For those who don’t know much about the life of Wheeling Gaunt, the Yellow Springs man who bought his own freedom from slavery and for whom Gaunt Park is named, there’s a handy resource out there — and it was written by Mills Lawn’s 2017–18 first-grade class.

This week, these students — along with first-grade teacher Mikasa Simms, who spearheaded the book’s creation — will be awarded the inaugural Wheeling Gaunt Community Service Award for last year’s creation of “Wheeling Gaunt’s ABCs,” a picture book detailing key points in the life of the village’s famed philanthropist. The award is to be presented by the Wheeling Gaunt Sculpture Project committee on Thursday, Feb. 28,  at 6:30 p.m. in Room 113 of McGregor Hall on the campus of Antioch College, at the committee’s “Wheeling Gaunt’s Onyx Overview” event.

Following the alphabet, “Wheeling Gaunt’s ABCs” details how Gaunt, who was born enslaved in Kentucky, bought his freedom and settled in Yellow Springs. It tells of how a lifetime of hard work and real estate investment meant that, by the time Gaunt died in 1894, he had amassed a large fortune and a good deal of land, most of which he donated to Wilberforce University and Yellow Springs. And the book informs readers that Gaunt donated nine acres of farm land to the Village with the instruction that any rent money collected from the farming of the land should be used to distribute flour to the village’s widows. Though the land is now Gaunt Park, the Village still distributes flour and sugar to the village’s widows and widowers every winter. 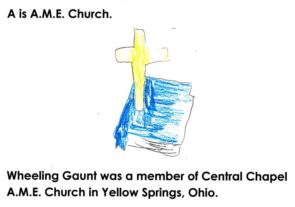 A is For “AME Church”; from the book, “Wheeling Gaunt’s ABCs”

Simms, who grew up near Gaunt Park, said in a press release this week that the genesis for the project was her own interest in Gaunt’s life.

“I wanted to know more about [him],” she said. “My father is a widower and receives ten pounds of flour and sugar at Christmas time from the Village.”

Simms invited local historian and Antioch College Associate Professor of History Dr. Kevin McGruder to introduce her class to Wheeling Gaunt before they began work on the book. He talked to the then-first-graders about Gaunt’s life, and led the class on a walk to Gaunt’s former house on Walnut Street.

“They had a lot of questions,” said McGruder in an interview this week. “I think it made him real for them by being able to see that he lived so near where their school is.” 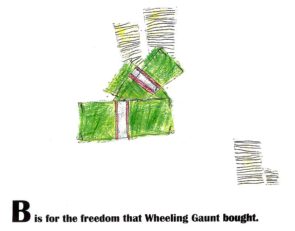 B is for “Bought”; from the book, “Wheeling Gaunt’s ABCs”

The book was printed and sold by the students at their PBL Exhibition Night last year; the students raised $127 with the books, and donated the funds to theWheeling Gaunt Sculpture Project. The committee for the Sculpture Project is currently working to erect a bronze sculpture of Gaunt in the village.

“We realized that part of the focus of Wheeling Gaunt’s life was on not what you have, but on what you share,” she said. “Having an award for people like Simms and her first-grade class, who did so much for the community, felt like an appropriate thing to do, based on the projects that we’re working on.” 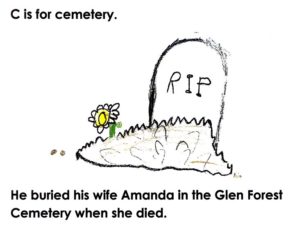 C is for “Cemetery”; from the book, “Wheeling Gaunt’s ABCs”

The Sculpture Project committee not only intends to honor the creation of the book, but has planned to have the book professionally reprinted. It will be given as a gift to those who donate to the Sculpture Project, and be made available for sale in the village, with proceeds to benefit the project.

“The intergenerational aspect of the kids’ book is important — how do you reach across generations to learn and teach about this man?” said Durgans. “If you’re growing up in Yellow Springs, this is your heritage. Everyone should know about Gaunt.”

Along with honoring the work of Simms and her students, the evening’s events will also include a reflection on Gaunt’s life by Steven Deal, who lives in Gaunt’s former Walnut Street home with his wife, Nancy Mellon. Artist Brian Maughan, who was commissioned by the project’s committee to create the sculpture, will discuss his work thus far, and Durgans and YS Arts Council President Jerome Borchers will speak about the Sculpture Project’s history and the work left to be accomplished. The evening will wrap up with a flour-and-sugar-cookie reception, with cookies made from a 19th century recipe unearthed by the YS Historical Society. 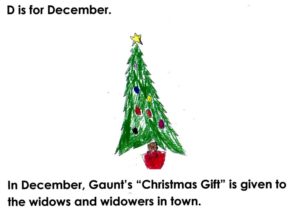 D is for “December”; from the book, “Wheeling Gaunt’s ABCs”

“Jean Payne from YS Historical Society found the recipe from 1863 — right around Wheeling Gaunt’s time,” said Durgans.  “Volunteers from the McKee Association and the Yellow Springs Historical Society are baking the cookies for this reception. It’s kind of awesome. I’m not a natural baker, so I’m saying, ‘More power to you. Hallelujah!’”

Folks who aren’t able to attend Thursday night’s event needn’t worry —  this is only one of the Sculpture Project committee’s many anticipated events that will use Wheeling Gaunt and the project as its focal point to broaden community discourse, both before and after the completion of the sculpture. One is the future creation of a mural, recently funded by the Ohio Arts Council. Another is a soon-to-be-released podcast created by Steve McQueen, who interviewed participants in last year’s “Wheeling Gaunt’s Yellow Springs” walking tour, initiated by The 365 Project’s Young People of Color. The tour, part of the “Blacks in Yellow Springs” series of walking tours, features local middle- and high-schoolers, who are trained to lead the tours. Those tours will continue this summer and spring for those who want to learn not only about Gaunt, but about the wider history of African Americans in the village.

McGruder, who helped develop the “Blacks in Yellow Springs” series, and who represents both The 365 Project and Central Chapel AME Church on the Sculpture Project’s committee, said the committee sees the upcoming sculpture as an important and continuing locus for community conversation.

“This is really more than a sculpture — we’re using the sculpture to inspire an ongoing program that will really help us understand Yellow Springs’ rich history around diversity and philanthropy,” McGruder said. “We feel that Wheeling Gaunt is an entry point into conversations about a lot of different things about what makes Yellow Springs the strong community that so many of us love. He could have moved almost anywhere. But he came here, and he remained here for the rest of his life, and there are some really good reasons why he decided to stay here.”

Now about halfway through its projected three-year development, the Sculpture Project still has a ways to go to meet its fundraising goal of $169,000 before the sculpture’s planned June 2020 unveiling.

“We’re still looking for donations, from a little to a lot,” said Durgans. “We’re hoping that people will see the importance of the project and want to contribute, not just monetarily, but by attending these programs.”

McGruder said that, though there’s still much work to be done, he was inspired this week after Central Chapel AME held a special service detailing and honoring Gaunt’s life for Black History Month.

“To put it in perspective, at the end of our service, I was talking with former Council member Gerry Simms, and he said that he felt it was the least that we could do,” said McGruder. “I’m not saying that the fundraising is easy, but we have many fewer obstacles and many more resources than he [Gaunt] had, and he was able to do a lot with what he had. So I think we can really be motivated by that.”

To stay updated on the progress of the Wheeling Gaunt Sculpture Project, or to donate, visit ysartscouncil.org/event/gaunt-bronze-project.