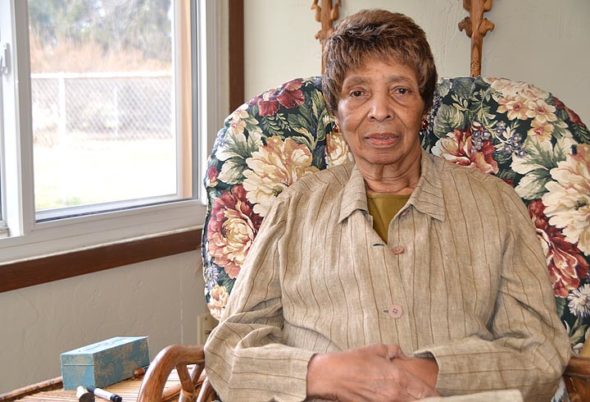 Alyce Earl Jenkins is shown in her Omar Circle home. She has been widely recognized for her work of rehabilitation counseling at Wright State University. (Photo by Diane Chiddister)

Just try to find some blank space on the walls of Alyce Earl Jenkins’ home study on Omar Circle. The walls are covered with photos of friends and family, but mainly they are blanketed with the plaques and framed certificates from a lifetime of being recognized for outstanding performance and service.

“Sometimes when I’m feeling down, I come in here and think, well, I did make a contribution to different communities at different times,” Jenkins said in an interview last week.

That’s quite an understatement. Jenkins, who is 83, has had a more than 40-year successful career, first as a printer and then as a regional pioneer in the field of vocational rehabilitation, the work for which she has received the most recognition.

That’s only a glimpse of the more than 25 awards on the walls, including many from more than 30 years teaching at Wright State University. Those awards include the Dean’s Award for Faculty Excellence in 1992, an Award of Appreciation from Undergraduate Rehabilitation Students in 1993 and the Teacher Excellence Award for 1977 and 1978.

Teaching young people to become vocational rehabilitation counselors has been a satisfying way to spend her life, Jenkins said.

“It’s about helping people with disabilities enter the work force, as well as helping their families,” she said.

Jenkins has also written grants that brought in hundreds of thousands of dollars to Wright State, Wilberforce University and Alabama A&M, her alma mater, in the areas of rehabilitation counseling and diversity awareness. And she served as a consultant to institutions and municipalities to help those entities become accessible to disabled people.

Along the way, Jenkins has also made significant contributions to her community. Her neighbor, Kevin McGruder, interviewed Jenkins as part of the WYSO Civil Rights Oral History Project, when she discussed her early years as the only woman in a mainly male-dominated field of printing.

“Alyce’s love of learning led her to a remarkable range of careers,” McGruder wrote in an email this week. “In retirement she has continued to share her knowledge.”

After decades of a career-filled life, Jenkins doesn’t mind the quieter life of retirement. An introvert, she is comfortable with her own company. She enjoys walking and reading.

It’s a very different life than the one in which she grew up in the deep South, in the city of Birmingham, Ala. Jenkins’ father was an auto mechanic and her mother a maid. To Jenkins, her neighborhood of professional black families was a wonderful place to grow up, even though she thought her family was the poorest family around.

But she had many warm experiences. One of the women who hired her mother to clean, Mrs. Akin, took a liking to Alyce when her mother brought her along on the job. While her mother cleaned, Mrs. Akin introduced Alyce to recordings of operas, concerts and theater productions, and the two would talk about what they heard.

As a child, Jenkins rebelled against many societal norms, including gender roles. Her elementary school, like most schools in those days, offered classes in cooking and sewing for little girls and in vocational training for boys.

“I didn’t want to cook and sew,” she said, so she enrolled in the class that taught printing, thus finding the first of her future vocations. But she notes that had her school offered training in auto mechanics, the work of her father, she might have ended up fixing cars.

She followed her own path, even as a child.

“I always was an independent spirit,” she said.

While Jenkins has mainly good memories of growing up, she also remembers   troubling glimpses of the racism that was very much alive in the South at the time. As a child, she remembers members of the Ku Klux Klan parading down her street in their white hoods. And once when she was in a car as a college student, she noticed a string of cars in the other lane driving slowly with their lights on inside, illuminating whole families dressed in white Klan robes and hoods.

“It was frightening,” she said.

Jenkins’ independent spirit propelled her to Alabama A&M University in Normal, Ala., where she earned a degree in mechanic arts, or graphics. After she graduated, an old friend who was working at Central State University needed an assistant in the printing department, and he asked her to join him there. So she moved to Ohio, spending eight years as assistant director of printing at the historic black college.

While she liked being one of the few women in a male-dominated field and being one of the few females who could run a linotype machine, Jenkins found that she wasn’t all that fond of getting dirty. So when the state of Ohio offered her the opportunity to study vocational rehabilitation counseling rather than continue her work as a printer, she took it, earning a master’s in rehabilitation counseling from Kent State University.

That graduate degree led to a job as a counselor for the Bureau of Vocational Rehabilitation in Dayton. After that, she became director of counseling at Wilberforce University. And in the early 1970s, the newly established Wright State University came calling, asking her to help launch a new vocation rehabilitation counseling program.

It took a while to say yes, Jenkins said. First, the school leaders weren’t offering her a good salary, so she held off. She was married to a man at the time who worked for the city of Dayton as an engineer, so she didn’t have to work.

“I kept saying no,” she said. “The dean kept calling.”

After a while, the school made a better offer, and Jenkins took it, beginning a 30-year career with Wright State. Starting as an instructor, she moved up to assistant professor and then associate professor. And in the 1990s, she served as interim associate director of the school’s Center for Teaching and Learning. She also published more than 20 articles in professional journals, including the “Journal of Rehabilitation,” “Academic Therapy” and “Rehabilitation Education.”

Most of all, Jenkins said, she enjoyed working with students.

“I was focused on helping students achieve their goals and become involved in the community,” she said. “I’m proud of that.”

After retirement, Jenkins began her own consulting company in the field of rehabilitation counseling and disability awareness, working with municipalities such as the city of Dayton on employment issues with disabled people, and with Wilberforce University on accessibility efforts.

She has also been involved locally with her church, Central Chapel AME, and with The 365 Project, among other organizations. And she has shared her growing up and professional experiences with McGruder as part of the WYSO Civil Rights project.

As someone who grew up in the deep South, Jenkins said she’s not surprised at the racism that seems to have helped propel Trump to the presidency.

“I think that people who don’t like black people — they don’t let that feeling go,” she said.

But she is more discouraged about the changes she’s seen in Yellow Springs, especially the shrinking of the local African-American population, since she moved here in the late 1950s.

“When I first moved here, there were lots of blacks,” she said. “Now there are so few.”

It feels uncomfortable sometimes, being one of the much smaller percentage of blacks in the village, Jenkins said. And she also feels the loss of many old friends who have died or moved away.

But Jenkins is still the independent spirit she has always been, and sometimes that spirit takes her downtown, where she sits on the bench by the post office, or on Glen Street by Town Drug.

While she sometimes takes a book to read, Jenkins especially likes to say hello to passersby and mostly just people-watch, observing the life of the small town she has called home for more than five decades.

One Response to “Alyce Earl Jenkins— Recognized for service, teaching”