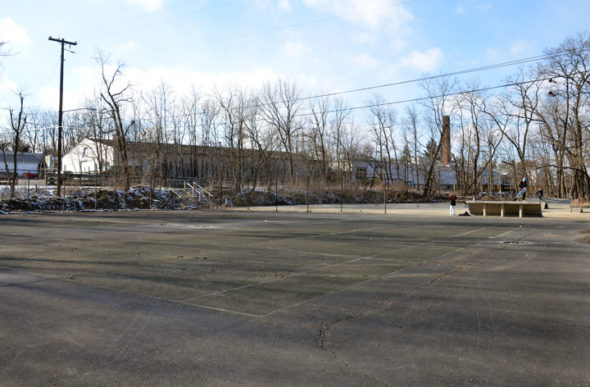 A view of the old tennis courts behind the Bryan Center, the site where new basketball courts will be built later this spring.

From the March 7 issue of the News:

The basketball courts behind the John Bryan Center are being converted to parking, according to a new plan from the Village. But those who played there won’t have to dribble far to find a new hoop.

This spring, the Village will create 26 additional parking spaces on the two former basketball courts. They also plan to set up at least one new court in an adjacent lot, the current site of two underused tennis courts. They hope to do so by mid-April.

Overall, the vision is to beautify the recreational area, which also features a playground and skate park, and add much needed parking for downtown, according to Public Works Director Johnnie Burns, who conceived the idea.

“We’re actually trying to make it more user friendly and add parking,” Burns said this week. “I know 26 spots is not a lot of spots, but it will matter.”

This week, Village Manager Patti Bates said that the Village hopes to team with interested villagers to raise money to install the next phase of the skate park design, a process which began several years ago. If interested, contact Bates at PBates@vil.yellowsprings.oh.us. 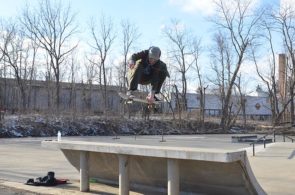 Danny Hockett of Springfield flew up and over a concrete ramp at the Village skate park earlier this month.

As part of a makeover of the site, the Village will also remove invasive and dead trees and undergrowth between the courts and the bike trail as well as behind the skatepark, replanting new species in consultation with the Tree Committee and other arborists, according to Burns.

According to a preliminary design of the new basketball area, one court will feature two 10-foot hoops, with two hoops to be set at lower heights, perhaps six or seven feet, for smaller children. While the four basketball posts and rims will be reused, the Village plans to purchase new backboards and nets.

Because the Village is using the existing blacktop and only seal coating and striping the area, the cost to the Village to create the parking lot will be around $2,500, Burns estimated. Additional  project costs include new fencing to be erected and a gravel entrance. And $10,000 is already  slated to be used to replace the wooden stairs connecting the skate park to the Little Miami Scenic Trail with concrete ones.

In total, Burns estimates the project will cost less than $20,000. Burns said he is reaching out to known basketball players and coaches ahead of the changes for advice. The goal is to complete the upgrade by mid-April, in time for the annual influx of tourists, he said.