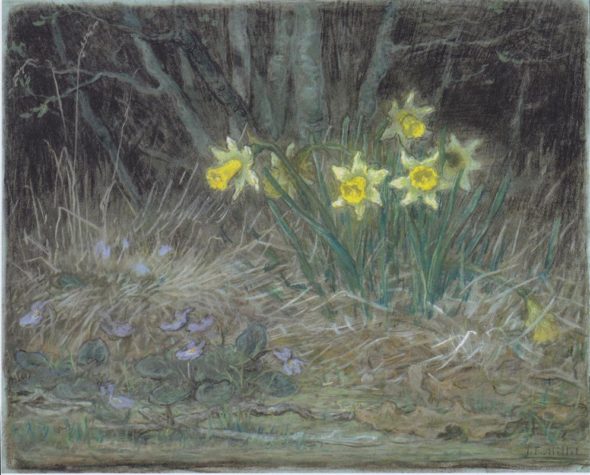 First Lines — The season of firsts

Spring. We become aware of it not just by the calendar, but more viscerally by signs. By firsts. The first freckling of winter aconite, the first shine of crocus. The first robin song. No matter that the excitement of discovery repeats each year. The cycle is part of the thrill. The firsts we tally are held within the promise, the continuance we count on. That continuance — so far at least — goes on.

This month’s poem is by Ed Davis, poet, novelist and retired college professor. It is a poem of early spring. Ed wrote it last March, on a walk in Glen Helen. The weather was verging on mild, winter in retreat. So where were the spring flowers? Leaving the Glen the way he came, by the stone steps, Ed saw it — the first flower, “a little bit of just gorgeous violet,” he recalled recently. He stopped, looked, took it in. Then took his little Moleskin notebook from his pocket and wrote the first draft of a poem. Drafts later, that poem became this one:

One of the things I enjoy about this poem is its movement from noticing to rumination to what you could call the “fruit” of rumination — the thing that rumination was after. The first stanza is about looking. There it is: the “tiny, wild” violet. The mind begins to roam around a bit. The second stanza reflects that roaming. He’s struck by the fact that “you can never go back under- / ground, once you’re out.” I like how the line break in the middle of “underground” allows us to emerge, through the word itself, into the accurate understanding that when you’re out, you’re out for good. The third stanza floats another notion, likening the first flower to the “dubious blessing / of human birth.” This thought introduces something new. I can feel the poem’s energy shift, or flare. In the closing lines, the speaker sees the violet again. But this time, the third eye — the eye of mind or soul — is open. And the violet is transformed: “purple flesh as tender / as an infant’s eyelid.”

The poem’s movement reflects to some degree Ed’s process. He starts poems outdoors, often in the Glen. Then moves them inside, to his study, revising and expanding the original jotted lines. “Revision is so much where and when the good stuff happens,” he said. Throughout, he is also moving the poem deeper inside himself. As a poet, I’m fascinated by how the meanings that accrue in a poem both are and aren’t there in the original image or impulse. We work on poems — but they also work on us. A violet leads us to an infant’s eyelid, and suddenly we grasp the risk and joy of birth.

Everyone can and should write poems, Ed believes. The process acquaints us with our own minds and hearts, and enriches even the simplest moments of living. Spring is a good time to begin. Anybody can go out into the world, into the woods, and find a poem. “Poems are right there to be found,” Ed affirmed. The season of firsts is here. Your first poem — your first this week, your first ever — is, too.

You can hear Ed Davis read from his work, together with local poets Anne Randolph, Judy James and Sara Smith, on Friday, March 22, 6–8 p.m., at Epic Bookshop, 229 Xenia Ave. The evening’s theme is the Spring Equinox.