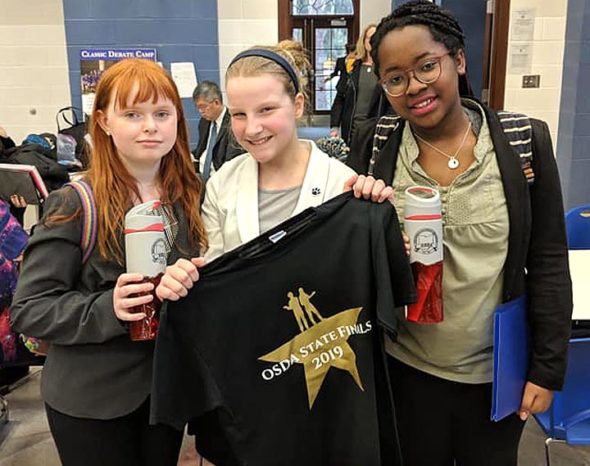 From left, Maggie Wright, Payton Horton and Gini Meekin at the Ohio State Championship for Middle School Speech and Debate, where the trio made strong showings in their categories. (Submitted photo)

On Friday, March 8, Mills Lawn sixth-grade students Gini Meekin, Maggie Wright and Payton Horton loaded up their backpacks and garment bags and departed for their overnight trip to the State Championship for Middle School Speech and Debate in Poland, Ohio.

While there was much excitement at the outset of the trip, students and Coach Jackie Anderson began their journey with a moment of silent regard and well-wishes for their absent teammate, fellow sixth-grader Kian Barker. Barker was to be the only Yellow Springs student — and one of only two middle school students in the entire Greater Miami Valley District — competing with a 10-minute original speech. Unfortunately, Barker fell ill with fever and was unable to attend. Head Coach Brian Housh and Middle School Coach Jackie Anderson had the opportunity to observe Barker’s would-be competition in their capacity as judges, with Anderson coaching the state finalists in the Oratory category. Both agreed that the content and construct of Barker’s speech, along with his colorful delivery perfected over some five months, would have merited a high-place finish in the State finals.

Maggie Wright’s category of Middle School Interpretation was the most densely packed field of contestants. This, paired with the fact that she had only competed in one tournament prior to the state finals, makes her overall finish of 13th in the state of Ohio impressive. Coach Anderson credits Wright’s success to her enthusiasm for bold choices in her depiction of three different characters, as well as her willingness to lean into the extra support offered by her theater-savvy mother, Megan Wright.

Mrs. Wright’s assistance with coaching the Middle School team was also a likely contributor to the success of Gini Meekin, who finished 14th overall in the state in her category of Middle School Declamation. Meekin had been honing her delivery of a portion of the Ted Talk by Sarah Kay, featuring the spoken word poem “B (If I Should Have a Daughter).” Meekin’s delivery was unique in the category, which typically deploys a formulaic presentation style that varies little from speech to speech. Meekin’s work was both courageous and edgy, featuring gestures and physicality that demonstrated loyalty to the speech content above adherence to the category’s rote formula. Meekin’s performance revealed the capricious nature of judging at even the highest level of speech competition: in one round of competition, two judges responded to the same performance in seemingly contradictory manners, with one judge ranking her second in the round and praising her “beautiful gestures,” while the other judge placed her last in the round, citing her “unnatural gestures.”

Payton Horton’s performance adhered to the more traditional delivery of her speech in the same category, relying instead on her charismatic, high-energy depiction of Dominic Augustin’s “A Fistful of Rules.” Her range was on display as she portrayed the humor of a small child intent upon swallowing a worm, the headlong rush into independence of a new college student, the cautionary tale of a “responsible” adult whose ambition threatens relationships, and the isolation and confusion faced by many in our senior population. Horton’s dedication and work ethic paid off — she topped all but two competitors to bring home third place in the state of Ohio for Middle School Declamation.

The writer is a parent and middle school speech and debate team coach.