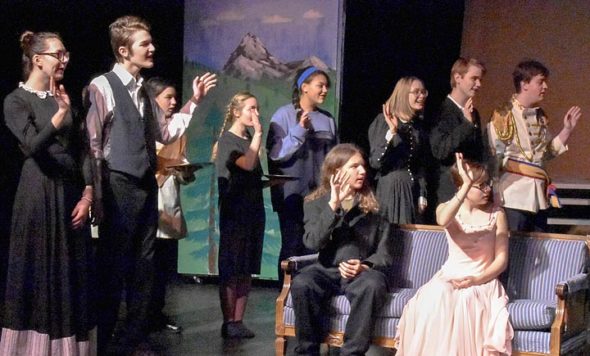 Auf wiedersehen, Gesundheit! The Sound of Music has been rescheduled once more for April 11–14. Pictured above are members of the cast waving "auf wiedersehen, goodbye" at a rehearsal March 6, shortly before flu and other upper respiratory illnesses laid low many of the performers and their classmates. (Photo by Luciana Lieff)

Opening night and subsequent performances of “The Sound of Music,” which had been slated  for this Thursday, March 14 through Sunday, March 17, have once again been rescheduled, affording cast members who had fallen ill from the current flu outbreak more time to fully recover.

In a letter to students and parents, theater arts instructor and director Lorrie Sparrow-Knapp wrote:

This week finds the Sound of Music cast and crew still struggling from illness.   With a large portion of the cast recovering and still vocally weak, and with others starting their initial round of one of several bugs going around, we have decided to give our students time to fully recover so they can have a positive educational theater experience, one they have worked hard for and fully deserve.

Performances, which will be at the Foundry Theater on the Antioch College campus, have been rescheduled for the following dates and times:

Tickets purchased in advance for a particular performance date will be honored for the corresponding rescheduled date. To exchange tickets for another performance due to a scheduling conflict, please contact Jovan Terrell, jterrell@ysschools.org.