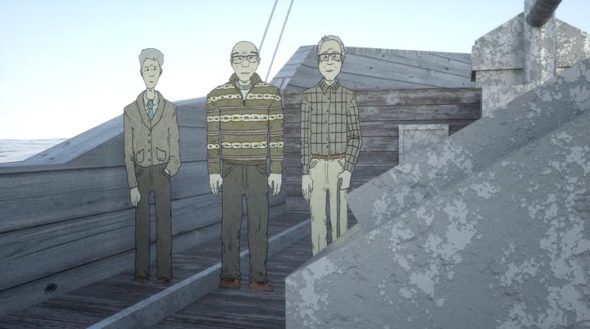 A still from the animated documentary, Day of the Western Sunrise, about 23 crew members of a fishing boat, who survived the atomic bomb test in the Bikini Atoll in 1954. (DALIBORKAfilms)

On the morning of March 1, 1954, on an island in the central Pacific, the United States detonated the most powerful atomic bomb it would ever test. In less than a second, the 15-megaton nuclear device created a fireball 4.5 miles across in a blast 1,000 times more powerful than each of the bombs dropped in Hiroshima and Nagasaki.

What happened next was devastating. Winds spread the contamination from the larger-than-expected explosion over a massive 7,000-square mile area. Thousands of native residents of the Marshall Islands, along with 23 Japanese fishermen, were irradiated, while the ecosystem of the island chain was irrevocably devastated. 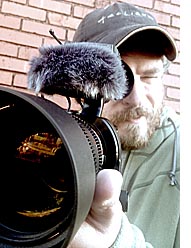 Filmmaker Keith Reimink will be present at the screening of his animated film, “Day of the Western Sunrise,” at the Little Art Theatre, Tuesday, April 23, at 7 p.m. (Submitted photo)

A new animated documentary on the infamous Castle Bravo nuclear test looks at the disturbing history and legacy of U.S. nuclear weapons testing in the Pacific. “Day of the Western Sunrise” will be shown on Tuesday, April 23, at 7 p.m., at the Little Art Theatre. A question and answer session with filmmaker Keith Reimink will follow the 76-minute film.

The Little Art, as a co-sponsor of the film, is waiving rental fees. While the film is free to attend, a $5 recommended donation will support the filmmaker.

Villager Tanya Maus, director of the Peace Resource Center at Wilmington College, is bringing the film to town to raise awareness of the continuing threat of nuclear proliferation. Maus also looks to highlight — during Earth Week — the grim ecological and human impacts of the more than 100 atmospheric and underwater nuclear tests that were performed in the area.

“I don’t think a lot of people really remember how many nuclear tests the United States did,” Maus said this week, adding — of the long-term environmental effects — “It’s a huge impact.”

Many of the 20,000 Marshallese living on the islands were exposed to radioactive contamination, leading to a rise in cancer, Maus said, while the ecology of the islands was critically disrupted. Today, the native populations can no longer rely on traditional subsistence-based lifestyles of cultivating native plants and eating fish and shellfish, she said.

Bikini Atoll, the site of 23 nuclear tests, including Castle Bravo, is still unsafe for islanders to return to, despite displaced residents being told they would be able to come back to their original home, according to a lawsuit filed by Bikinians against the U.S. government.

“The people of the Marshall islands continue to live in poverty, while their islands became the dumping grounds for nuclear waste,” Maus said.

Meanwhile, the Japanese fishermen suffered acute radiation sickness, and their plight “sparked the disarmament movement,” according to Maus, who teaches courses at Wilmington on the nuclear bombings and post-war tests.

“It’s really the point where people, both in the Untied States and Japan, started to mobilize,” Maus said.

After an astonishing 210 megatons were detonated in the air and waters of the Pacific, nuclear testing was halted there in 1958, and the U.S. began testing underground. Radiation remains in the Pacific, however.

“All of that radioactivity spread into the air and ocean,” Maus said. “It’s kind of unimaginable to think about.”

The human fallibility and technological complexity of managing a nuclear arsenal capable of mass destruction is at the heart of Eric Schlosser’s 2014 book, “Command and Control,” which piqued Reimink’s interest in the topic, the filmmaker wrote in an email.

“It’s a 600-page scathing report on the management of America’s nuclear stockpile,” Reimink wrote of the influential book.

Schlosser’s work references the Japanese fishing boat, Lucky Dragon, and, finding little information on it,  Reimink decided to do his own research. Over the next six months, he tracked down the boat, which is now in a museum in Japan, and from there got in touch with the surviving crew members and arranged to interview them.

The film was well received in Japan, where it has been screened three times, Reimink added. Audiences are especially interested to see how American filmmakers deal with the topic, he wrote. His last visit to Japan also coincided with the death of one of the fishermen, a film subject. Attending the funeral was -poignant.

“It was emotional of course, but I’m glad that we were there to pay our respects,” Reimink wrote.

The film has won numerous awards, including the 2018 Humanitarian Award from the IndieFEST film festival, and was a finalist at the Columbus International and Philadelphia Independent film festivals.

The issue of nuclear proliferation is especially salient in the present political climate, Maus believes. In February, the U.S. suspended a major nuclear arms-control treaty with Russia. At the same time, it began developing its first long-range nuclear weapons since 1991, according to a New York Times article.

In addition, the U.S. is pivoting toward low-yield nuclear weapons, which they believe can be used without “mutually-assured destruction,” but could turn out to be a dangerous development, Maus explained.

“Once you use a low-yield weapon on a population, the desire to retaliate will escalate,” Maus said. With more than 2,000 nuclear weapons ready to deploy at any moment, the threat is real.

“The lower-yield weapons will increase the likelihood of a major nuclear war,” Maus said.

Nuclear proliferation is also a matter of social justice, Maus said, as resources dedicated to building a nuclear arsenal cannot then be spent on other needs. According to a recent projection from the Congressional Budget Office, the U.S. is set to spend close to $500 billion on its nuclear forces over the next decade.

“The production of nuclear weapons uses huge amounts that could be spent on things to improve quality of life such as health benefits,” Maus said. “We can’t lose sight of the role nuclear weapons play in the budget and how much it affects us.”

It’s one reason the civil rights leader Martin Luther King, Jr., spoke out against nuclear proliferation, according to Maus.

“A nation that continues year after year to spend more money on military defense than on programs of social uplift is approaching spiritual death,” King said in 1968.