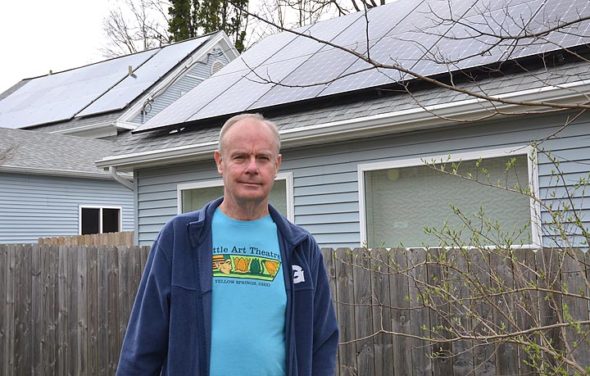 Gleaming solar panels hang on the steeply pitched roof of Eric Johnson’s South High Street home, and also top an all-electric tiny house in his backyard.
Last year, Johnson’s solar panels met 90 percent of his household electricity use. And, most importantly to someone concerned about climate change, the 10-kilowatt array helped him produce less carbon dioxide. (Photo by Megan Bachman)

Last year, Johnson’s solar panels met 90 percent of his household electricity use. And, most importantly to someone concerned about climate change, the 10-kilowatt array helped him produce less carbon dioxide.

“I want my grandkids to know that I did what I could,” he said of the panels.

Johnson’s is one of about 100 solar-powered households in Yellow Springs.

An opportunity for even more villagers to go solar is now arising with the formation of a solar cooperative here.

By joining the solar cooperative — which will cover all of Greene County — residents get several benefits they can’t on their own, according to organizers this week. For one, participants get a group rate for their solar array that is usually cheaper than buying alone.

Participants also get help selecting a qualified installer, according to Luke Sulfridge of Solar United Neighbors, the nonprofit spearheading solar co-ops across the country.

“By talking to their neighbors, instead of researching it by themselves, the co-op provides a lot of confidence for their participants that they’re getting a good product,” Sulfridge said.

Villagers and county residents interested in joining the co-op, or in getting more information, are invited to a public meeting on Tuesday, April 16, at 7 p.m., at the Glen Helen Auditorium, 405 Corry St.

Sulfridge, the Ohio director of Solar United Neighbors, will be on hand to talk about solar energy and the co-op model. The organization, which Sulfridge calls “installer neutral,” helps set up the co-ops and guides them through the bidding process. The nonprofit’s fee of $600 per installation is built into the proposal.

Sulfridge has organized similar co-ops in Oberlin, Worthington, Delaware and Kent, among other Ohio communities. So far close to 20 co-ops in Ohio have installed 1.4 megawatts on 200 homes and businesses, according to Sulfridge.

The goal of the co-op is to get at least 30 Greene County households signed up to install solar on their properties later this year, Sulfridge said.

But local organizers hope for even more, since green energy is key to addressing climate change, they said.

To Ellis Jacobs, of Green Environmental Coalition, climate change is the most critical environmental issue, and one that Yellow Springs can do more to fight.

“The most important environmental work you can get involved with is climate. It is the linchpin of everything else,” Jacobs said.

Although the Village already purchases around 90 percent of its electricity from renewables, rising electric consumption in the village means that demand here is increasingly being met by coal-fired power, Jacobs explained.

“Because our energy consumption has gone up since the economy has improved and Cresco has come online, we are filling in on the spot market — mostly coal — which is not great,” he said.

“We have the opportunity to supplant that with free energy,” Jacobs said of role of renewables.

But, according to Laura Skidmore of Mothers Out Front Yellow Springs, the local chapter of a national environmental group, the village is not green enough yet.

“Yellow Springs has made strides towards improving the environmental impact of our energy choices but there is more that could be done,” she said.

To Skidmore, the co-op is an opportunity for some residents to go further.

“I love the fact that residents will be able to green their electricity usage beyond what the Village has done,” she said. “It’s an opportunity to impact our carbon emissions and that has a big impact on the future for ourselves and for the young people and the kids.”

A matter of economics

Although environmental concerns are at the heart of Solar United Neighbors’ mission, economics is driving the recent wave of solar installations, according to Sulfridge.

Solar panel prices have continued to plummet in recent years while loan rates to finance solar projects have also dropped, leading to a robust market for solar.

“A lot of it is still environmentally driven, but increasingly the finances are making sense to people,” Sulfridge said. “We have banks and insurance companies putting solar on their roof. It’s not the usual players.”

According to Sulfridge, the price of solar panels has fallen 80 percent in five years, while the typical amount of time it takes for an initial investment in a solar project in Ohio to be paid back is now somewhere between eight and 12 years.

“That’s a lot less than it was,” Sulfridge said.

Even though the solar industry is growing in Ohio, support for renewables from state lawmakers has waned in recent years. In 2014, Ohio became the first state to weaken its renewable energy portfolio standards, which required investor-owned utilities to produce a certain percentage of energy from renewables.

Now, the Legislature is looking at a more dramatic alteration of the portfolio standards, in addition to propping up nuclear and coal-fired power plants, according to Sulfridge.

“It’s been tumultuous at the statehouse,” said Sulfridge, who lives in Washington County near Marietta.

By comparison, a strong portfolio standard in Washington, D.C., means it takes only one-third as long to pay back an initial investment for a solar system there, Sulfridge explained. That’s because utilities end up purchasing the renewable energy credits from residential producers to meet portfolio standards. It’s one reason why Michigan, which gets less sunshine, has twice as much solar as Ohio, according to Sulfridge.

But even with the state’s trajectory, solar still makes sense in Ohio, Sulfridge said.

“I wouldn’t discourage it, I just want to show what is happening elsewhere,” he said.

According to calculations at Solar United Neighbors’ website, 25 years after installing a 4kW system, not only would the solar array break even, it would generate an additional $9,800 in profit due to continuing energy savings. An 8kW system would generate $19,600 in profit over that same time frame.

Because of a high number of solar installations here, local laws are already set up in support of solar, according to organizers. The Village, which operates its own electric utility, has net metering laws in place to compensate property owners for the electricity they produce.

However, a few years ago the Village set a limit for residential solar of 1 percent of its total electricity portfolio, which has been around 30 megawatts.

But Jacobs believes that even if the installations were to approach that cap, recent electricity demand growth means there is now more room in the town’s portfolio for solar.

“It appears there is plenty of headroom in our energy portfolio for a significant number of rooftop installations,” Jacobs said.

Beyond the financial rewards of free energy once the initial investment is paid back, solar energy accrues other benefits, organizers said.

If more residences put solar on their roofs, the local grid would benefit, according to Sulfridge. For one, a more distributed electricity grid lessens the burden on infrastructure, he said, while electricity generated locally during peak use, usually hot summer days, could reduce electricity rates utility-wide.

“They are reducing the peak load for everyone by producing energy when they need it the most,” Sulfridge said.

Plans for community solar, however, will have to wait. A solar co-op only applies to systems installed on residences and businesses on their site. That means that villagers with too much shade on their roofs, or other factors that would prohibit solar on their rooftops, would not be able to participate.

Skidmore has a perfect roof for a solar array. It’s south-facing and free from shade. While she’s still undecided, she’s planning to come to the informational event and hopes others do too, especially as climate news continues to worsen.

“It’s hard to keep up optimism because time keeps ticking away and we’re losing opportunities,” Skidmore said about climate change. “So with the solar co-op, I really want people to come out. I’m going to be there.”