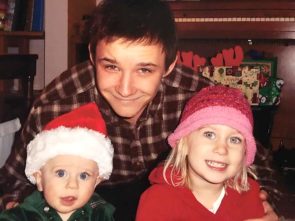 Born in the city of Chelyabinsk, Russia, in 1992, he was adopted by Eric Clark in 1997 and brought to his new home of Yellow Springs. Later, Lonya finally got a mom when Eric married Jacqueline, a longtime friend.

Lonya spent his early childhood at the Yellow Springs Community Center, where he learned to speak English. He then moved on to the Antioch School, Mills Lawn Elementary, McKinney Middle School, Greene County Career Center, and finally Yellow Springs High School, where he graduated. Lonya enjoyed traveling throughout the U.S., cruises and visits to other countries and island nations. He loved spending time with his grandmother, Dorothy; his uncles, Roy and Scott; and aunts, Dawn and Jeanine. There was never a playground he didn’t enjoy.

Lonya will be missed by Eric and Jackie (mom and dad); Paige and Levi (his younger sister and brother); Dawn, Roy, Scott and Jeanine (aunts and uncles); as well as extended family in Cincinnati, including Jackie’s parents, James and Juanita Stauffer, who became his grandparents; sister Janet and her husband Scott Cain (Aunt Janet and Uncle Scott) and cousin Elizabeth.

Lonya was known for his musical ability, generous spirit, and extraordinary ability to befriend anyone he met. He was always ready to lend a hand, even if it meant leaving his ever-present cup of coffee behind. He held a variety of jobs within the village and had what many would consider a “restless soul,” always looking for a new adventure. He touched many lives in his small town. He was often given the opportunity to move on but never wanted to leave his village or friends.

There will be a celebration of life service on Saturday, June 1, at the Presbyterian Church. The service will begin at 1 p.m. with video of his first two years in the orphanage followed by opportunities for attendees to share their experiences with Lonya. Following the service, there will be an informal reception in the main hall at 2:30 p.m. Visitors are highly encouraged to write a small note about him which will be posted for others to see. All are welcome.