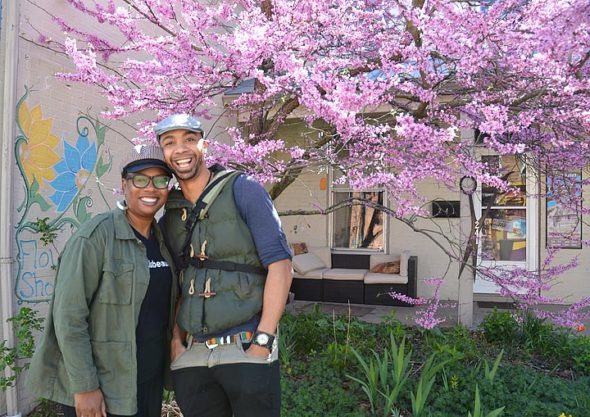 Cheryl Durgans and Elias Kelley in downtown Yellow Springs. Their upcoming web series “Little Village” was filmed in many locations around the village. The show’s promotional materials will include an app developed by Kelley that will allow smartphone users to scan “Little Village” logos placed on downtown locations like the Emporium and Tom’s Market and watch scenes from the show. (Photo by Lauren ‘Chuck’ Shows)

Imagine a village that looks a lot like this one, but it’s entirely self-sustaining, with its own independent infrastructure, economy, governance — and a whole lot of secrets.

That’s the basic conceit of “Little Village,” a web series co-created by villagers Cheryl Durgans and Elias Kelley, slated to premiere some time this year. A trailer for the upcoming show was released on the show’s Facebook page at the end of 2018.

Durgans and Kelley said in an interview this week that they both have backgrounds in the arts. Durgans is a village native; after graduating from high school, she left town to attend the HBCU Spelman College in Atlanta where she studied art, specifically photography and printmaking. She worked for the Mural Arts Program in Philadelphia, and eventually earned her MFA in studio art. But she came back to town when her mother, the late Mary Durgans Willett, fell ill.

“I came back here for eight weeks — six years ago,” she said. Since then, she’s built a new life here, working as an artist, a massage therapist and an adjunct professor at Wilberforce University, among other things.

“I’m basically the quintessential face of the gig economy,” she said, laughing.

Kelley is a transplant from Atlanta, where he initially began work as a screenwriter. It was a hard task trying to get his work into the right hands, or often any hands, he said. Around 2005, he ended up working with Georgia’s Economic Development Department, specifically working on the state’s film tax credit incentive, which has helped launch Atlanta into one of the world’s top three filming locations.

Though he craved creative work, Kelley said he enjoyed his time working on the tax incentive. “Math kind of takes well with me,” he said.

After working with numbers for so long, Kelley said he started to work some numbers of his own: what would it take financially to develop his own studio, so that he could make the kinds of projects he wanted to make?

It’s what he was considering as he took a plane from Atlanta to New York in 2009, and was seated next to a stranger who also happened to be in the film business. The two got to talking, he said, and just as the captain announced that they were flying over Ohio, the man leaned over, pointed out the window and said, “The stuff we do? It’s not possible down there.”

Kelley wasn’t convinced — as far as he was concerned, Ohio could foster as much creativity as any other place in the U.S. So the man in the seat made him a sort of gentleman’s bet: move to Ohio, make film, see if you can hack it. Coincidentally — or, perhaps, by cosmic design — that year Kelley’s mom, villager Dr. Venita Kelley, said she’d bought a house in the village, and Kelley followed.

“I was a starving artist from Atlanta, and Yellow Springs became my solace,” Kelley said. “And I basically came here on a dare.”

Durgans and Kelley said they met at a party about six years ago over a game of Pictionary. They bonded over sharing conversations about their philosophies and their lives, and their shared love of sci-fi and mysteries. Kelley was also interested in Durgans’ experience as a village native, and what it was like to come of age here.

“I won’t say this is everybody’s experience, but it was very difficult for me here as a brown-skinned little girl growing up,” she said.

It was through these conversations over the years that the initial seed for “Little Village” was planted.

“It was kind of a secretive project that I hid away from her for a little bit,” said Kelley. “As we talked over the years, she had no idea that I was kind of jotting down notes about some of her life stories — a lot of these have found their way into the script.”

This was the project that Kelley had been looking for when he decided to leave Atlanta for the unknown vista of the rural Midwest.

“This little village was my Hail Mary, if you will,” he said. “So I approached Cheryl and said, ‘This is the best show that I’ve got, and we can do it here.’ And she was like, ‘OK, I can dig it. I can dig it.”

The story of “Little Village” isn’t little, said the two: there’s a complex lore running underneath each episode. Without giving too much away about the show’s plot, Kelley explained:

“This is a village in the middle of the Midwest that is self-sustaining. It needs nothing — it has its own Wi-Fi, its own inner economies, its own water. It’s almost like an island. But at the same time, it’s got the eye of everybody outside — basically, this little island in the Midwest is sitting on real, raw power. It holds all these mysteries, and there are people protecting it. But things are becoming strained as more people want in — and the village isn’t sure if the metaphorical levies on the outside are going to keep this wave of industry from crashing in, and what it will look like if they don’t.”

Durgans and Kelley said they have woven elements of science fiction, magic and spirituality into the narrative, which Durgans partially credits to her love of famed African-American sci-fi author Octavia Butler.

“Reading Butler literally saved my life,” said Durgans. “She was huge for me because I was like, ‘Wait, a black woman is writing sci-fi? And she’s creating her own languages and her own worlds? Ah, man, that’s dope!’” 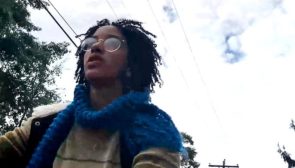 At its heart, though, said Durgans and Kelley, “Little Village” is a coming-of-age story. The story is told from the perspective of teenager Arica Penrose, played by young actor Sumayah Chappelle. Arica is a composite of Durgans herself, built from the pieces of her life story that Kelley curated during their conversations, and the creative duo’s imaginations.

“You don’t see a lot of coming-of-age stories about young, black women,” said Durgans. “The show doesn’t make an explicit statement on race, but there is an implied understanding of the strength and power of a young, black woman that you don’t see very often.”

Kelley and Durgans said they’ve made sure that “Little Village” is almost entirely a local effort — the show’s trailer boasts familiar faces like Chappelle, Aaron Saari, Jovan Terrell and John Fleming, as well as Kelley, who also acts in the series. There’s also quite a bit of local work going on behind the camera: the crew recently began the process of recording automated dialogue replacement, or ADR — in common parlance, that’s “dubbing” — at SoundSpace.

Community productions so often rely on volunteer work, but Kelley and Durgans say they think that just because the talent is local and the work is coming from friends and neighbors doesn’t mean that it shouldn’t be compensated.

“We work very hard to pay people,” said Durgans. “I would say 80 to 90 percent of the people we work with are from Yellow Springs, and we can’t pay Hollywood-level rates, but we want to value and respect these artists, and in order for us to have a thriving creative community, we have to pay people.”

The crew of “Little Village” has found some creative ways to keep filming costs down — the show’s budget is $12,000, though the creative team is working to triple that through fundraising — with the most significant being that the show has, thus far, been entirely filmed on an iPhone. There’s precedent for this in Hollywood: renowned director Steven Soderbergh filmed 2017’s “Unstable” and 2019’s “High Flying Bird” on an iPhone 7. Kelley said there are also practical applications to using the handheld device.

“You’re able to put [the iPhone] in places where you wouldn’t be able to utilize a larger camera,” he said. “We have the ability to get really, really interesting shots that will progress the story without there being too much of a technical struggle — it’s only six inches long.”

“Little Village” has grown since its initial inception — originally, the eight episodes of the first season would each have been only 10 to 14 minutes long. However, project funders urged Durgans and Kelley to expand the length of each episode to a more traditional 27 minutes. This meant rewriting and expanding their already finished material, and bringing in a team of writers.

“Before, it was Cheryl and I sitting in a dark room saying, ‘OK, all right, let’s do this, this makes sense,’” Kelley said. “We’re lucky to have some writers that came on and understand where we’re going with this.”

Since the show is still expanding, Durgans and Kelley aren’t able to pinpoint a timeline for the show’s release, but hope to have it finished within the year. They intend to release it on YouTube and Vimeo; they’ve already storyboarded an additional five seasons of the show. Kelley has also coded an augmented reality app that will link the show to some of its filming locations around town. Once the show is released, folks will be able to spot a logo from the show at various locations downtown, point their smartphones at it and watch a clip from an episode.

Though “Little Village” has thus far gotten a good amount of support from locals, with lots of people coming on board if only to work as a (paid) extra for an hour, some folks have approached the project with reticence. The trailer for “Little Village” suggests a small town that looks identical to Yellow Springs — see, there’s Bentino’s Pizza, and Foundry Theater, and Mills Lawn — but teeming with dark intrigue and darker motivations. Kelley said this has worried a few people.

“People have come up and asked, ‘What’s the show about? Is it going to be yucky?” said Kelley.

However, Kelley mused that, even if it weren’t intended to be fiction, it would still be a worthwhile thought experiment.

“I’m not sure it’s fair to ask if it’s going to be ‘yucky,’” Kelley said. ‘Because when you look through the history of everything, I mean — what’s not yucky? To be honest, it’s gotta be kind of yucky, so you know where you need to start cleaning.”

Durgans laughed. “You know, the best trees are the ones that grow from sewer lines.”

The YS Library Association will feature Durgans and Kelley at its annual tea on Saturday, April 27, 2–4 p.m., in the library’s Virginia Hamilton Meeting Room. The duo will present “Writes of Passage: Reforming the Narrative of Storytelling” and speak about “Little Village.” Seats at the event are limited; register by calling 352-4003 or email ccollett@gcpl.lib.oh.us.

For more information on “Little Village,” and to view a trailer, visit http://www.facebook.com/lttlvllg.