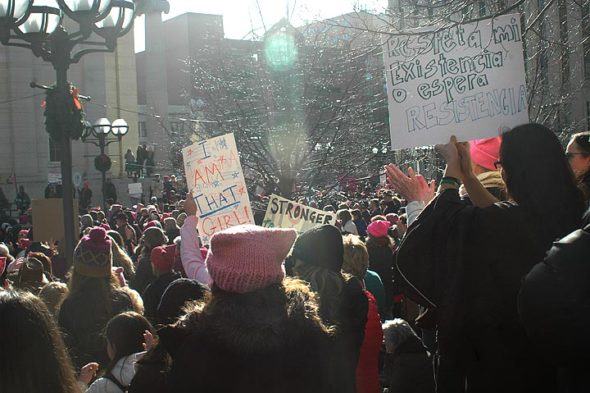 A News archive photo from the 2018 Dayton Women's March. (Photo by Diane Chiddister)

EDITORIAL: A fight for women’s lives

After the Heartbeat Bill was signed into law in Ohio in April, the News published this editorial. It is republished here as the assault on women’s rights continues with the passage of similar — and even more stringent — anti-choice measures around the country in recent weeks.

A fight for women’s lives

Last week, Ohio Governor Mike DeWine signed into law the so-called heartbeat bill, a measure that effectively bans abortion in the state, with no exceptions for rape or incest.

I can’t believe we are here.

I shouldn’t be surprised. The Ohio Legislature, with the support of former governor John Kasich, had been chipping away at abortion rights — women’s rights — for years. It’s true that Kasich vetoed three previous attempts at passing the heartbeat bill, which bans abortion after about six weeks, before many women know they are pregnant. But in his eight years as governor, Kasich signed into law 21 restrictions on a woman’s right to a safe, legal abortion, leading to the closure of half of the clinics in the state that performed them.

Despite these consistent steps to undermine a women’s right to make decisions about her own body, I admit that I got complacent, lulled into believing that that heartbeat bill wouldn’t become law. It’s tempting to believe that it will never take effect. Similar bans have yet to take effect in the four other states that have passed them due to legal challenges. Representatives from the American Civil Liberties Union of Ohio have already said they would file suit on grounds that the law violates women’s constitutional rights. But that’s part of the playbook, as anti-choice groups hope the dispute reaches the U.S. Supreme Court and that the court’s 1973 decision in Roe v. Wade is overturned.

So where exactly are we with this bill’s passage? An abortion ban, if upheld, would create adverse health impacts for already marginalized people and force women to carry pregnancies against their will. In 2019, we are watching the gains that women have made toward equality be stripped away as some continue to be threatened by the possibility of a woman exercising her autonomy, not to even speak of her power.

In the same week that the heartbeat bill became law here, a Texas legislator introduced a bill that would criminalize women who received abortions, with the possibly of a death sentence. Behind measures to “protect the unborn” lurk efforts to subdue women. Controlling women’s reproduction has been a longstanding tactic to control our lives. A women’s body cannot be hers, her agency over it cannot be affirmed, if male dominance is to be maintained. That women might write their own destiny outside of the purview of a man is still threatening in our still patriarchal society. The vocal reaction against the #MeToo and #TimesUp movements, and the continuing belief among some men that they are entitled to a women’s body, is rooted in the same ideology.

While the legal battles ensue, we can expect a continuing assault by state lawmakers on the right of women in Ohio to make that decision about their body with their doctor alone and without the state’s interference. Another blow was recently dealt when the U.S. Sixth Circuit Court of Appeals last month upheld an Ohio law stripping Planned Parenthood of state funds for non-abortion services, including funds aimed at preventing infant mortality. The hypocrisy is obvious, strengthening the argument that the “pro-life” movement is not about saving lives but about controlling women.

In an interview with the News last November, then-candidate DeWine said his abortion stance was about “protecting the vulnerable members of society.” This goal could be achieved by re-funding Planned Parenthood, since the health provider does more to support women’s and pregnant women’s health among the poor and vulnerable than any other. Another pro-life move in support of the vulnerable would be for the state to release hundreds of millions of dollars in unspent welfare funds. And serious efforts need to be made to improve the state’s poor maternal and infant mortality rates, especially the widening health disparities for women of color, who are 2–3 times more likely to die in childbirth than white women. An abortion ban will only exacerbate these disparities, and Ohio will fall further behind.

Where we now are is an untenable place to be, and now that I’m awake, I will commit to taking action to stop these regressive policies. For many of us, we are fighting for our lives.