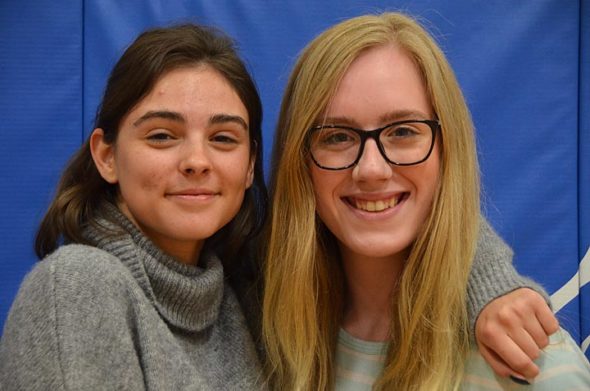 Yellow Springs High School graduating seniors Lily Bryan, left, and Alex Ronnebaum have been chosen by a committee of teachers and staff to be the 2019 student speakers at commencement on Thursday, May 30. The two will fill the spots historically held by the class valedictorian and salutatorian, rankings eliminated by the district last year. (Photo by Carol Simmons)

With just a week until commencement, graduating seniors Lily Bryan and Alex Ronnebaum haven’t fully grasped that their high school career is soon coming to an end.

“I think it will hit when we’re actually there [at graduation],” Ronnebaum said in an interview Tuesday morning, after the conclusion of the school’s annual scholarship and awards assembly.

Ronnebaum and Bryan, who were recipients of a number of the awards distributed this year, have also been chosen to be the 2019 student speakers at commencement exercises Thursday, May 30.

They will fill the spots historically held by the class valedictorian and salutatorian, rankings eliminated by the district last year.

Despite their awards and recognitions, both seniors said they feel that they are representative of the wider school body, where they said involvement and achievement are norms.

“It’s not unique to us,” Ronnebaum said. “Everyone is involved in at least two activities.”

For Ronnebaum’s part, she took part in the student review board and SPIDEE, played bassoon in the school’s music program and was co-captain of the varsity volleyball team, among other extra-curriculars at school and elsewhere.

Bryan this year alone was on the speech and debate team, performed in the theater production “Girls Like That” and was co-captain of the softball team.

“You kind of switch on and off between clubs in different years,” she said.

Both students agreed that they valued the opportunity to participate in a range of experiences that might not have been available to them at a larger or more restrictive school.

Ronnebaum came to the district as an eighth-grader through open enrollment. She said her mother, Brenda Ronnebaum, had been a student teacher at Mills Lawn and wanted her two daughters to have the kind of educational experiences she saw here.

Alex, whose family lives in Beavercreek, is grateful for her mother’s decision.

“I love it here,” she said. “I can’t imagine  having gone somewhere else.”

“I can’t compare it to anywhere else,” she said.

Nevertheless, she said she was keenly aware of a sense of community support surrounding her throughout her growing up years.

“I will cherish that for the rest of my life,” Bryan said.

Her most immediate plans are to attend Barnard College in New York City this fall. She said she’s undecided about a major, but she’s considering pre-med.

Ronnebaum, who is active in regional First Robotics programs, will be attending The Ohio State University, where she will study humanitarian engineering and computer engineering.

She said she wants to create systems to improve living conditions around the world. Next December, she’ll be going to Rwanda to help start a robotics program at a school that has a relationship with Yellow Springs High School’s French  classes.

More than 35 separate scholarships and awards were distributed Tuesday morning during the 2019 end-of-year ceremony.

“Today we distributed $196,668 — which is remarkable,” Principal Jack Hatert told the students and guests.

Those awards and their recipients were:

Odd Fellows Scholarships: $4,500, divided between Lily Bryan, Alex Ronnebaum and David Walker, with $750 each; Kayla Brown, Zach Lugo, Dylan Rainey and Cierra Richeson, with $500 each; and Harper Mesure, with $250.

Nancy & Andrew Bent Scholarship: Given to a student with a “high aptitude in science,” $2,000, Jude Meekin.

GEM (Go the Extra Mile): Recognizing seniors who have displayed “sustained efforts and perseverance,” according to Yellow Springs Mayor Pam Conine, who announced the award; $1,000 each, Kelli Baxter, Raven Campbell and Harper Mesure.

James A. McKee Scholarship: In memory of the former police chief, who was the first black municipal police chief in Ohio; $3,500, David Walker.

Bulldog Scholarship: Initiated by a former student, who wishes to remain anonymous, while a sophomore in college; $1,000, Lily Bryan.

Kahoe/Scott: Recognizing a student who plans to continue in an educational program that is completed in fewer years than a four-year degree; $500, Harper Mesure.

Connect to Success: A new award established by local company Electroshield and distributed by the Yellow Springs Community Foundation, the award supports a first-generation college student for up to five years; $500 a year, Dylan Rainey.

Martha Dell Cadow and Warren Dell: Honoring a sister and brother who attended Yellow Springs High School in the 1930s and excelled in basketball and golf; $500, Andrew Clark.

Leadership Spirit Scholarship — 50th class reunion scholarship: Created in 2016 by the class of 1966 and continued by each successive class to honor a graduating senior who exhibits exemplary leadership qualities; $2,000, Dylan Rainey.

YSCF Youth Philanthropy Award: $300 to a charity of the student’s choice, Alex Ronnebaum, who has chosen Yellow Springs Youth Orchestra.

Bausch & Lomb Award: $7,500 a year for a student who chooses to attend the University of Rochester, Sam Nielsen.

Honda/OSU STEM Award: $3,000 for a student of science, technology or engineering to attend The Ohio State University, Olivia Snoddy.

Rensselaer Medal: Awarded with the promise of $100,000 if the student chooses to attend Rensselaer Polytechnic Institute, Phillip Diamond.

Academic letters, which recognized athletes with a 3.5-grade point average or higher, were distributed to 23 freshmen, two sophomores, six juniors and three seniors.

Pins, for students who had received a letter in a previous year, went to 15 sophomores, 11 juniors and 14 seniors.

Ninth-grader Stella Lieff was recognized as the lone student to achieve perfect attendance this year.

“You will always be Bulldogs,” school counselor Dave Smith told the visiting students.

The commencement ceremony for the Yellow Springs class of 2019 is scheduled Thursday, May 30, beginning at 7 p.m., in the school gym.

For more information about individual class members, see the annual senior supplement in this edition of the News.